Temperatures were well below average in many parts of the country, with Babbitt, Minnesota reporting -38 Celsius.

A blast of Arctic air gripped the vast middle of the United States on Monday with the coldest temperatures in two decades causing at least four deaths, forcing businesses and schools to close and canceling thousands of flights.Shelters for the homeless were overflowing due to the severe cold described by some meteorologists as the "polar vortex" and dubbed by media as the "polar pig."Temperatures were 20 to 40 degrees Fahrenheit (11 to 22 degrees Celsius) below average in parts of Montana, North and South Dakota, Minnesota, Iowa, Wisconsin, Michigan and Nebraska, according to the National Weather Service. 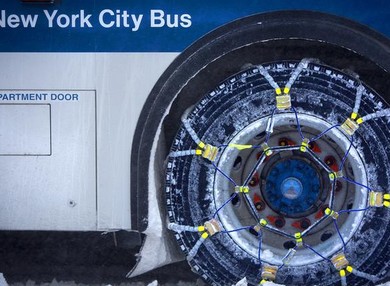 New York City buses cope with the icy conditions. (Reuters)Babbitt, Minnesota, was the coldest place in the United States on Monday at minus 37F (minus 38.3C), according to the National Weather Service. It was chillier even than Mars in recent days, where NASA's rover Curiosity showed a high temperature on Jan. 2 of minus 32.8F (minus 36C).The US cold snap outdid freezing weather in Almaty, Kazakhstan, where it was minus 8F (minus 22C), Mongolia at minus 10F (minus 23C) and Irkutsk, in Siberia, at minus 27F (minus 33C).More than half the flights at Chicago's O'Hare International Airport were canceled as fuel supplies froze, leaving crews unable to fill aircraft tanks. The afternoon temperature in Chicago was minus 12F (minus 24C). 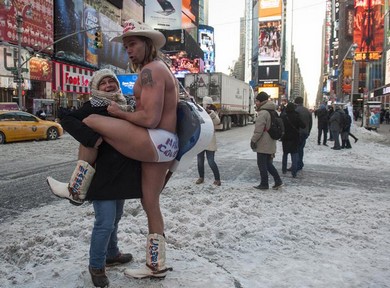 The Naked Cowboy in Times Square entertains revelers. ReutersThe polar vortex, the coldest air in the Northern hemisphere that hovers over the polar region in winter but can be pushed south, was moving toward the East Coast where temperatures were expected to fall into Tuesday. The cold air mass originated over Siberia, the National Weather Service said on its website.The coldest temperatures in years and gusty winds were expected as far south as Brownsville, Texas, and central Florida, the National Weather Service said.The Northeast experienced unseasonably mild weather and rain, but authorities warned travelers to expect icy roads and sidewalks on Tuesday. Amtrak planned to operate its trains on a reduced schedule throughout the Northeast corridor on Tuesday, a spokesman said. 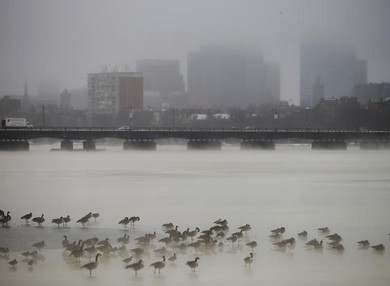 A view of Boston's partially frozen Charles River. ReutersNew York Governor Andrew Cuomo declared a state of emergency, announcing that parts of the New York State Thruway in Western New York would be closed due to extreme winter weather conditions there.At least four weather-related deaths were reported, including a 48-year-old Chicago man who had a heart attack while shoveling snow on Sunday and an elderly woman who was found outside her Indianapolis home early Monday.In oil fields from Texas to North Dakota and Canada, the severe cold threatened to disrupt traffic, strand wells and interrupt drilling and fracking operations. 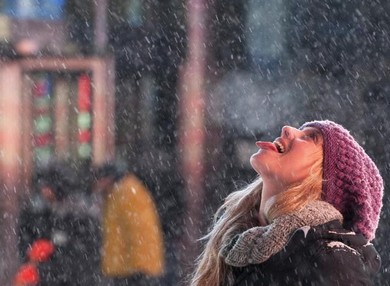 A tourist enjoys the snow in New York. ReutersIt also disrupted grain and livestock shipments throughout the farm belt, curbed meat production at several packing plants and threatened to damage the dormant wheat crop.In Cleveland, Ohio, where the temperature was minus 3F (minus 19C) and was forecast to drop to minus 6F (minus 21C) overnight, homeless shelters were operating at full capacity. Shelter operators had begun to open overflow facilities to accommodate more than 2,000 people who had come seeking warmth."There are also going to be people that won't go into the shelters," said Brian Davis, an organizer with Northeast Ohio Coalition for the Homeless. Frostbite can set in within minutes in such low temperatures, according to experts.The National Weather Service issued warnings for life-threatening wind chills in western and central North Dakota, with temperatures as low as minus 60F (minus 51C). 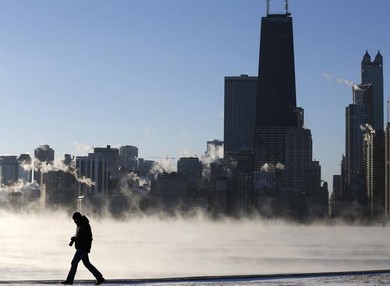 Steam rises from Lake Michigan as Chicagoans brave Arctic weather. ReutersSome 4,000 flights were canceled and 7,500 delayed, according to FlightAware.com, which tracks airline activity.Many airlines could not allow their ground crews to remain outdoors for more than 15 minutes at a time. There were hundreds of cancellations by airlines including United, Southwest , and American."The fuel and glycol supplies are frozen at (Chicago O'Hare) and other airports in the Midwest and Northeast," said Andrea Huguely, a spokeswoman for American Airlines Group. "We are unable to pump fuel and or de-ice."After five days of scrambling to catch up from storm delays, JetBlue said it would halt operations at three airports in the New York area and Boston Logan International Airport from 5 p.m. EST (2200 GMT) Monday until 10 a.m. EST (1500 GMT) on Tuesday to give crews time to rest.The bitter cold combined with blowing snow was complicating rail traffic as well. Union Pacific, one of the largest railroads and a chief mover of grains, chemicals, coal and automotive parts, warned customers on Monday that the weather was causing delays up to 48 hours across Illinois, Iowa, Minnesota, Missouri and Wisconsin.Following last week's storm that dumped up to 2 feet (60 cm) of snow on parts of New England, some shoppers opted for the comforts of home rather than venturing out.Many people did not have the luxury of staying home.In the western Chicago suburb of Geneva, Beth Anderson, 38, was shoveling the remains of Sunday's snow from her driveway before sunrise on Monday while warming up her pickup truck for the short drive to her job at a mall."I just wish I could get the day off too but it would take more than a bit of weather to close down the mall where I work," she said.
Advertisement
Subscribe for our daily newsletter