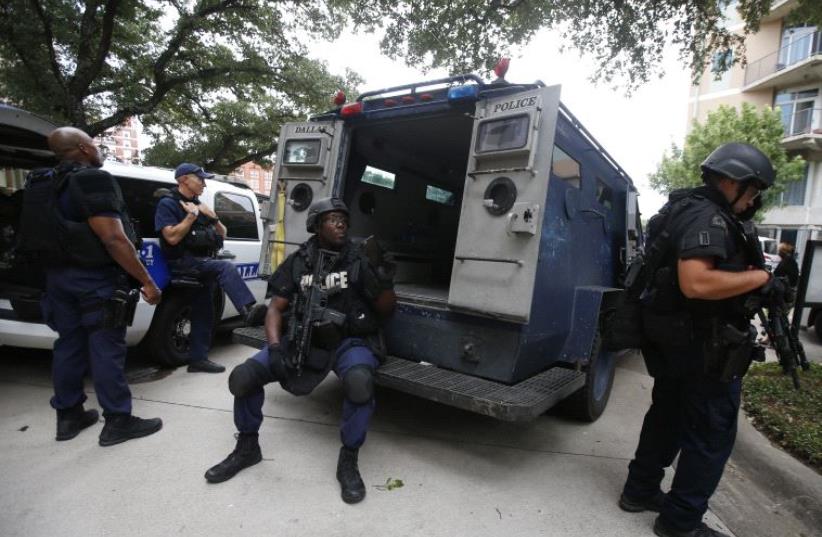 Texas police SWAT team members [File]
(photo credit: REUTERS)
Advertisement
A gunman killed a woman and seriously wounded three others in Austin early on Sunday when he shot into a crowd as people streamed out of nightclubs in the Texan capital's downtown area, police said.The unidentified gunman opened fire at about 2:15 a.m. local time before fleeing, Austin police chief of staff Brian Manley told reporters. The motive for the attack was not immediately clear."It was a very chaotic scene," Manley said. He described people emerging from nightclubs running in all directions at the sound of gunfire, as police officers on patrol rushed to the scene.The gunman killed a woman in her 20s and wounded three other women, who were transported to a local hospital with injuries that are serious but not life-threatening, Austin-Travis County Emergency Medical Services spokesman Mike Benavides told reporters.


Manley said police were seeking help from the public, including any video recordings, in an effort to find the shooter who is believed to be in his 20s.Minutes after that shooting, a man opened fire several blocks away in a confrontation at a parking garage, Manley said. Bystanders tackled the shooter, he said.Police initially believed the two shootings were related and that they were dealing with an "active shooter," but that was not the case, Manley said.


"From everything we can tell at this point through the initial investigation, these are two unrelated incidents," Manley told reporters.The suspect who opened fire in the parking garage was transported to a hospital for injuries he suffered when bystanders subdued him, Manley said. There were no reports of anyone being struck by bullets in that incident.The shootings in the Texas state capital follow several recent major acts of gun violence in the United States.On June 12, a gunman who sympathized with Islamist extremist groups killed 49 people at a nightclub in Orlando, Florida, in the deadliest mass shooting in modern US history.On July 7, a US military veteran shot and killed five police officers in Dallas in the deadliest day for US law enforcement since the Sept. 11, 2001, attacks. Just over a week later another gunman killed three officers in Baton Rouge, Louisiana. The attackers in all three incidents were killed by police.Austin, whose downtown area is known for its lively music scene, has a population of more than 900,000.