The European Commission is to hold a "political debate" on the rule of law in Poland later this week. 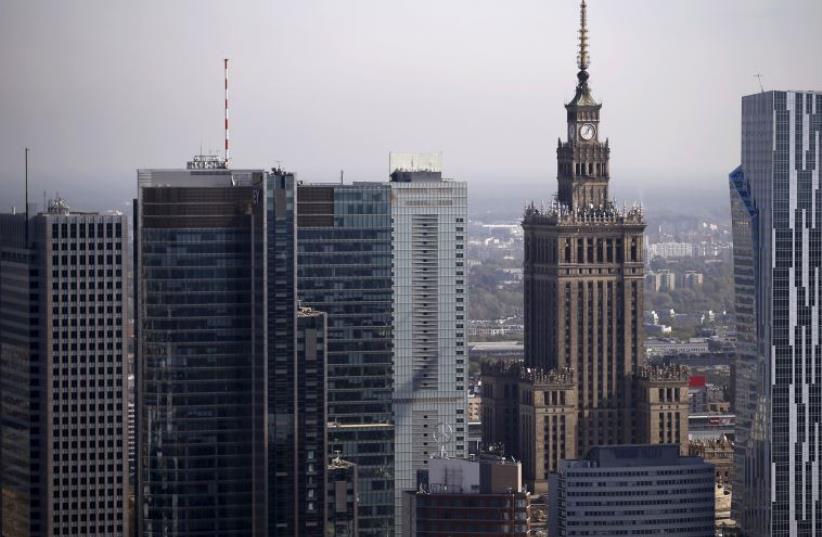 A general view of the cityscape, with the Palace of Culture and Science (2nd R), is pictured from the construction site of a new skyscraper in Warsaw, Poland October 2, 2015.
(photo credit: REUTERS)
Advertisement
WARSAW - Poland's foreign minister on Sunday summoned the German ambassador to a meeting over what his department called "anti-Polish comments by German politicians," the conservative Warsaw government's latest broadside at Berlin.Foreign Ministry spokesman Artur Dmochowski said German envoy Rolf Nikel had received a "polite invitation" to a meeting with Foreign Minister Witold Waszczykowski at midday on Monday."It's not about one concrete comment, there are quite a few of them," he told TVN24 news channel.Poland's relations with both Germany and the European Union (EU) have deteriorated since the Law and Justice (PiS) party won elections last October on a platform advocating conservative Catholic values and euroscepticism.The PiS has sought to put public media under direct government control and change the makeup of the constitutional court, prompting protests and accusations from rights activists that it is undermining democratic checks and balances.European Parliament President Martin Schulz compared the actions of the Polish government with those of Russian President Vladimir Putin in comments to German newspaper Frankfurter Allgemeine Sonntagszeitung on Sunday."The Polish government sees their election success as giving them a mandate to put the will of the successful party, whether on policy or personnel, above that of the interest of the state. That is a type of Putin-style managed democracy, a dangerous 'Putinisation' of European politics," he said.A week ago, Gunther Oettinger, the German EU commissioner responsible for the digital economy and society, said that Warsaw should be put under the EU's rule-of-law supervision.On Saturday, Poland's justice minister dismissed Oettinger's call as "silly" in a confrontational letter, questioning Berlin's own record on media freedoms and alluding to Nazi Germany's occupation of Poland in World War Two.The European Commission is to hold a "political debate" on the rule of law in Poland on Jan. 13, reflecting growing concern the PiS government is eroding democracy in the EU's largest eastern member state.Until recently, Poland was seen as a poster child for post-communist transformation.Last week, Poland invited the European Commission's Warsaw representative to the foreign ministry to discuss EU concerns, which the government says are groundless.