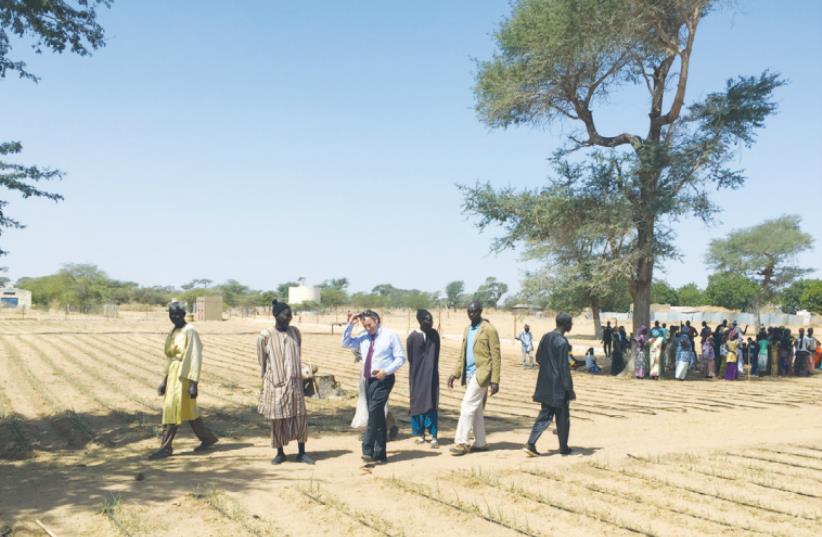 WOMEN IN the Senegalese village of Darou Fanaye sing and dance as Ambassador Paul Hirschson inspects an Israelisupported drip irrigation project.
(photo credit: SETH J. FRANTZMAN)
Advertisement
DAKAR – Paul Hirschson likes to tell a story about a European diplomat he met after being posted as Israel’s ambassador to Senegal last year. What will things be like in 50 years, he asked his counterpart? “The same.” And what will we be doing? “The same.” But for Hirschson, this cynical view of the future in West Africa is unacceptable.As our Hyundai SUV speeds down a dirt road throwing up clouds of dust, Hirschson describes Israel’s connection to this region. “Israel is a small country. Other countries may give money but we specialize in aid in kind, which is providing expertise and training.The value of our in-kind contribution of expertise actually doubles the value as opposed to just giving cash.”With a GDP more than 20 times that of Senegal, Israel is well placed to provide advice and training, especially in the agricultural sector. “If there is development here and the economy grows, there is potential for authentic partnership,” says Hirschson, who represents Israel in both Senegal and neighboring Gambia, as well as in nearby Guinee-Bissau, Sierra Leone and Cape Verde. One of the hallmarks of this partnership is an aid program Israel has embarked on to support rural development in Senegal, a country of 14 million people.The concept behind the project was conceived years ago and is known by the acronym TIPA (Technology, Innovation and Poverty Alleviation). In Senegal, the Israeli Embassy began by partnering with local universities to provide training in rural agriculture technologies, specifically drip irrigation which Israel has pioneered, and which works well in Senegal’s tropical climate.Hundreds of Senegalese have come to Israel through the MASHAV – Israel’s agency for International Development Cooperation, which is part of the Foreign Ministry.On Friday, Hirschson and the local MASHAV representative, Tammy Erann-Soussan, signed a cooperation agreement with the Université Alioune Diop de Bambey, which is located in a quiet town two hours east of Senegal’s capital of Dakar. In a ceremony attended by 50 people, including Foreign Ministry cadets and local agronomists as well as university officials, Israel pledged to partner with the school to build a model farm where agriculture students can work the land in practice as well as theory. Already Israel is working with four other universities here to provide this hands-on training.Aminata Toure, a former prime minister and currently adviser to President Macky Sall of Senegal, says these kinds of projects have potential to help her country which is struggling with unemployment and agricultural output. “We would like to strengthen the agricultural connection with Israel because Israel is one of the most successful countries promoting agriculture in a friendly environment...We look forward to getting Israeli investors to come and see the opportunities.” Toure notes more than 600 Senegalese have gone to Israel for training in agriculture and other fields.In a meeting on Friday between Hirschson, Erann-Sassoun, an Israeli MASHAV consultant named Omar Zeidan and the local minister of agriculture, Dr.Papa Abdoulaye Seck, the minister expressed hope that this project will succeed.“Your country is in a difficult environment but you make the difference due to knowledge, technology and willingness to transform the environment,” he said. The problem local farmers face is a lack of knowledge and understanding new technology. He said that for decades money was invested in agriculture but the lack of training harmed the results. Contrasting drip irrigation beside the old technique is the best way to show people, he said.Two hours east of Dakar, in the village of Darou Fanaye far removed from the electricity and paved roads of the capital, a large, square field has been fenced off. Dozens of families are busy tending their newly planted green onions and okra sprouting from the ground in long rows. Under a joint Israel-Italian-Senegalese project, this farm will provide 1,000 square meters (0.1 hectare) to 50 families. Each parcel produces several tons of food a year in four to six harvests.Drip irrigation tubes line the landscape, and the farmers are proud of their accomplishments.With support from the Agriculture Ministry, Israel plans to aid 4,000 similar small family farms. For the local Senegalese, there is excitement.The women of Darou Fanaye are singing and dancing as the Israeli delegation and local magistrates wander around the rows of newly planted earth.It’s not every day an Israeli ambassador gets a reception like this, especially in a country that is 95% Muslim.“The sustainable development issue is not the only reason we are here, and not the primary reason I wanted to come,” says Hirschson. “We do this because this is the right thing to do.” But it’s not just to provide aid to farmers.The larger picture is that these farmers will reach a critical mass where more Senegalese will want this technology, and they will partner in private investment with Israelis to purchase the drip irrigation, he adds.A short drive away is another model farm at the village of Touba Toul. Here 50 families have each received 650 sq.m.of land. Their plots yield several tons of crops a year using Israeli technology. The men and women are weeding amid the beautiful baobab trees, which are an icon of Senegal.With many of their younger relatives in the capital searching for work, this farm is a bright spot of success in this area.The hurdle Israel faces is that it cannot do projects of this scale on its own. The country must partner with other states. Outside of several projects run specifically through the embassy, there is a wait to see if the ambitious dreams being established will last. Zeidan, a recent retiree from Israel’s Agriculture Ministry who is working as a consultant here, is impressed by what he sees.“It is very important and I hope it will succeed. This is just the beginning, and each of these farms must be coordinated.”