Saudi Arabia was backed by 47 of 54 nations, according to UN Watch. 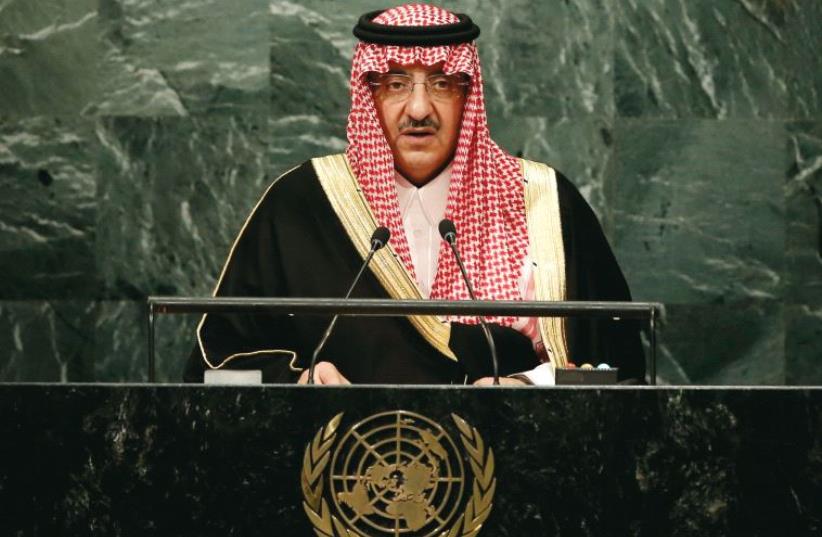 Crown Prince Mohammed bin Naif bin Abdulaziz Al-Saud of Saudi Arabia addresses the United Nations General Assembly in the Manhattan borough of New York on September 21
(photo credit: REUTERS)
Advertisement
AMSTERDAM — A Dutch ethics adviser who urged a large pension group to divest from Israel defended the election of Saudi Arabia as a member of the UN Commission on the Status of Women.­­­Cees Flinterman, who according to the Dutch Jewish community’s main pro-Israel group had a key role in the 2014 divestment of the PGGM pensions group from Israeli banks over alleged human rights violations in the Jewish state, advocated during a television interview in the Netherlands for Saudi Arabia’s controversial election on April 22.The election, which was condemned by watchdog groups citing Saudi Arabia’s dismal record on women’s rights, “is used by women and women’s organizations and by the Human Rights Commission to slowly improve women’s situation,” the NOS public broadcaster quoted Flinterman, a retired law professor, as saying.Esther Voet, the editor-in-chief of the Nieuw Israëlietisch Weekblad Jewish weekly, called Flinterman’s defense of the move “the height of hypocrisy.” Whereas criticism of Israel is not uncommon in the Netherlands, “defense by serious human rights activists for the absurdity of Saudi Arabia’s election is highly unusual and, in Flinterman’s case, a glaring case of double standards on Israel,” she told JTA.In Saudi Arabia, most women have a male guardian who makes critical decisions on their behalf in what the UN Watch group said amounted to ”controlling a woman’s life from her birth until death.” Saudi Arabia bans women from driving cars, making it the “world’s leading oppressor of women to promote gender equality and the empowerment of women,” UN Watch director Hillel Neuer said in a statement about Saudi Arabia’s election.Flinterman is a member of The Rights Forum, an organization critical of Israel that was set up by former Dutch Prime Minister Dries van Agt. Van Agt, who spoke at conference that featured a televised address by Hamas leader Ismail Haniyeh, has said that Jews should have gotten a state in Germany instead of what is today Israel, and has called for trying Israeli Prime Minister Benjamin Netanyahu for war crimes.The Central Jewish Board of the Netherlands said in a statement that it was “astonished” both by the vote and Flinterman’s support for Saudi Arabia’s successful bid to join the commission.Saudi Arabia was backed by 47 of 54 nations, according to UN Watch. France, Sweden, Norway, the United Kingdom and Belgium were among the European nations that supported the Saudi bid, according to the group.On Thursday, Belgian Prime Minister Charles Michel told parliament he “regrets” his nation’s support, which he said was given without proper consideration on the part of Belgian diplomats. Michel said this while replying to critical queries submitted by several Belgian lawmakers over the vote.