Ceremony goes ahead despite cancellation rumors. 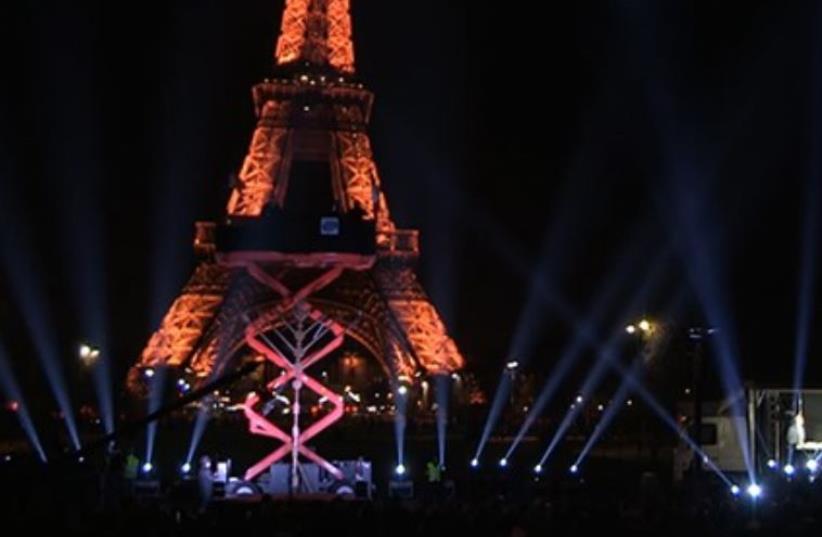 Menorah at base of Eiffel Tower, December 6, 2015
(photo credit: CHABAD.ORG)
Advertisement
Just weeks after Paris saw some of its darkest days, around 6,000 people gathered to add some much needed light to the city on Sunday by lighting the hanukkia at the foot of the Eiffel Tower, celebrating the first night of Hanukka.Defying reports that Hanukka ceremonies across the country would be cancelled due to security concerns, Chabad kept true to the decades old tradition both in Paris and across France."Hanukka celebrates the freedom of expression, both individually and collectively. It demonstrates the superiority of light over darkness, of right over might, of hope over fear,” an official said at the ceremony.Along with members of the Jewish community, representatives of the Paris city council and national government were in attendance. French Chief Rabbi Haim Korsia was honored with lighting the first candle beneath the iconic structure.Video footage was also shown from simultaneous ceremonies in Jerusalem and Netanya, which is known for its large French expat community.The Eiffel Tower is one of around 100 locations in France where the hanukkia will be lit in public, despite the tensions. Further afield, Chabad have planned around 15,000 public lightings in more than 80 counties around the world, including in front of landmarks such as the White House, the Brandenburg Gate and the Kremlin.