Livingstone, who claimed that Hitler supported Zionism, decided to remove himself from the party after being suspended from it for 2 years. 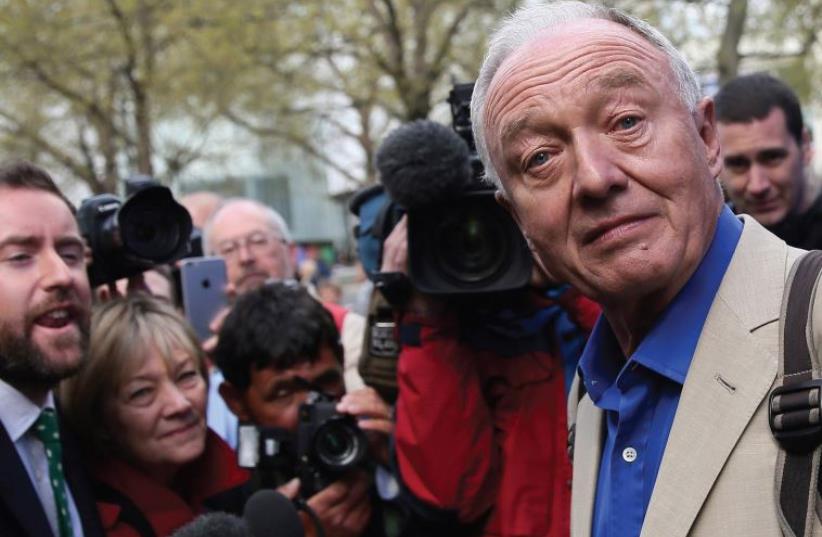 Former London mayor Ken Livingstone speaks to the media after giving an interview to the LBC radio station in London in which he refused to apologize for comments suggesting Adolf Hitler supported Zionism
(photo credit: REUTERS)
Advertisement
Former London Mayor Ken Livingstone announced on Monday he was leaving the UK's Labour Party amid the ongonig antisemitism scandal that has plagued its ranks. In a statement on his website, Livingstone wrote that he "decided to resign from the Labour Party," adding that the "ongoing issues around my suspension from the Labour Party have become a distraction." His website is currently unavailable due to the large number of internet users attempting to access it. In 2016, Livingstone was suspended from the party for statements he made publicly claiming that the architect of the Holocaust, Adolf Hitler, supported Zionism. He repeated the same claim a year later, leading the party to lengthen his suspension, though they did not outright expel him. “Let’s remember when Hitler won his election in 1932, his policy then was that Jews should be moved to Israel. He was supporting Zionism – this was before he went mad and ended up killing six million Jews,” Livingstone said during an interview with BBC radio.Labour Leader Jeremy Corbyn has come under fire for years for what some perceive as antisemitic comments, as well as his stance as an apologist for terrorist organizations. Earlier this year, he deleted his personal Facebook account after it became known that he was a member of several antisemitic groups on the social media site and had actively participated in them. He has made statements disavowing antisemitism within his party, but the UK's Jewish community has remained unconvinced by his statements, and have participated in various protests against his continued leadership. In February, the party suspended Jewish activist Tony Greenstein for his comments referring to Jews as Nazis. On his social media and personal blog, Greenstein regularly referred to those who disagreed with him as "Zio idiots" - referencing a shortened version of the term Zionist, most often used in a derogatory context - and referred to Jews as "zios." Tamara Zieve contributed to this report.