"It should be our common aim to coordinate our actions against Daesh and for sure the cooperation between the United States and Russia is a crucial one," Donald Tusk said 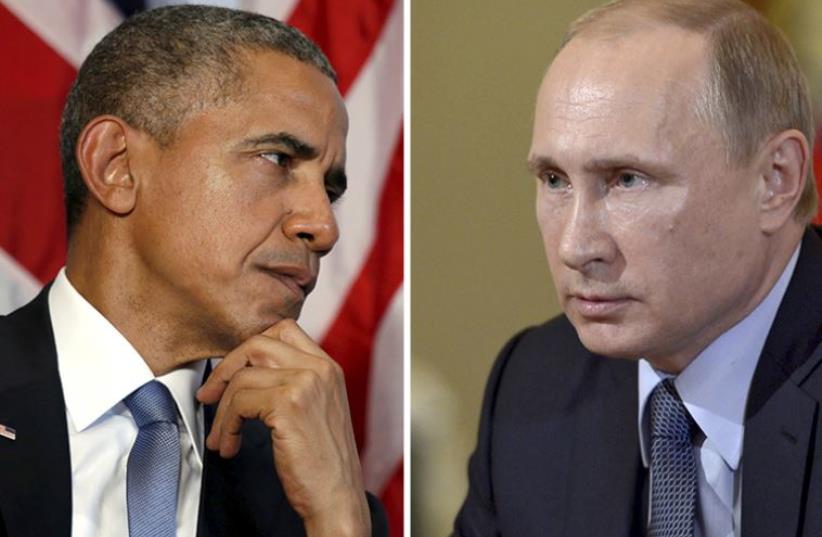 Obama and Putin
(photo credit: REUTERS,JPOST STAFF)
Advertisement
BELEK, Turkey - The United States and Russia must cooperate in fighting Islamic State in Syria, the president of the European Council said on Sunday, stressing Russia should focus its military actions there on the radical Islamists and not the Syrian opposition.At a news conference on the sidelines of a summit of world leaders in the Turkish coastal province of Antalya, Donald Tusk said that Russian bombing of President Bashar al-Assad's opponents was only increasing the wave of refugees to Europe."It should be our common aim to coordinate our actions against Daesh and for sure the cooperation between the United States and Russia is a crucial one," Tusk said, referring to the Arabic acronym for Islamic State."But we need not only more cooperation, but also more good will, especially from Russian action on the ground in Syria. It must be focussed more on Islamic State and not - because we cannot accept it - against the moderate Syrian opposition," Tusk said.Europe is facing an inflow of 1 million refugees from the Middle East and Africa this year alone as a result of the Syrian conflict, which pits the forces of Islamic State, Assad and the Syrian opposition against each other.Russia joined the conflict a month and a half ago with air strikes in Syria, but has been targeting mainly areas controlled by forces opposed to its long-term ally Assad, rather than by Islamic State."We have no doubt that from actions against the Syrian opposition the only result will be a new wave of refugees and we have started seeing that, in fact it has started," Tusk said."This is why the cooperation between Russia and other countries, especially the United States, is so important also in this context of the refugee crisis," he said.Russia, the United States and powers from Europe and the Middle East outlined a plan on Saturday for a political process in Syria leading to elections within two years, a day after gunmen and suicide bombers from Islamic State went on a rampage through Paris, killing 129 people.Tusk said that after attacks in Paris, the G20 had to step up efforts to cut off financing to terrorists."Terror networks cannot plan or operate without the money that moves through the financial systems of many countries. Only if we fully cooperate on exchange of information about suspicious transactions, will we be able to stop this threat effectively," Tusk said.