Europe says ‘no’ to Turkey

EU report slams into the usage of state of emergency in Turkey,claims it fosters a climate of fear among ordinary people. 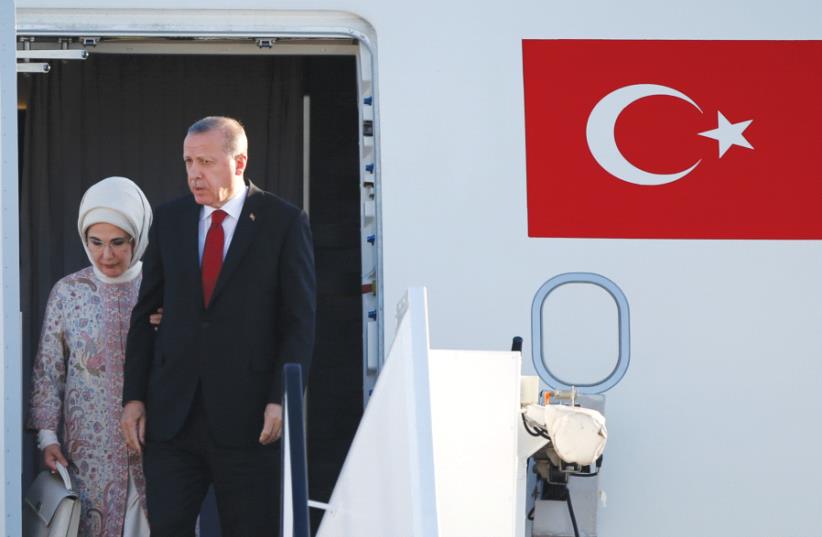 TURKISH PRESIDENT Recep Tayyip Erdogan and his wife, Emine, arrive for the G-20 leaders summit in Hamburg, Germany.
(photo credit: REUTERS)
Advertisement
Last Thursday’s vote in the European Parliament signaled the end of Turkey’s hopes of membership in the European Union.Or rather, the 477 members (out of the 638 present) that voted for a suspension of accession negotiations with Turkey was a resounding “no” to one-man rule under Turkish President Recep Tayyip Erdogan.But the outcome should come as no surprise, given the tension between the EU and Turkey in connection with April’s referendum. As Erdogan has admitted, since he was mayor of Istanbul in the 1990s he had planned for an executive presidency which would concentrate all power in the hands of one person, and now he has it.The 18 constitutional amendments which 51.4% of Turks voted for remove any effective checks and balances and give Erdogan control of the levers of power.Membership of the EU, which at present consists of 28 member states, requires the fulfillment of certain criteria, including stability of institutions guaranteeing democracy, the rule of law, human rights and respect for and protection of minorities. In 2004 the EU decided that Turkey had “sufficiently” fulfilled these criteria to begin membership negotiations the following year.Another precondition for membership talks is that the candidate country has to exit the monitoring process by the Council of Europe, which consists of 47 member states, including Turkey. Turkey also did this in 2004. However, shortly after the referendum PACE (Parliamentary Assembly of the Council of Europe) decided to reopen the monitoring procedure in Turkey because of a serious deterioration in the functioning of democratic institutions in the country.These include the declaration of a state of emergency, which has enabled Erdogan to rule by decree since the failed coup last July. According to Erdogan, what was originally introduced as a temporary measure will continue until Turkey under his rule has achieved “welfare and peace.” According to PACE, measures have gone far beyond what is necessary and proportionate. To date, some 155,000 people have been detained, 50,000 have been jailed and 140,000 dismissed from their jobs on suspicion of having been involved in the coup. Those dismissed include a third of the judiciary, a tenth of the police force, 7,800 military officers, over 8,000 academics and 33,000 teachers, not to mention 942 companies that have been seized and their assets confiscated.Those dismissed have had their passports confiscated, they are banned from working again in public administration, they and their families have no access to social security and they are condemned to a “civil death,” ostracism in the community.As PACE concludes, “The state of emergency has been used not only to remove those involved in the coup from the State institutions, but also to silence any critical voices and create a climate of fear among ordinary citizens, academics, independent nongovernmental organizations (NGOs) and the media, jeopardizing the foundations of a democratic society.”The European Parliament’s report is equally critical and raises the question of what kind of relations between Europe and Turkey can replace the prospect of EU membership.The overwhelming support for the proposal to suspend accession negotiations without delay is hedged with the proviso “if the constitutional reform package is implemented unchanged.” However, there is no likelihood of that not happening.A report by the Venice Commission, the Council of Europe’s advisory body, found that the constitutional amendments were “a dangerous step backwards” and a “degeneration” of Turkey’s constitutional democratic tradition.Unsurprisingly, Erdogan has told Europe: “We do not recognize your reports. We will not recognize them in the future either.”The Parliament’s resolution reflects a remarkable degree of unanimity when it comes to condemning human rights abuses in Turkey. The problem lies in the fact that there is a conflict of views between the European peoples’ elected representatives, the members of the European Parliament and the appointed members of the European Commission, the EU’s unelected government. In her introduction to the report, the Parliament’s rapporteur on Turkey, Kati Piri, called on the Commission and the EU’s leaders to “stand up for our own values.”After a meeting of the EU’s foreign ministers in Malta in April, the EU’s High Representative (“foreign minister”) Federica Mogherini declared, “We respect the result of the referendum,” and stated “the accession process continues, it is not suspended nor ended,” which is at odds with the Parliament’s resolution.Characteristically, Erdogan has given the EU an ultimatum and said that if the EU doesn’t continue the negotiating process, then goodbye. But cash-strapped Turkey is hardly in a position to turn its back on a major trading partner and foreign investor.Consequently, the most important item on Turkey’s agenda is an update of the Customs Union agreement with the EU, and as Kati Piri has noted, this is perhaps the only leverage the EU still has to make Turkey commit to European standards.

The author is a commentator on Turkish affairs in the Danish and international press.