Europeans resilient in face of terrorism, though nowhere seems secure

“It’s nice to see support from everywhere else – to know that you’re not alone.” 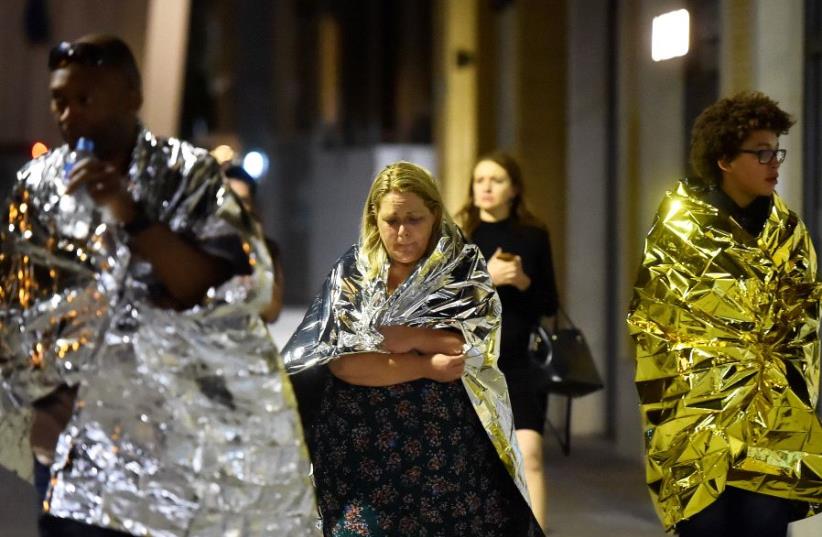 People flee as police attend to an incident near London Bridge in London
(photo credit: REUTERS / HANNAH MCKAY)
Advertisement
BERLIN – A small but touching tribute to the victims of Saturday’s terrorist attack in London drew the attention of passersby outside the British Embassy to Germany in Berlin on Monday.Foot traffic was high along the thoroughfare located in the heart of the German capital, but a sentiment shared by tourists and locals alike is that nowhere is safe anymore.“The target of terror is to create fear and spread it, which it does. But you know that you have to remain brave and not let it affect you otherwise the terrorists win,” Thea Liversage, a tourist from Copenhagen taking a mini-break in the city with her boyfriend, told The Jerusalem Post.
Cell phone videos show people running for safety after London attack (credit: REUTERS)
She and her travel companion did not let fear prevent their visit to Berlin, which was targeted by a similar attack at the end of last year, when a truck plowed through the Christmas market killing 12 people and wounding 56 others.“We were both scared before we came that Berlin could become a target,” Liversage confessed, though the pair don’t feel safe in their own country either. “I go to school in Copenhagen and it’s also terrifying there, thinking that where you are everyday could become a target for something so awful.”Liversage does not see the situation improving anytime soon. “Terrorism is evolving and there are new forms of terror,” she said, referring to the phenomenon of vehicular attacks, which Israelis have been familiar with for years but which is relatively new to Europe.“And what happened in Manchester was a really awful form of terror where they went for young women,” she added, in reference to the suicide bombing at an Ariana Grande concert last month that killed 22 people.Indeed, a pair of female German youths from Bavaria thought twice about going to a large concert in the city on Sunday night. They attended, along with some 20,000 other people, but couldn’t help feeling scared, aware of other large-scale events which have been targeted, such as the Ariana Grande concert or the Bataclan concert hall massacre in Paris in 2015.Danish teenagers Anna Dietzel and Anna Weiser hail from a small town and say they feel particularly unsafe in big cities like Berlin.Standing before the flowers and candles laid outside the British embassy, and having seen pictures of the Brandenburg Gate lit up with Union Jack on Sunday night, the youngsters say such gestures are important to show solidarity and give strength across borders.A British tourist from Oxford, Melanie Bishop, agreed with this and said, “It’s nice to see support from everywhere else – to know that you’re not alone.”“It’s nice that there is solidarity between the countries because we have all experienced these problems,” echoed Peter Kent of Leeds. “I think we need to pull together because we are all suffering from the same threats.”Kent said the attack was “typical of what’s happening throughout the world.”“I lived in London when the IRA was bombing it. It’s a part of life and has been for a long time,” added his wife, Karen. “It’s just different protagonists and different victims, but the same terror.”Be it the Irish republican violence of the past or Islamic extremism of today, Karen embodies the resilience determinedly displayed by civilians around the world. “They can do what they like, I will never feel unsafe in my own country,” she declared.