Chancellor Christian Kern's Social Democrats (SPO) are in coalition with Kurz's OVP but Kurz ended the alliance when he took over his party in May, forcing Sunday's snap election.

By REUTERS
OCTOBER 15, 2017 11:33
Top candidate of Peoples Party (OeVP) and Foreign Minister Sebastan Kurz arrives in front of his party's headquarters in Vienna, Austria October 13, 2017.
(photo credit: LEONHARD FOEGER / REUTERS)
Advertisement
VIENNA - Austria voted on Sunday in a parliamentary election that could see 31-year-old conservative Sebastian Kurz become chancellor on a pledge to take a hard line on refugees and prevent a repeat of Europe's migration crisis.
Foreign Minister Kurz propelled his People's Party (OVP) to the top of opinion polls when he became leader in May, dislodging the far-right Freedom Party that had led for a year.Kurz says he will shut the main migrant routes into Europe, via the Balkans and the Mediterranean. Many voters say Austria was overrun when it opened its borders in 2015 to hundreds of thousands of people fleeing war and poverty in the Middle East and elsewhere."We must stop illegal immigration to Austria because otherwise there will be no more order and security," Kurz told tabloid daily Oesterreich on Friday.Chancellor Christian Kern's Social Democrats (SPO) are in coalition with Kurz's OVP but Kurz ended the alliance when he took over his party in May, forcing Sunday's snap election.
Conservative Sebastian Kurz"s fresh face may keep Austria"s old conservatives in power, October 13, 2017. (Reuters)
Opinion polls show the conservatives ahead with around a third of the vote and a tight race for second between the Social Democrats and the Freedom Party (FPO), whose candidate nearly won last year's presidential election.Immigration has dominated the campaign. Kurz plans to cap benefits for refugees at well below the general level and bar other foreigners from receiving such payments until they have lived in the country for five years.He also says he wants to shake up Austrian politics, which for decades has been dominated by a coalition between his party and the Social Democrats. His opponents say he is merely a new face on a party in power in various coalitions for 30 years.Leaders of all three top parties warned voters to be skeptical about polling in a bid to improve turnout."You should not pay attention to opinion polls. You should instead go by the atmosphere here," FPO leader Heinz-Christian Strache told cheering supporters at a shopping mall in Vienna on Saturday.The FPO has accused Kurz of copying its ideas and Strache called him an "impersonator." 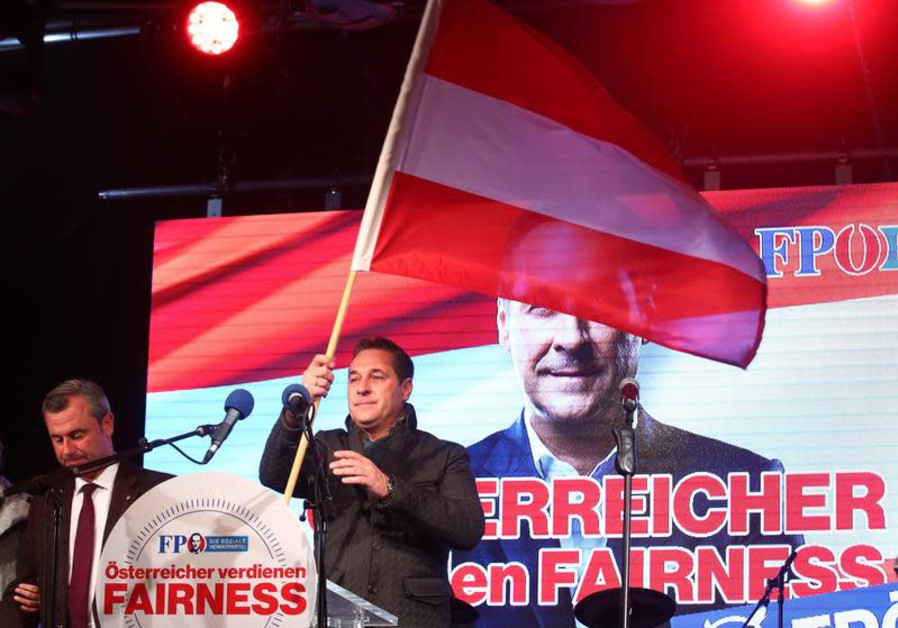 Norbert Hofer (L) and Austrian Freedom Party (FPOe) top candidate Heinz-Christian Strache attend their party's final election campaign rally in Vienna, Austria, October 13, 2017. (REUTERS/Michael Dalder)The Social Democrats were hit two weeks ago by a smear scandal that forced their chairman to step down."You must ... go to your neighbors, go into bars, go to your friends and tell them what is at stake," Kern told a rally in Vienna on Saturday, calling Kurz a candidate of the rich.He warned of a repeat of the OVP-Freedom Party coalition in the early 2000s that was marked by financial scandals.The election winner forms a government that will likely require a coalition with one of the two other main parties. With Kurz and Kern at loggerheads the FPO could play kingmaker.Three smaller parties are polling between 4 percent, which is the threshold for entering parliament, and 6 percent.The last polling stations close at 5 p.m. (1500 GMT) and the first projections are due minutes later. A final count is expected later in the evening, though large numbers of postal ballots could mean final results come on Monday.