Alexandra, 19, from the nearby town of Cagnes-sur-Mer, came to Nice with three other girlfriends to celebrate Bastille Day. 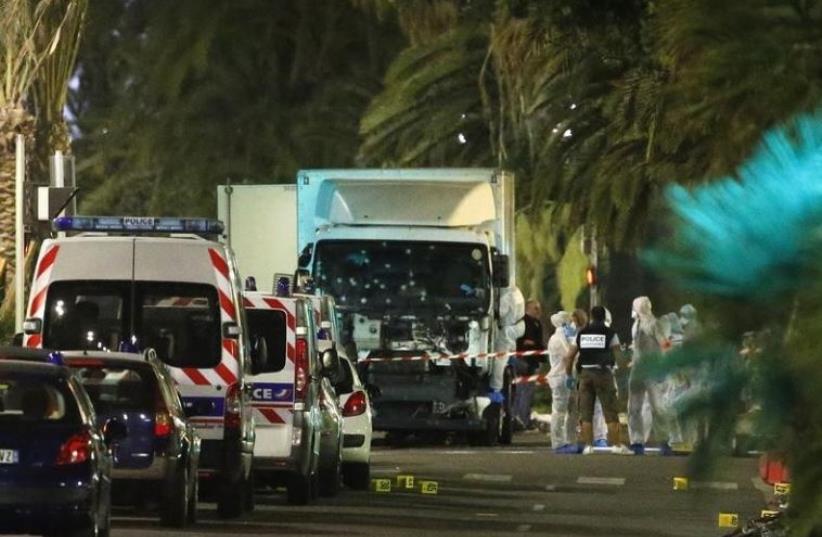 French police forces and forensic officers stand next to a truck July 15, 2016 that ran into a crowd celebrating the Bastille Day national holiday on the Promenade des Anglais killing at least 60 people in Nice, France, July 14.
(photo credit: REUTERS/ERIC GAILLARD)
Advertisement
NICE – Residence of Nice are still in shock after the terrorist attack here on Thursday night, at the famous seaside Promenade des Anglais, in which 84 people were killed and hundreds wounded.Alexandra, 19, from the nearby town of Cagnes-sur-Mer, came to Nice with three other girlfriends to celebrate Bastille Day.“I came here with my friends to watch the fireworks, to have some beers and to stroll along the promenade,” Alexandra said. “We do this every year – it’s like a ritual. The beach here is beautiful, and the atmosphere is always festive. There were hundreds of people around us, lots of families with kids, tourists and young people. Everybody was celebrating, and the atmosphere was festive and calm. We watched the fireworks from the seaside.“Suddenly we heard booms – like shooting.People started running east. So we also ran, until a policeman stopped our group.He told us that we should keep going as far as possible, as they were not sure if the attack was over or not. Further on, another police officer searched us, including our hand bags. Some passersby offered us to stay at their apartment on the beach for a while, so we could calmly call our families.”Dominique, a taxi driver working in Nice, told The Jerusalem Post that he had taken several traumatized tourists in his car, driving them for free back to their hotels.“I was driving not far away from the promenade, on a side street, when I suddenly heard some noises, but I didn’t much think of it,” said Dominique. “I just thought it was the sounds of the traditional July 14 fireworks display. Then people started running all over the place. I saw that many of them were bewildered, and that one of them – a man in his 50s, I think – was crying. I opened the car door and offered to drive them to their hotel. They wouldn’t calm down.”Other witnesses described how the commotion was terrible. Jean B., a father of a little girl and a toddler, came to Nice from Paris on vacation.“The noise was awful,” he said. “People were running and shouting. I took up my two kids, each in one arm, and told my wife to stick with me, that we must run. No one was telling us what was going on. It was just a huge crowd running in all directions. I saw a coffee shop on the sidewalk and walked in – they welcomed us, and called people in the street to come in as well. In there, we felt safe.”Ronen Mordoch, an Israeli, arrived in Nice with his wife and their two sons just minutes before the attack took place.“Our plane was a bit late,” he told the Post. “We rented a car and started driving towards the city. Then we saw a white truck going strangely. We thought there was an accident. Someone stood in the middle of the street and signaled that we should turn to the left – away from the sea side. It was a citizen, not a policeman. He insisted, and prevented us from continuing. I understood that something was wrong and turned left, driving over the middle-street obstacle. My eldest son realized quickly that there was a terrorist attack. We are so lucky. If we would have been just a few minutes earlier there, we would have found ourselves in the middle of it.”Natalie, 27, working at the George Pompidou medical clinic in Nice, was supposed to end her shift at midnight.“I was almost about to leave when we received notification about a serious incident,” Natalie said. “Within minutes, ambulances started bringing in people who were injured. Some people came in on their own, covered with blood. There were others who just wanted to talk to someone and feel secure. Unfortunately, some of those who were gravely wounded didn’t make it. For the moment, all the personnel here are working at full capacity.”

Tags terrorism in france
Advertisement
Subscribe for our daily newsletter