Roman Zozulya was mistakenly reported to be a "neo-Nazi" when he joined Seville-based Betis last summer. 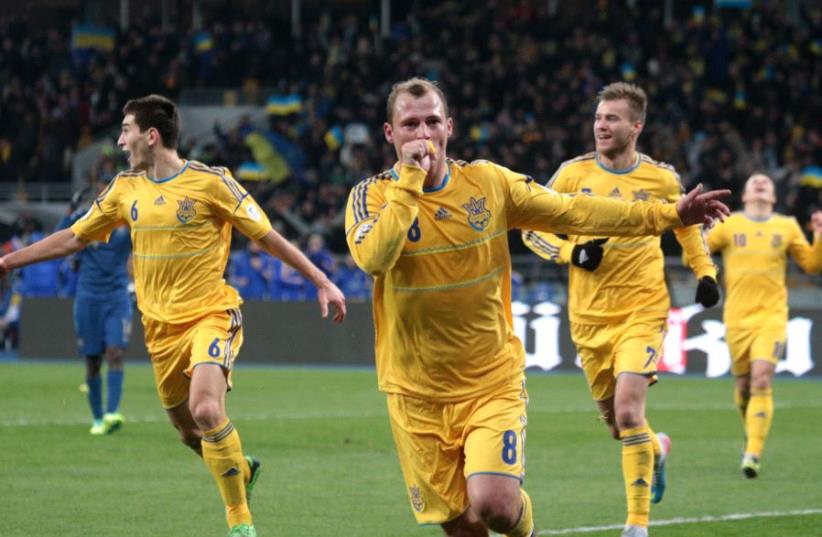 Ukraine's Roman Zozulya (front) celebrates his goal with team mates during their 2014 World Cup [File]
(photo credit: REUTERS)
Advertisement
MADRID - Ukraine striker Roman Zozulya returned to Real Betis hours into a loan move to Rayo Vallecano after he was falsely called a neo-Nazi by his new club's fans.The 27-year-old denied he had links to the far-right in an open letter to supporters of Rayo, who have a large left-wing fanbase, but that did little to quell the rumors.A group of radical fans of the second-tier strugglers showed up at the club's training ground on Wednesday and hurled abuse at the player and held up a banner declaring their town was "not a place for Nazis".Police were called to intervene."The player is very affected, he didn't expect for this to happen," Betis sporting director Miguel Torrecilla told the club's website.Zozulya was mistakenly reported to be a "neo-Nazi" when he joined Seville-based Betis last summer but the association of Rayo supporters' clubs (Plataforma ADRV) have opposed the player's signing.He will now be ineligible to play again this season as league rules state players cannot register for more than two teams in one campaign.In his open letter to fans on Tuesday, Zozulya said: "As I already pointed out during my unveiling at Real Betis, I have no links to paramilitary or neo-Nazi groups."Unfortunately, my arrival in Spain was accompanied by a misunderstanding by a journalist who knows very little about ... my country and my own career."I arrived at Seville airport wearing a shirt with the badge of Ukraine. This journalist reported that I was wearing a shirt from a paramilitary group, whose badge is distinguished from the badge of my country."Betis demanded the article to be removed, which the newspaper did immediately and apologized."Rayo president Raul Martin Presa said Zozulya had returned to Seville on Wednesday but insisted his club would never yield to the pressures of radical groups.He told Onda Cero radio: "He was scared and was in no condition to do his job here."He is a Rayo player. We will talk to the player and to Betis in the coming days and see what the best solution is."