According to the non-profit Lawfare project, SFSU may have violated a US anti-terrorist statute. 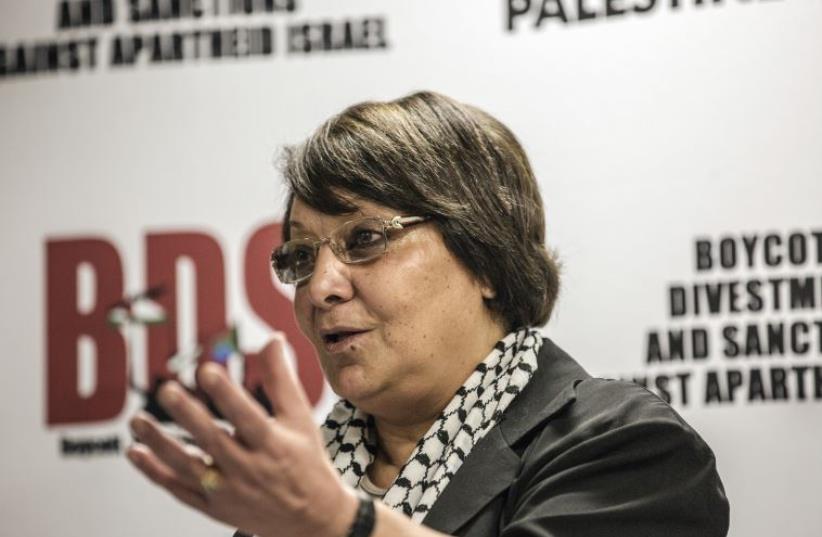 PFPL plane hijacker Leila Khaled in South Africa
(photo credit: AFP PHOTO/GIANLUIGI GUERCIA)
Advertisement
The US Department of Education is probing whether San Francisco State University (SFSU) broke federal rules when they attempted to host an event with Popular Front for the Liberation of Palestine (PFLP) terrorist Leila Khaled, the New York Post reported. The Department of Education has also asked the Justice Department and the US Treasury to examine the case. The Lawfare Project, a non-profit that provides pro-bono legal services on issues of Jewish civil and human rights, pushed for the investigation, the Post reported. “In normal circumstances, people like Leila Khaled would be barred entry into the United States,” Lawfare Project senior counsel Gerard Filitti told the Post. “However, now we’re living in a world in which Zoom and teleconferences and videoconferences are the norm, and it would be a perversion of justice if terrorists were allowed to spread their message and indoctrinate students by Zoom.”According to the Lawfare project, SFSU may have provided material support to terrorists when they offered to give her a platform, potentially violating the 18 USC Section 2339B anti-terrorist statute.An official from the Department of Education told the lawfare project that “SFSU’s conduct concerning Leila Khaled and the Popular Front for the Liberation of Palestine may be subject to the Department of the Treasury’s sanctions authorities” and passed the information to the Treasury and the Department of Justice.The official also told the Lawfare Project that the Department would examine the possibility that SFSU's webinar was in violation of civil rights rules and federal grant conditions. They will decide if to fully investigate the matter within 30 days, according to the Post. Khaled took part in hijacking a plane in 1969 and the mass-hijacking of four flights on September 6, 1970, boarding El Al Flight 219 with her associate Patrick Argüello in order to divert it to a remote airstrip in Jordan. When Argüello was killed by an air marshal during the hijacking, Khaled tried to detonate a grenade which would have killed everyone aboard. Instead, she was subdued, and a few days later exchanged for civilian hostages taken from the other flights hijacked that day.Due to the concerted efforts of lawyers and activists, Zoom canceled SFSU's planned webinar saying “Zoom is committed to supporting the open exchange of ideas and conversations, subject to certain limitations contained in our Terms of Service, including those related to user compliance with applicable US export control, sanctions, and anti-terrorism laws."Donna Rachel Edmunds contributed to this report.