From the best selling book by a famous Israeli publicist, on India of course, to the Israeli singer bringing Indian music to Tel Aviv. 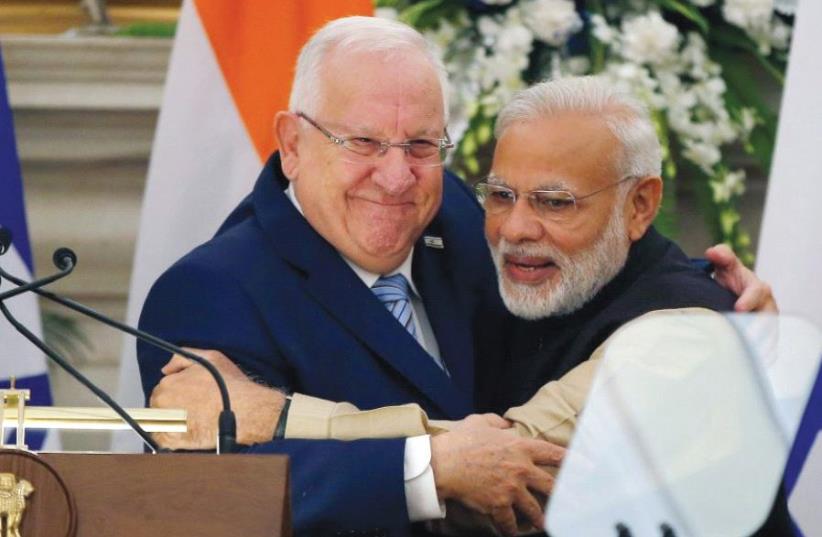 PRESIDENT REUVEN RIVLIN receives a bear hug from Indian Prime Minister Narendra Modi during Rivlin’s visit to India last November
(photo credit: REUTERS)
Advertisement
Tomorrow (Tuesday, August 15) India will mark its’ day of independence, celebrating the end of two centuries of British colonial rule. The Jerusalem Post joins in on the fun and calls of Jai Hind (‘Long live India’) by including five essential things about the unique relations between the ancient land of India and the modern state of Israel. 1.    A passage to India – Ezriel Carlebach, the mythological founder and chief editor of Maariv, the Jerusalem Posts’ very own sister publication, wrote a remarkable book about India. Titled "India – A travel journal” the book was published in 1956 and was based on the three weeks the Israeli journalist spent in India.  Carlebach is considered one of the best publicists ever to publish in Hebrew and the book became an immediate best seller and continues to be in print until this very day, inspiring many Israeli backpackers to book their flight tickets and ‘’dog-out [see below]’’ in the majestic rivers and mountains of India. 2.    Israeli backpackers on the Ganges river – While there had always been Israelis keen on India and Indian culture, the 90’s witnessed a surge in the number of young, post-IDF service Israelis taking an Israeli version of a gap year and heading to India. One result of this "pilgrimage" was a unique Hebrew dialect created by backpackers to reflect the special experience of being down and out and on the road.If an Israeli is ‘disgusting the foxes’ [Magil et Ha-Shoalim] it means he or she hasn’t taken a shower in a while. When an Israeli is trying to save up as much as possible, sleeping on hostel floors and eating the cheapest foodstuffs
on the market, this person is ‘”dogging-out”[mitkalev, living like a dog, kelev]. Not to be confused with the British slang term of dogging which refers to public acts of intimacy. 3.    The Jews of India – As recently covered in TheJerusalem Post, not only are there still Jews in India, they also come to visit Israel as part of Birthright and dance joyfully in the streets of Jerusalem, Bollywood style.However it is worth noting that India does have a rich Jewish legacy. The Cochin Jews from south India have been in the country as far back as the 1600’s, the Bene Israel jews and Baghdadi Jews are two other important pillars of the Jewish history of India.Around 70,000 Indian Jews immigrated to Israel after the state was founded in 1948, not before giving Indian culture such noted people as the actor Ranjit Chowdhry, cricket player Bensiyon Songavkar, and the first Miss India beauty queen Fleur Ezekiel. 4.    Liora Yitzhak – In case you didn’t spend any time in Israel during the last year allow us to introduce to you the noted Israeli singer that brought classical Indian music sensibilities to Israeli pop music scene.Born to a family of Indian Jews Yitzhak was sent to India at the age of 15 to deepen her classical Indian music training. The seven years she spent in subcontinent transformed her to a unique voice in the Israeli musical scene with such hits as ‘A wedding tonight’ and ‘Going Up’.

5.    The destroyer of worlds – Jewish-American physicist J. Robert Oppenheimer described his feelings in Los Alamos after the first atomic test was completed, in 1945 by quoting from the sacred Hindu text the Bhagavad-Gita. He recalled the words of Shiva, “Now I am become Death, the destroyer of worlds."
According to foreign media publications the state of Israel possesses nuclear capabilities. India on the other hand had officially conducted its’ first nuclear test in 1974. Both nations had to fight wars and suffered acts of terrorism and assert their right of self defense and deterrence.The Jerusalem Post wishes our Indian readers a peaceful and joyous independence day.