Shortages of medicine, shelter and drinking water are just a few of the challenges still facing the devastated people of Nepal. 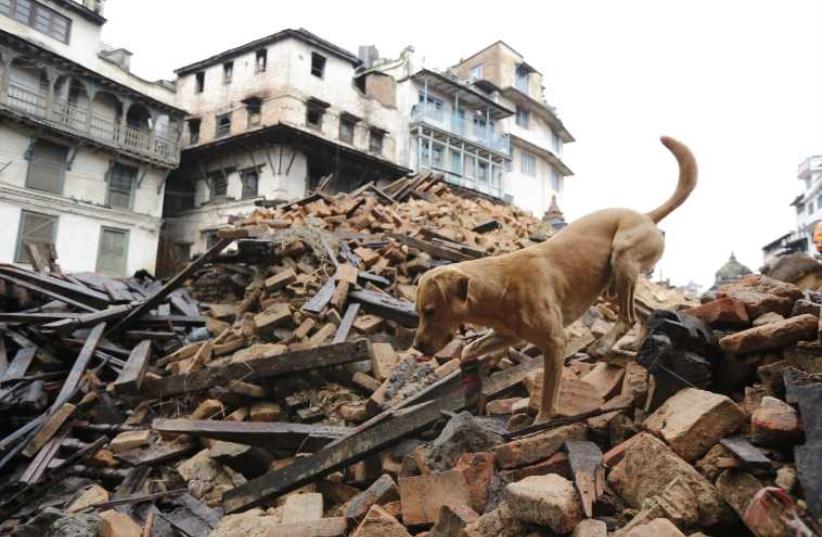 A rescue dog belonging to the German group of ISAR (International Search And Rescue) searches the rubble in downtown Kathmandu, Nepal, April 28, 2015.
(photo credit: REUTERS)
Advertisement
The Foreign Ministry issued a travel warning Tuesday to Nepal in light of a devastating earthquake  that left thousands dead and many more injured.The aftermath of the natural disaster also destroyed numerous villages, communities and homes, leaving scores of survivors without residences or shelter.According to the United Nations, 600,000 houses have been destroyed or damaged. The UN said 8 million of Nepal’s 28 million people were affected, with at least 2 million needing tents and other essential supplies. The worry now is how to prevent the outbreak of disease.Further challenges still lay ahead in the wake of such devastating circumstances, including shortages of medicine and medical services, irregular food supplies and some areas affected by contaminated drinking water.  The Foreign Ministry advises that all these factors should be taken into consideration for those who plan to travel or extend their stay in Nepal. A general advisory also suggested that Israeli nationals refrain from visiting Nepal altogether.Late last month, A powerful earthquake struck Nepal and sent tremors throughout  northern India , killing more than 7,000 people, touching off a deadly avalanche on Mount Everest and toppling a 19th-century tower in the capital Kathmandu.There were reports of devastation in outlying, isolated mountainous areas after the midday quake of magnitude 7.9, Nepal's worst in 81 years, centered 50 miles (80 km) east of the second city, Pokhara.The quake was more destructive for being shallow, toppling buildings, opening gaping cracks in roads and sending people scurrying into the open as aftershocks rattled their damaged homes.Around 300,000 foreign tourists were estimated to be in various parts of Nepal for the spring trekking and climbing season in the Himalayas, and officials were overwhelmed by calls from concerned friends and relatives.