During a three-day killing spree in January 2015, gunmen killed reporters and illustrators at satirical weekly Charlie Hebdo, police officers and shoppers at a Jewish supermarket. 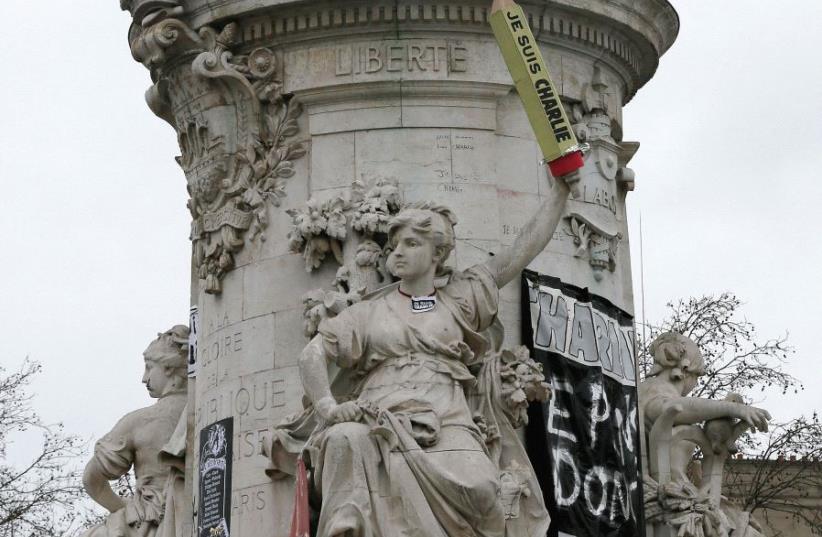 THE STATUE at the Place de la République in Paris is seen featured with a giant cardboard pencil reading ‘I am Charlie’ in 2015 after the attack against the ‘Charlie Hebdo’ magazine
(photo credit: REUTERS)
Advertisement
PARIS - French President Emmanuel Macron led a somber tribute on Sunday to the 17 victims of attacks in Paris three years ago that marked the first of a wave of deadly Islamist assaults in France.During a three-day killing spree in January 2015, gunmen killed reporters and illustrators at satirical weekly Charlie Hebdo, police officers and shoppers at a Jewish supermarket.Sunday's commemoration started at the former premises of Charlie Hebdo, where two brothers armed with assault rifles shot and killed 11, including most of the notoriously irreverent publication's cartoonists and writers.The names of the victims were read out before wreathes were laid in front of the office building, including one by Macron and Paris Mayor Anne Hidalgo.Homage was then paid at the nearby site where a policeman was shot dead at point-blank range by one of the gunmen.A similar tribute was later held at the kosher store where a third gunman killed four people.
Egyptian cleric responds to Charlie Hebdo attack
The Charlie Hebdo attack was carried out by brothers Said and Cherif Kouachi, who died in a police assault two days later.The perpetrator of the attack on the Jewish store, Amedy Coulibaly, also shot dead a policewoman in a separate incident. Coulibaly was also killed by police.