Dieudonné has a long list of convictions for antisemitism, inciting racial hatred and condoning terrorism.

French comedian Dieudonné
(photo credit: REUTERS)
Advertisement
Notorious French comedian Dieudonné, convicted of hate speech and condoning terrorism, will need to make alternative arrangements for his upcoming War tour after the mayors of Marseille and Grenoble barred his performances.The mayor of Marseille, Jean-Claude Gaudin, announced Wednesday that his city will no longer permit Dieudonné to perform at its largest municipality-affiliated venue, the Dome, in November on grounds of public safety. The Marseille mayor reached the decision following pressure from Jewish groups and local media to withdraw permission for the performance.Dieudonné, whose full name is Dieudonné M'bala M'bala, has a long list of convictions for antisemitism, inciting racial hatred, condoning terrorism and tax evasion in both French and Belgian courts. His shows often draw large, animated protests.Dieudonné is also known for his trademark "quenelle" gesture, an inverted Nazi salute which he insists is solely antiestablishment, and his offensive Holocaust-themed jokes."A multicultural city such as Marseille cannot permit a show which is based on divisive and factious humor... and which is likely to lead to public disorder," said Gaudin in a statement. 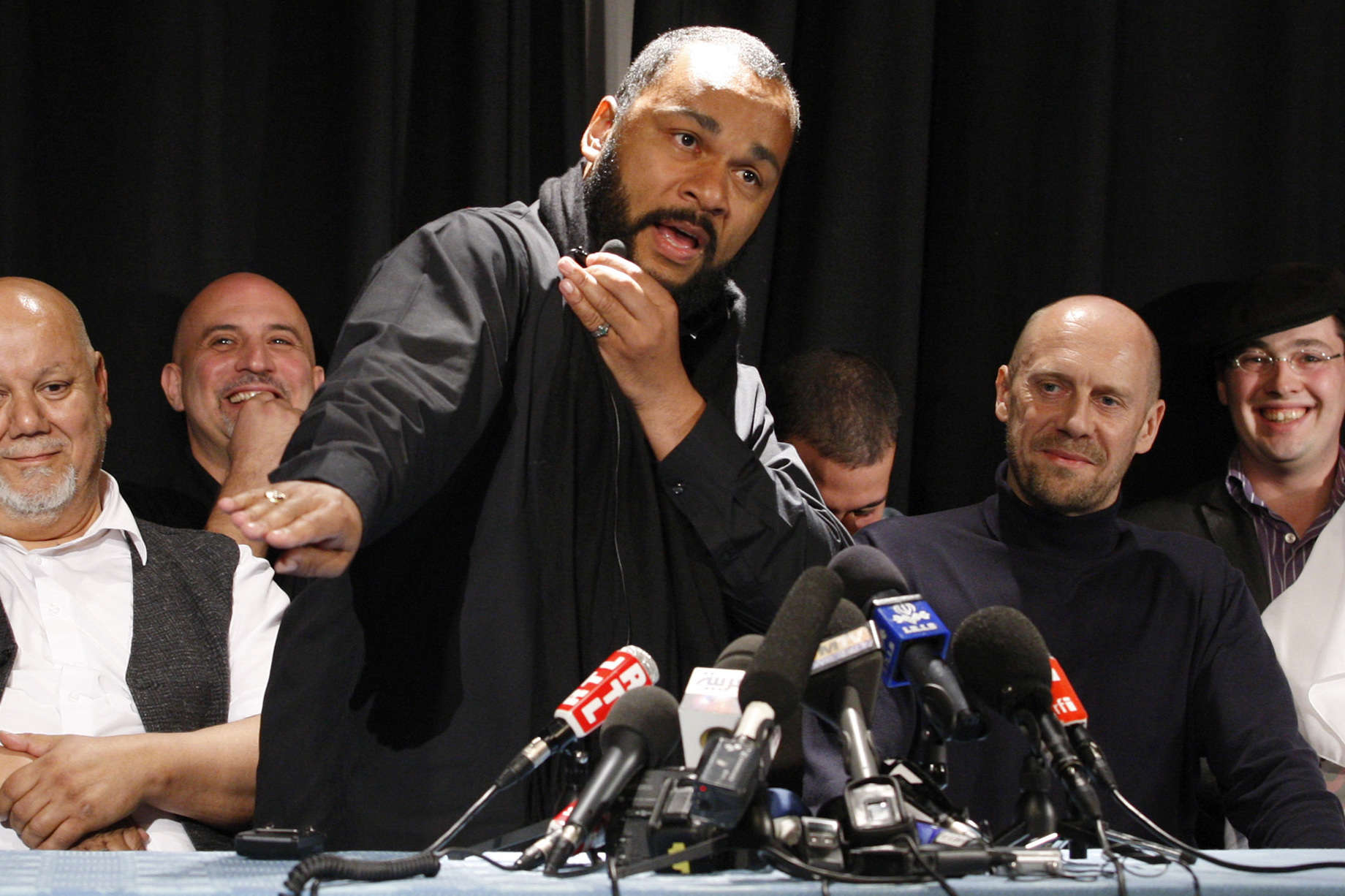 French comedian Dieudonné (C) performs the "quenelle" gesture at a press conference (Reuters)
On Tuesday, the Council of French Jewish Institutions (CRIF), an umbrella organization representing French Jewry, called on the Marseille mayor "to ban the provision of municipal property for a person convicted of racist and antisemitic remarks." The president of Marseille's New Left parliamentary group, Benoit Payan, called on the mayor to "to cancel the unacceptable arrangement" and said that "it deeply hurt to see the town of Marseille inviting a hate preacher."On Sunday, the mayor of Grenoble, Eric Piolle, banned the comedian from performing in his town in October as well to prevent public disorder.Comparing a Dieudonné show to a meeting of France's right-wing National Front Party in the town last year that turned violent, Piolle said he must "guarantee public order."The mayor said he was contacted "by a large number of leading figures and political movements... who all expressed the irreconcilable differences between the values of the artist and the fundamental values of Grenoble, a town open to the world and honored as a Companion of the Liberation of France."In 2009 and 2011, the Grenoble municipality also issued orders banning Dieudonné from performing in the town. On both occasions, however, the decision was overturned by an administrative tribunal.Dieudonné responded to the ban on his official Twitter account Thursday saying: "I will indeed be in Grenoble and Marseille, despite what the media say."In May 2016, Dieudonné was banned from entering Canada after being convicted of breaking hate speech laws. In February 2014, the British government barred the comedian from entering Britain, issuing an "exclusion order" due to his prior convictions. Hong Kong also refused him entry, stating that it was "committed to upholding effective immigration control by denying the entry of undesirables."