Massive manhunt continues for two suspects in shooting that left 12 dead at satirical magazine; one suspect surrenders to police.

By REUTERS
Dramatic amatuer video shows Paris gunmen shooting policeman
Advertisement
France's Prime Minister Manuel Valls said on Thursday that several people have been detained in the hunt for two suspects in the Paris magazine shooting on Wednesday that killed 12 people.
Tribute to the victims of a the Paris magazine shooting (photo credit: REUTERS)
Scene of Paris magazine shooting, January 7, 2015 (photo credit: REUTERS)
French police patrol near the Eiffel Tower as security in Paris is bolstered after a shooting killed 12 (photo credit: REUTERS)
Scene of Paris magazine shooting, January 7, 2015 (photo credit: REUTERS)
Tribute at the Place Royal in Nantes following the shooting at the Paris office of satirical magazine Charlie Hebdo (photo credit: REUTERS)
Paris vigil for victims of the shooting that left 12 dead at office of a satirical magazine (photo credit: REUTERS)
Candelight vigil in tribute to the victims of the shooting at the office of Charlie Hebdo (photo credit: REUTERS)
"We are facing an terrorist threat that is without precedent. It is both exterior and interior. The police and judicial services have dismantled numerous groups. They have confounded -- as you know -- planned attacks. That in itself is proof that we're taking action," Valls said in an an interview with the RTL news outlet.   "Faced with a terrorist threat we have to act and we're acting at the level of the police, the intelligence services and at a judicial level," the French prime minister added.The youngest of three French nationals being sought by police for the suspected Islamist militant attack turned himself into police, an official at the Paris prosecutor's office said.Valls said there are hundreds of people in France who are being followed. "Dozens of people are being followed, dozens of people have been detained. Dozens of people have been imprisoned. But what I say is the demonstration of the difficulty confronting our services: the number of people who represent a danger." "Those individuals (the suspects) were undoubtedly followed. But there is no such thing as a zero risk," he said. The hooded attackers stormed the Paris offices of Charlie Hebdo, a weekly known for lampooning Islam and other religions, in the most deadly militant attack on French soil in decades.French police were still in a huge manhunt for two of the attackers who escaped by car after shooting dead some of France's top cartoonists as well as two police officers.Police issued a document to forces across the region saying the men were being sought for murder in relation to the Charlie Hebdo attack.The document, reviewed by a Reuters correspondent, named them as Said Kouachi, born in 1980, Cherif Kouachi, born in 1982, both from Paris, and Hamyd Mourad, born in 1996.Police published pictures of the two brothers Thursday morning calling for witnesses and describing the two men as "armed and dangerous." 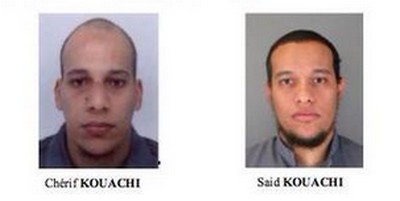 The police source said one of them had been identified by his identity card, which had been left in the getaway car.An official at the Paris prosecutor's office said the youngest of the three had turned himself in at a police station in Charleville-Mézières, some 230 kilometers northeast of Paris near the Belgium border.BFM TV, citing unidentified sources, said the man had decided to go to the police after seeing his name in social media. It said other arrests had taken place in circles linked to the two brothers.The police source said Cherif Kouachi had previously been tried on terrorism charges and served 18 months in prison.He was charged with criminal association related to a terrorist enterprise in 2005. He had been part of an Islamist cell that enlisted French nationals from a mosque in eastern Paris to go to Iraq to fight Americans in Iraq. He was arrested before leaving for Iraq to join militants.The police source said anti-terrorism police searching for the suspects and links to them had carried out searches in Reims, Strasbourg and Paris as part of the investigation.BARBARIC ACTDuring the attack, one of the assailants was captured on video outside the building shouting "Allahu Akbar!" (God is Greatest) as shots rang out. Another walked over to a police officer lying wounded on the street and shot him point-blank with an assault rifle, before the two calmly climbed into a black car and drove off.A police union official said there were fears of further attacks, and described the scene in the offices as carnage, with a further four wounded fighting for their lives.Tens of thousands joined impromptu rallies across France in memory of the victims and support for freedom of expression. The government declared the highest state of alert, tightening security at transport hubs, religious sites, media offices and department stores as the search for the assailants got under way.Some Parisians expressed fears about the effect of the attack on community relations in France, which has Europe's biggest Muslim population."This is bad for everyone - particularly for Muslims despite the fact that Islam is a fine religion. It risks making a bad situation worse," Cecile Electon, an arts worker who described herself as an atheist, told Reuters at a vigil on Paris's Place de la Republique attended by 35,000 people. 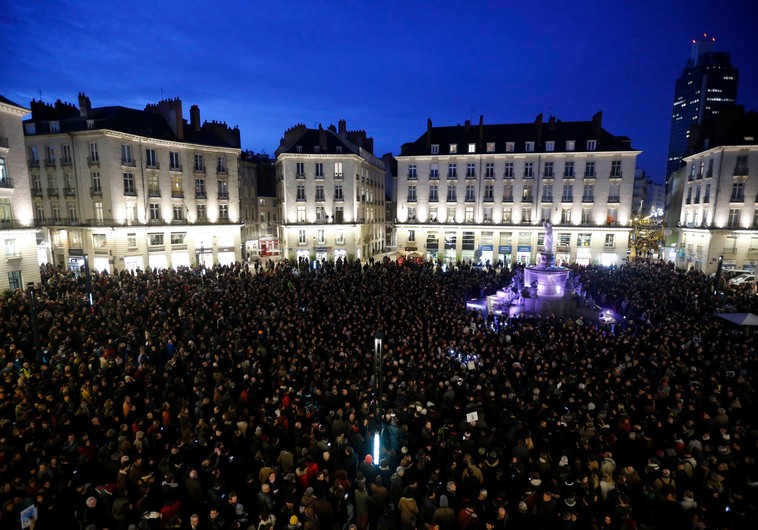