In 2015, 15 terror plots were foiled by the French security services, he said. 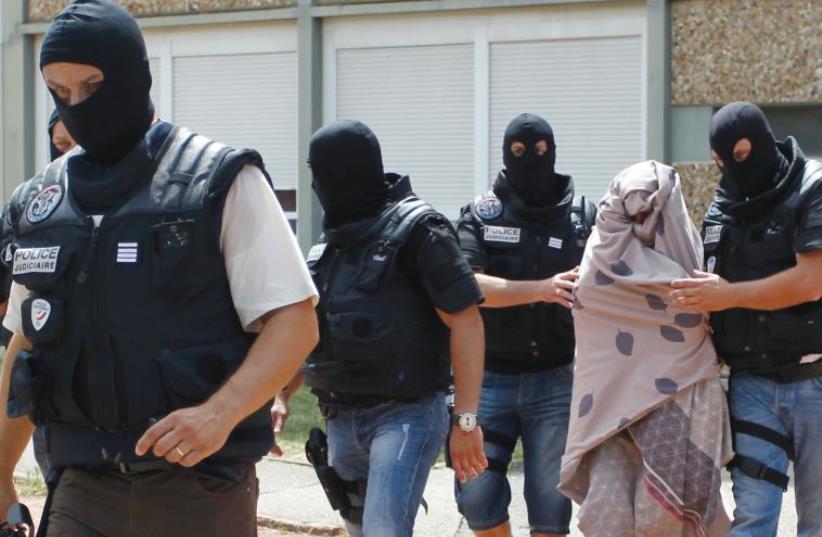 POLICE FORCES escort a woman from a residential building during a raid in Saint-Priest, near Lyon, France, last week in the wake of the terrorist attack where a factory employer was decapitated.
(photo credit: REUTERS)
Advertisement
PARIS - Thousands of house searches since November's Islamist attacks in Paris have helped foil another terrorist plot, French Prime Minister Manuel Valls said on Friday as his government sought to extend emergency rule.Valls, defending state of emergency rules that have allowed police conduct thousands of house searches in just a few months, also said over 2,000 French residents were believed to be involved with jihadi networks based in Syria and Iraq.The Islamic State militant group that controls large parts of Iraq and Syria claimed responsibility for the Nov 13. attack on Paris, in which gunmen and suicide bombers killed 130 people and injured hundreds more."The terrorist threat is here, and here to last," Valls told the National Assembly, where the government is asking lawmakers to extend the state of emergency to the end of May and amend the Constitution so people convicted on terror charges can be stripped of their citizenship.In 2015, 15 terror plots were foiled by the French security services, he said.At least one plot, he said, was foiled as a direct result of house searches police have been able to conduct under state of emergency rule, which allows police to conduct raids without first securing a search warrant from the judiciary.In the three months since the attacks on Paris, police have carried out 3,289 house searches, placed 341 people in custody, put 407 under house arrest and confiscated 560 weapons, 42 of them war-grade, the prime minister said.Half of the 2,000 people involved in some way or other with jihadist networks in Syria and Iraq had left France for that region, and 597 were still there, he said.France is among several countries whose jets are bombing the strongholds of the Islamist State, which has declared a caliphate and vowed to carry out more attacks on France.The ruling Socialists have taken a strong line on law and order against competition from their conservative opponents and the far-right National Front as the country approaches elections next year.The plan to strip dual nationals of their French passport if convicted of terrorism has sparked huge controversy, deeply divided Hollande's Socialist party and threatens to hurt his already faltering chances of winning re-election next year.After many redraftings of the text, it is unclear if the government will manage to muster enough voted from left-wing and right-wing lawmakers to have it adopted.