An exhibit titled "The Art of Leadership: A President's Personal Diplomacy" opens on Saturday at the George W. Bush Presidential Library. 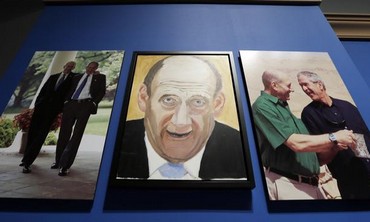 While Ehud Olmert may still be smarting over his conviction last week for accepting a bribe during his tenure as Jerusalem mayor, the former prime minister could take solace in the fact that George W. Bush, the man with whom he shared a close working relationship when he was in the White House, thought enough of the former prime minister to draw a painting of him.Bush on Friday revealed a series of portraits of world leaders, including one of Olmert, he painted in a new pursuit that he said has "opened my mind," even though it left him exposed to joking criticism from his mother.An exhibit titled "The Art of Leadership: A President's Personal Diplomacy" opens on Saturday at the George W. Bush Presidential Library and Museum in Dallas and was shown to reporters on Friday.It features Bush's paintings of some two dozen world figures he worked with during his 2001-2009 presidency, including Russian President Vladimir Putin, Afghan President Hamid Karzai, former British Prime Minister Tony Blair and the Dalai Lama.Accompanying each portrait, are some rarely seen photos of Bush with each leader, including a photo of Bush and former Japanese Prime Minister Junichiro Koizumi strumming guitars during a tour of Graceland in 2006. Koizumi, a fan of Elvis Presley, had requested this visit.
Visit NBCNews.com for breaking news, world news, and news about the economy
"No telling how these people are going to react when they see their portrait," Bush said in a taped interview on NBC with his daughter Jenna Bush Hager, a special correspondent for "Today."A self-portrait and a painting of his father, George H.W. Bush, the 41st president, also are part of the exhibit.
Bush had no interest in painting until leaving the White House and reading Winston Churchill's essay "Painting as a Pastime." His earliest works included quick drawings made for family members with an iPad app."I wanted to make sure the last chapters of my life were full, and painting, it turns out, has helped occupy not only space but opened my mind," Bush said."I paint a lot because, as you know, I'm a driven person and I want to get better. A whole new world has opened up."Bush, 67, said he was reluctant to display his work but hoped the exhibit, which will run through June 4, will create interest in his presidential library.In a video that describes the exhibit, Bush said he intends to paint throughout his lifetime although he admits "the signature is worth more than the paintings."In addition to his world leaders series, Bush's paintings include still lifes, landscapes, paintings of animals and self-portraits set in a bathtub and shower. Some of those early works, including the self-portraits, were leaked on the Internet after Bush's email was hacked.Bush said his favorite painting was the one of his father and said he sometimes was teary while working on it."It was a joyful experience to paint him," he said.Bush's mother, former first lady Barbara Bush, joined the interview live and was asked what she thought of her son's portrait of his father."That's my husband?" she joked upon first glance.She quickly said she liked the painting very much but would absolutely not pose for her son.
Bush said he had learned an important lesson about portraiture - don't paint your wife. Former first lady Laura Bush, in a taped portion of the show, said his portrait of her "still needs some work."