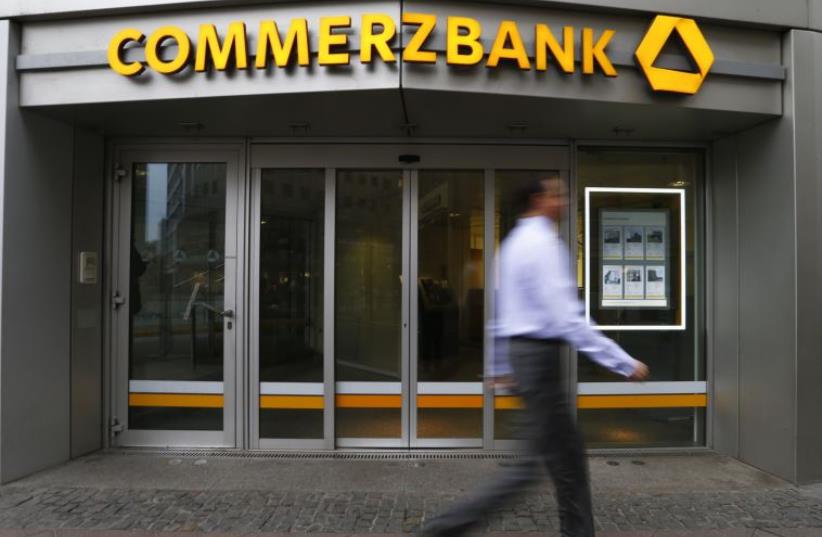 A branch of Commerzbank in Frankfurt
(photo credit: REUTERS)
Advertisement
BERLIN – Commerzbank, Germany’s second largest bank, has closed the account of the al-Quds day demonstration - which organizes annual marches in German cities calling for the destruction of Israel.The bank “closed the account in September because of business conditions,” a spokesman told The Jerusalem Post by telephone on Tuesday.The bank can drop an account “without providing reasons,” he said.After the mass-circulation Berlin daily BZ published a piece by popular columnist Gunnar Schupelius in July titled, “Israel haters collect money through Commerzbank,” Israel’s embassy sent a letter of complaint to the bank.The spokesman said the bank started the process to shut the account after the Schupelius column “drew attention” to the collection of funds for the al-Quds Day campaign.“We are sorry that we did not contact the [embassy]” in response to the letter, the spokesman said, adding that the bank plans to apologize to the legation.International Quds Day – initiated by Ayatollah Ruhollah Khomeini, the Islamic Republic’s founder, in 1979 – calls for the obliteration of the Jewish state.Schupelius, who has previously called for Berlin to outlaw the al-Quds Day marches, wrote that on July 11 he noticed the account information that the al-Quds Day activists advertised on their home page in seeking donations.Yakov Hadas-Handelsman, Israel’s ambassador to Germany, slammed at the time the July 11 al-Quds Day march in the German capital.“It is a disgrace that in Germany a march full of hate, agitation and anti-Semitism can take place,” the envoy said.Schupelius wrote in his column that supporters of the Tehran regime screamed, “Death to Israel, Death to America!” during their march in Berlin. The protesters then switched to Arabic and chanted, “Curse the Jews and victory to Islam!” he said.He blasted Germany’s Economy Minister and  Vice Chancellor Sigmar Gabriel for courting Supreme Leader Ali Khamenei and Iran’s regime as “friends.“ “That can’t be, because they wish us death,” Schupelius wrote.Gabriel visited Iran in July with a large German business delegation.“We are sleepwalkers,” because we underestimate the dangers of Iran’s regime, which seeks an atomic bomb, Schupelius wrote.