The violations occurred between late October 2012 and January 2016, when the Iran nuclear agreement was implemented. 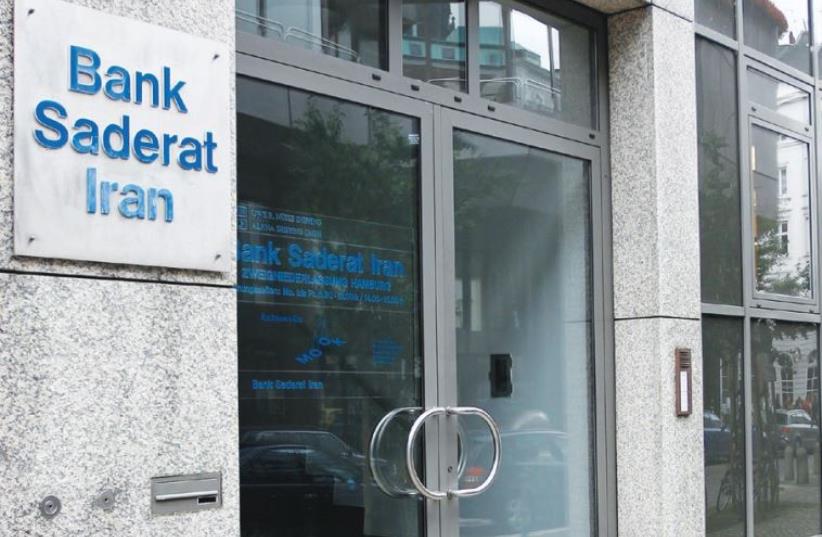 THE ENTRANCE to the Bank Saderat Iran branch in Hamburg is seen in 2010.
(photo credit: CHRISTIAN CHARISIUS/REUTERS)
Advertisement
BERLIN – A German government quality control agency and a private certification agency that works with it both violated EU sanctions and the federal agency’s policy by providing certificates to Iranian banks, constructions companies and energy firms, a joint investigation by The Jerusalem Post and the Federal Republic’s largest daily, Bild, reveals.The quality control certificates make it easier for the Iranian firms to conduct business, because of Germany’s reputation for high industrial standards.The violations occurred between late October 2012 and January 2016, when the Iran nuclear agreement was implemented.After accusations of sanctions violations emerged in 2012, Kurt Lindenblatt, the head of certification for the Bonn-based TÜV InterCert SAAR private agency, wrote, in an email obtained by the Post and Bild: “The list of the companies that are under an embargo was briefly scrolled through... there are several Iranian companies... that possess certificates from us.”TÜV InterCert SAAR issues management systems quality control certifications to companies, as does the German Accreditation Council, the country’s national accreditation body. The Federal Economic Affairs and Energy Ministry oversees the council, which is a government agency.According to a 2013 email from Peter Hissnauer, an Accreditation Council employee, “Apparently TÜV InterCert GmbH Saar did not comply with the [sanctions] requirements and continued to issue certificates. We must assume that the embargo regulations were possibly not observed here and used as a competitive advantage.”Hissnauer also references in his email a policy established on October 25, 2012, in which “DAkkS [the German Accreditation Council] completely discontinued its activity in Iran.” The policy states that all private certification agencies that work with DAkkS are barred from issuing “certificates with the DAkkS indication of accreditation.”German Accreditation Council accreditation logos appeared on the quality control certificates of Iranian companies such as the Bushehr Province Gas Company, Bank Saderat Iran, the ILAM Gas Co., and the Oil Industries Engineering and Construction Co.Scores of Iranian engineering received German Accreditation Council certifications. The companies involved manufacture mechanical seal and spare parts of pumps, industrial batteries, and offshore and onshore pipeline equipment, energy software, and heavy earth-moving drill technology.A German Accreditation Council logo was found on the DANA Kish Drilling company certificate.The use of drill technology is on the radar screen of nuclear weapons experts because Iran has used heavy earth moving equipment to build underground nuclear facilities.Bank Saderat was certified with a German Accreditation Council logo in January 2015. The EU sanctioned Bank Saderat in 2010, accusing it of providing “financial services for entities procuring on behalf of Iran’s nuclear and ballistic missile programs.”In 2006, the US Treasury department sanctioned the bank and blocked its access to US financial markets because “Bank Saderat has been a significant facilitator of Hezbollah’s financial activities and has served as a conduit between the government of Iran and Hezbollah, Hamas, the Popular Front for the Liberation of Palestine-General Command, and Palestinian Islamic Jihad.”During the period of German Accreditation Council accreditations in Iran, between late October 2012 and January 2016, the EU imposed massive financial and energy sanctions on the Islamic Republic in an effort to compel the country’s rulers to stop its nuclear activities.The sensitivity and risks of certifying sanctioned Iranian companies was expressed in the email exchanges secured by the Post and Bild. Lindenblatt cited a passage from an oversight organization, warning his colleagues, “Where there is proven evidence of fraudulent behavior or the CAB [conformity assessment bodies] intentionally provides false information, or the CAB deliberately violates accreditation rules, the CAB shall initiate its process of withdrawals.”Lindenblatt stressed in one email that the head of the TÜV InterCert SAAR, Feridoon Sergizzarea, “decided to continue to issue accredited DAkkS logos to Iranian companies despite the Iran embargo and the policy from October [2012].”Sergizzarea told the Post and Bild, “We had a conversation with Hissnauer during the embargo.Everything was looked at. I assume that everything was permitted.”He said the embargo affected only the military and nuclear sectors. When asked about the Bushehr energy company, he said, “That is a supplier and not affected by the embargo. It is a private firm.”Asked if the Economic Affairs and Energy Ministry was aware of the German Accreditation Council activity in Iran, Sergizzarea said he did not know.Dr. Beate Braams, a spokeswoman for the ministry, said the German Accreditation Council is an “autonomous” organization that can exercise “independent responsibilities.”Oliver Dieser, a spokesman for the council in Berlin, wrote the Post and Bild by email. He said the council “called for all of the [certification] entities it works with to stop issuing accreditations. This, however, does not mean that accreditations were completely banned for customers operating in Iran.”He said compliance with the embargo regulations was “the responsibility of the accredited [certification] agencies alone.”Dieser added that “it is not the responsibility of the German Accreditation Council to examine or approve every accreditation symbol.”Volker Beck, a leading Bundestag deputy from the Green Party and head of the German-Israel Parliamentary Group, told the Post and Bild, “Urgent clarification is required here. The Federal government must explain whether there was a breakdown in sanctions against Iran, with its knowledge or under its responsibility in the period of economics minister [Philipp] Rösler (FDP). In addition, it needs to be explained whether these activities continued under [the current] Economics Minister [Sigmar] Gabriel (SPD).”He asked: “What did the Federal government know about the activities? When was the Bundestag informed of the possible accreditation problems by the German Accreditation Council in connection with the Iran sanctions regime and, if not, why not?” Beck continued, “In the event such activities were not known by the Economics Ministry though the responsible [certification] agencies possibly knew, it raises a fundamental question regarding supervisory control.“Sanctions are an important foreign policy instrument” to react to human rights violations and security threats, he continued.“That applies especially for Iran’s nuclear program, if the words about Israeli security as a German national interest are not to be empty words,” Beck said.