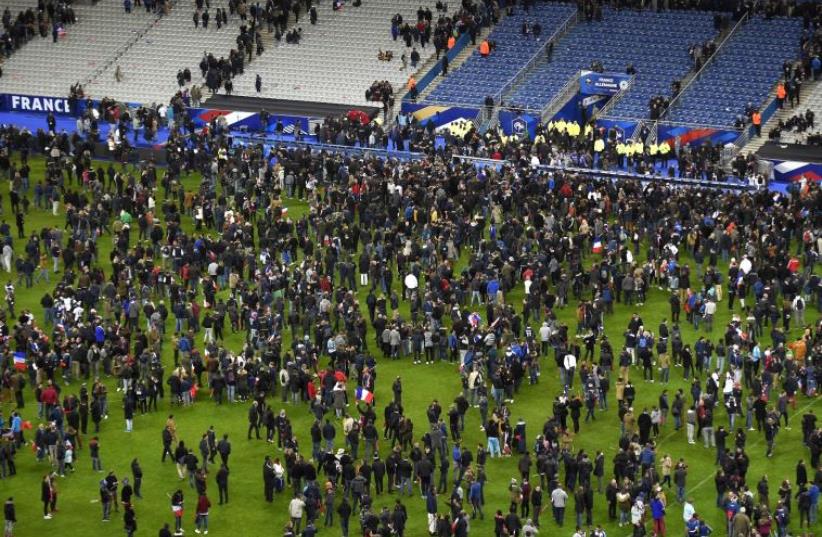 Soccer fans wait for security clearance to leave the Stade de France in Saint-Denis, north of Paris, after the friendly football match France vs Germany on November 13, 2015
(photo credit: PHOTO/FRANCK FIFE)
Advertisement
Germany's spy chief said Saturday that ISIS is planning a large scale attack at the Euro 2016 championship in France, the Daily Mail reported.Hans-Georg Maassen, head of the German Federal Office for the Protection of the Constitution said that while there were no known plans in action, German intelligence admitted they had heard "quite a lot of background noise" which suggested the plot. At least 2.5 million people are due to attend the championship, spread across 10 stadiums. The games are set to begin June 10.Tensions remain high in France, still recovering from the November 2015 attacks in Paris, which included three explosions near the Stade de France national sports stadium.France is preparing in advance for any potential attacks, saying that some games may be played behind closed doors depending on the threat level.In a move to bolster security, France is deploying an unprecedented 90,000 police, soldiers and other security officials, including security from visiting countries competing in the games. Despite the threats, French Interior Minister Bernard Cazeneuve said he was determined to keep plans intact and hold the games as planned."France must remain France and that is why, despite the high level of the terrorist threat which continues to weigh on our country ... the Tour de France will take place and in the same way, that is the reason why the football Euro 2016 will take place. It will take place because nobody, and especially not the terrorists, will prevent us from continuing to live normally," he said.