Sigmar Gabriel, who has condemned his Nazi father, was bombarded by a group of masked neo-Nazi affiliates who accused him of being a "traitor." 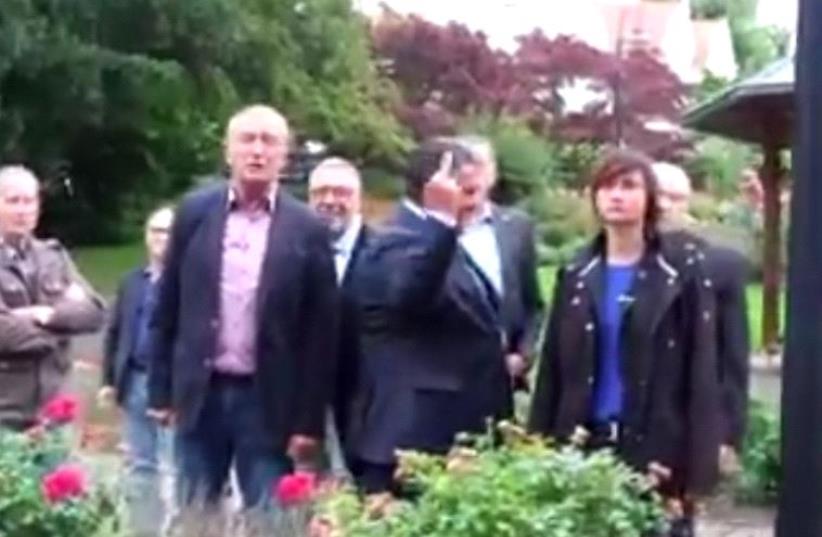 Germany's Vice-Chancellor Sigmar Gabriel gives the middle finger to neo-Nazi protestors
(photo credit: screenshot)
Advertisement
A video depicting German Vice-Chancellor Sigmar Gabriel giving the middle finger to a group of neo-Nazi-linked demonstrators has recently drawn uproarious attention. While visiting northwestern Germany's Lower Saxony region on Friday, a group of masked far-right protesters bombarded the German official while holding banners and shouting slogans accusing him of being a "traitor," AFP reported Wednesday. Gabriel's Social Democrat party reportedly confirmed the authenticity of the footage uploaded to social media by a youth branch of the neo-Nazi National Democratic Party (NPD) group - which Germany has sought to ban. The group allegedly accosted Gabriel during an election campaign event, apparently decrying him for distancing himself from the policies of his Nazi father. "Man, your father loved his country, and what have you done to it? You're destroying it," AFP quoted one protester as saying in reference to Gabriel's father. The German vice-chancellor, who has publicly condemned his father, Walter Gabriel, as a "die-hard Nazi," is considered to represent a center-left political stance. As the far-right protesters called out denunciations of Gabriel, he is seen in the video as responding to the crowd by laughing with mocking disregard before displaying the insulting hand gesture and turning away.