The findings come from examination of cockpit voice recordings and flight data taken from the aircraft's two 'black boxes.' 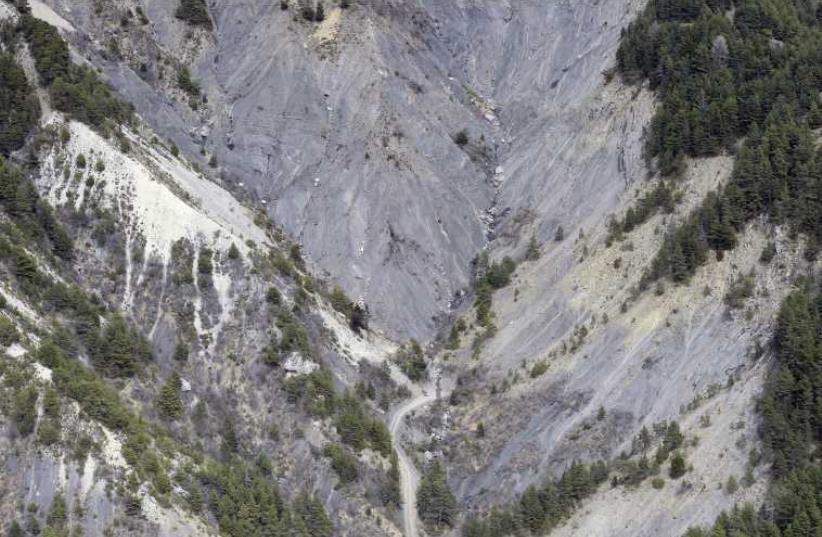 An aerial photo taken from a helicopter shows the crash site of the Germanwings Airbus A320 and its debris on the mountainside near Seyne-les-Alpes
(photo credit: REUTERS)
Advertisement
PARIS - The Germanwings co-pilot suspected of deliberately crashing a jet in the Alps in March practiced entering the fatal descent settings on the previous, outbound flight, investigators said.The changes in autopilot settings, mimicking those which crashed the jet on its way back to Duesseldorf from Barcelona some two hours later, would barely have been noticeable because the jet was already descending, investigators said."I can't speculate on what was happening inside his head; all I can say is that he changed this button to the minimum setting of 100 feet and he did it several times," said Remi Jouty, director of the French BEA accident investigation agency.Shortly after the aircraft had reached cruise height on the return flight on which all 150 aboard died, the captain told Lubitz he was leaving the cockpit and asked him to take over the radio.Just over 30 seconds after the door closed, leaving Lubitz alone in the cockpit, the 27-year-old entered the instruction he had previously rehearsed, ordering the plane to descend to 100 feet on autopilot: easily low enough to crash into the mountains ahead. He then altered another dial to speed the jet up.The findings come from examination of cockpit voice recordings and flight data taken from the aircraft's two 'black boxes.'The BEA, whose investigation runs in parallel to judicial probes, will issue a final report in about a year that may include recommendations on cockpit doors and the handling of pilots' medical records by the airline industry.