Germany is home to an estimated 4 million people of Turkish origin. 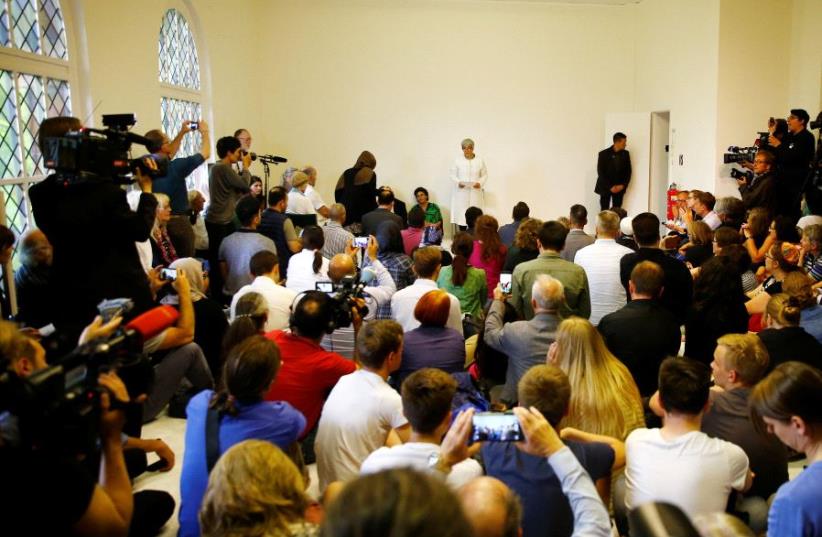 Seyran Ates, founder of the new liberal Ibn-Rushd-Goethe-Mosque, prays in Berlin
(photo credit: HANNIBAL HANSCHKE/REUTERS)
Advertisement
BERLIN/ANKARA - The German government on Friday condemned Turkish criticism of a new liberal mosque in Berlin as interference in freedom of religion and opinion, adding further strain to an already fraught relationship.A number of Turkish media as well as Turkey's main Muslim religious authority, Diyanet, have poured scorn on the Ibn-Rushd-Goethe Mosque, founded by Seyran Ates, a 54-year-old female lawyer and women's rights campaigner of Turkish origin who does not wear a headscarf.The mosque, which uses the premises of a Protestant church, allows men and women to pray side by side instead of being segregated. Ates herself is the imam, in contravention of mainstream Muslim practice, which reserves the position for men.Diyanet said the mosque's practices "do not align with Islam's fundamental resources, principles of worship, methodology or experience of more than 14 centuries, and are experiments aimed at nothing more than depraving and ruining religion."Martin Schaefer, spokesman for the German Foreign Ministry, said Berlin was concerned by the statement."I want to be very clear in rejecting all comments that clearly intend to deprive people in Germany of their right to freely exercise their religion and to limit the right to free expression of opinion," Schaefer said.Germany, which is home to an estimated 4 million or more people of Turkish origin, is already at loggerheads with Turkey on numerous issues.They include the barring of Turkish politicians planning to campaign in Germany for a referendum expanding President Tayyip Erdogan's powers; Turkey's arrest of a German-Turkish journalist working for a German paper; and Turkey's refusal to let German parliamentarians visit an air force base hosting German planes.Schaefer said it was not for the government to determine how people practiced their religion, and that it would protect freedom of worship just as it protected freedom of opinion and press freedom.Turkey's pro-government Sabah newspaper called the mosque's practices "the so-called prayer of the perverse."Diyanet linked the mosque to the network of US-based Muslim cleric Fethullah Gulen, whom Turkey blames for last July's failed coup and refers to as the "Gulenist Terrorist Organization" or "FETO." Ates has denied any connection to Gulen.The Turkish pro-government broadcaster A Haber ran a headline that read: "The ugly face of FETO in Berlin."In a caption to a video story, A Haber also wrote: "The Gulenist Terrorist Organization has caused a scandal in Germany's city of Berlin ... How is it trampling the rules and morals of Islam at the so-called mosque it opened?"Gulen has condemned the coup attempt and denied any link to it.