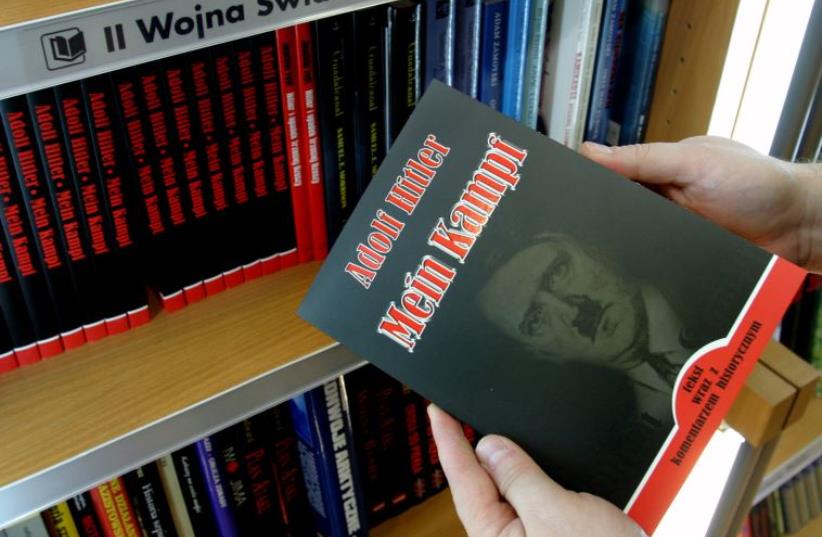 A customer holds a Polish copy of Adolf Hitler's Mein Kampf at a book store in Wroclaw, south western Poland February 23, 2005
(photo credit: REUTERS)
Advertisement
BERLIN - For the first time since Hitler's death, Germany is publishing the Nazi leader's political treatise "Mein Kampf," unleashing a highly charged row over whether the text is an inflammatory racist diatribe or a useful educational tool.The 70-year copyright on the text, written by Hitler between 1924-1926 and banned by the Allies at the end of World War Two, expires at the end of the year, opening the way for a critical edition with explanatory sections and some 3,500 annotations.In January the 2,000 page, two-volume work will go on sale after about three years of labor by scholars at Munich's Institute for Contemporary History.Hitler wrote most of the first, highly autobiographical, volume while incarcerated in Landsberg prison after his failed Munich coup attempt in 1923. After his release, he wrote much of the second volume at his mountain retreat near Berchtesgaden.In the book, a mix of personal experience and political ideology, he outlined his strategy. A bestseller after he became chancellor in 1933, it had by 1945 sold 12 million copies and been translated into 18 languages.The publication is a big step for Germany, which is still struggling with the legacy of the Nazi era and the Holocaust.Polls show deeply divided public opinion. A YouGov survey last month said 51 percent of Germans oppose a continuation of the ban. The state of Bavaria has until now repeatedly used the copyright transferred to it by the Allies to prevent a reprint.Hitler biographer Peter Longerich told Reuters Germans have reached a stage where taboos are being broken."We are probably entering a phase in which you can do more with Hitler and texts about him than you did 10 or 20 years ago. In the age of mass media, taboos are constantly broken and texts cannot be locked away," he told Reuters.Other watersheds include the 2004 film "Downfall" which explored the last days of Hitler's life to this year's hit film "Look Who's Back," an adaptation of a satirical novel about the reappearance of Hitler in modern times and becoming a celebrity.DECONSTRUCT NAZI LIESKeenly aware of the controversy surrounding "Mein Kampf," the Munich institute has stressed that the aim is to deconstruct propaganda and undermine any symbolic power the book still has."The aim ... is to present 'Mein Kampf' as a salient source document for contemporary history, to describe the context of the genesis of Hitler's world view," it said.To prevent any commercial exploitation of the sensitive text, the Institute is self-publishing. The first print run is expected to be up to about 4,000 copies.The Central Council of Jews in Germany has reservations, arguing the text, described by some community leaders as an "anti-Semitic diatribe," should remain banned."After the expiry of the copyright, there is a very big risk that this sorry effort of a work will be more widely available," Council President Josef Schuster said in a statement.Yet Schuster acknowledged that understanding it is important in explaining Nazism and the Holocaust. "So there is nothing to object to if an academic edition with commentary is available for research and teaching," he added.German authorities have made clear anyone reprinting an unedited version will be subject to incitement laws.But Germany's teachers association wants it used in schools."A professional treatment of excerpts in lessons can help immunize against political extremism," association head Josef Kraus told Handelsblatt.