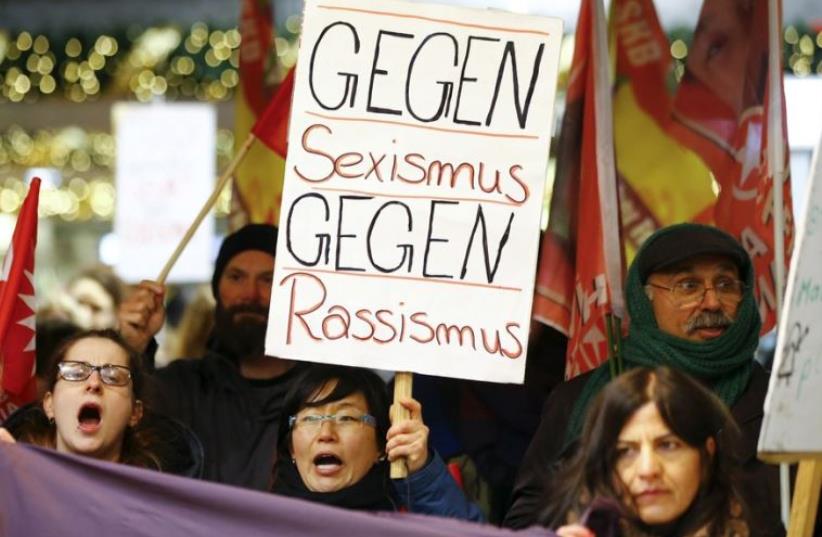 Women shout slogans and hold up a placard that reads "Against Sexism - Against Racism" as they march through the main railway station of Cologne, Germany
(photo credit: REUTERS)
Advertisement
Around 150 mostly female protesters gathered in Cologne on Tuesday night to denounce violence against women.The demonstration came five days after 90 women reported being robbed, threatened or sexually molested at the New Year's celebrations outside Cologne's cathedral by young, mostly drunk men.Police and witnesses have said about 1,000 men, split into groups, attacked women in the square. Some witnesses, including police and victims, said the men were of North African appearance, stirring strong emotions in Germany where Chancellor Angela Merkel has welcomed people fleeing war zones in the Middle East and Africa.One placard in the crowd read in German "Mrs. Merkel: where are you? What do you have to say? We are scared!""What happened here is terrible but at the same, not everybody who was here in this square should be incriminated. That's not acceptable either. The perpetrators must be caught and brought to justice. Measures must be taken and we should show solidarity among each other, men, women, foreigners - against violence," said protester Manuela.Merkel has expressed shock over the attacks that police said occurred when about 1,000 men split into gangs as officers cleared a square to stop fireworks being thrown from the top of steps into the crowd below. While politicians also urged people not to place refugees under blanket suspicion, the incident fueled calls from right-wing groups to stop letting in migrants.Germany took in just over a million last year, far more than any other European country.