The report looks at different types of suicide car bombs and examines how different vehicles might be used during different points of a conflict or in response to changing environments. 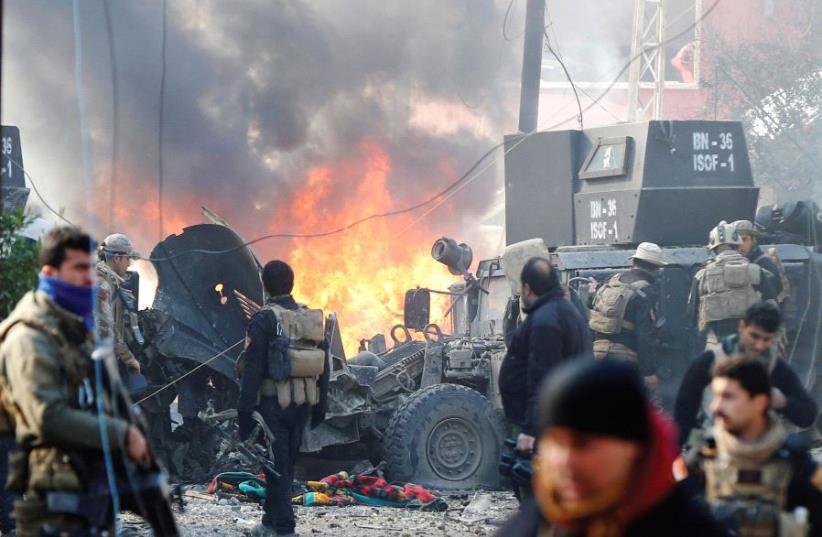 Iraqi Special Operations Forces (ISOF) are seen after a car bomb explodes during an operation to clear the al-Andalus district of Mosul of Islamic State militants, January 17
(photo credit: REUTERS)
Advertisement
Suicide car bombs are causing a spike in civilian deaths, with a rise of 97%, according to a report published last week by the NGO Action on Armed Violence.The 97% statistic comes from a study comparing the number of civilian deaths in 2015 and 2016.Since 2011, when the NGO started to keep worldwide statistics on the issue, the increase of civilian deaths from suicide car bombs rose 148%, with the total number of deaths over the five years at a staggering 211,000.Overall, most of the increase has come from ISIS’s systematic use of suicide car bombs in Syria and Iraq, with them asserting they used 815 bombs in 2016 alone.The report noted that the danger of an increase in the use of suicide car bombs as a tactic “is true not only for the conflict(s) in Syria and Iraq, but can be applied to any conflict where a non-state actor…gains territorial control.”It specified Libya as just one example where terrorists outside of Syria and Iraq gained even some amount of territory and were then able to start using suicide car bombs on a large scale.Groups other than ISIS have started to employ the tactic more often, and it appears to be a method that either Hamas or Hezbollah could and may employ in future conflicts with Israel.The report looks at different types of suicide car bombs and examines how different vehicles might be used during different points of a conflict or in response to changing environments.It reviewed a range of suicide car bomb variations: some are civilian vehicles with hidden payloads designed to be planted covertly, some are fitted with armor to protect the suicide car driver until he reaches the target - sometimes using the armor to “charge” into fortified positions in broad daylight.Suicide vehicles can now even come equipped with secondary weapons such as a gunner or rocket launcher to maximize the chance of hitting a target and inflicting additional damage.Covert suicide car bombs are more likely to be used defensively and armored ones offensively, but they can be used interchangeably at times.Mixing tactics, ISIS has begun disguising armored suicide car bombs as civilian vehicles to better avoid detection, painting fake windows or using interior armor to fool adversaries, said the report.These tactics have been used to fool US coalition aircraft..Whenever the next major Israeli conflict occurs, the IDF may need to be more aware of the systematic use of this tactic.