Greeks defy Europe with overwhelming 'No' to bailout referendum

The country of 11 million people was deeply divided over whether to accept an offer by international creditors that PM Alexis Tsipras calls a "humiliation." 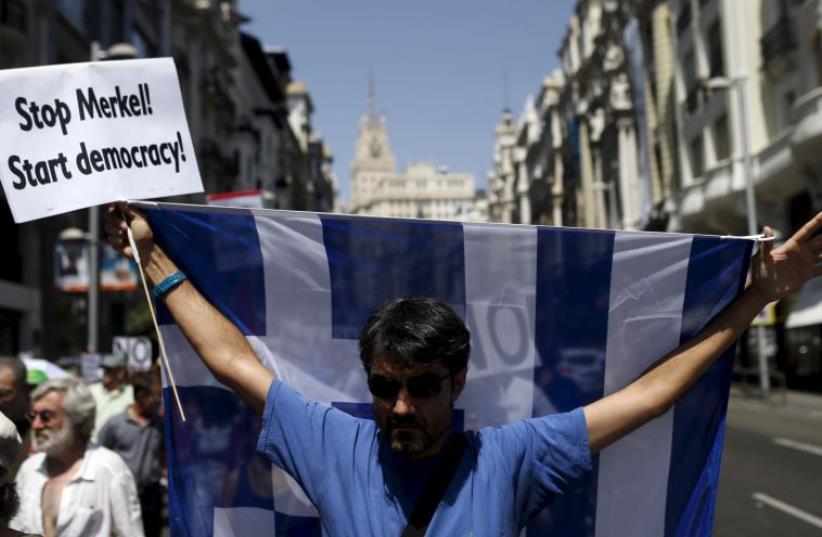 A man holds up a Greek national flag during a demonstration in support of Greece
(photo credit: REUTERS)
Advertisement
ATHENS - Greeks voted overwhelmingly "No" on Sunday in a historic bailout referendum, partial results showed, defying warnings from across Europe that rejecting new austerity terms for fresh financial aid would set their country on a path out of the euro.With nearly a fifth of the votes counted, official figures showed 60.4 percent of Greeks on course to reject a bailout offer from creditors that was the official issue of the ballot. The figures showed the Yes vote drew 40.1 percent. An official projection of the final result is expected at 1800 GMT.Officials from the Greek government, which had argued that a 'No' vote would strengthen its hand to secure a better deal from international creditors after months of wrangling, immediately said they would try to restart talks with European partners.
How will the Greek economy affect Israel?
"The negotiations which will start must be concluded very soon, even within 48 hours," government spokesman Gabriel Sakellaridis told Greek television." We will undertake every effort to seal it soon."Euclid Tsakalotos, the government's chief negotiator said talks could restart as early as Sunday evening.Many of Athens' partners have warned over the past week that a 'No' vote would mean cutting bridges with Europe and driving Greece's crippled financial system into outright bankruptcy, dramatically worsening the country's 5-year-long depression.If confirmed, the result would also deliver a hammer blow to the European Union's grand single currency project. Intended to be permanent and unbreakable when it was created 15 years ago, the euro zone could now be on the point of losing its first member with the risk of further unravelling to come."I believe such a result can be used as a strong negotiating tool so that Europeans can understand that we are not a colony," said Nefeli Dimou, a 23-year-old student in Athens.Greek banks, which have been closed all week and rationing withdrawals from cash machines, are expected to run out of money within days unless the European Central Bank provides an emergency lifeline. Finance Minister Yanis Varoufakis is due to meet top Greek bankers later on Sunday and State Minister Nikos Pappas, one of Prime Minister Alexis Tsipras's closest aides, said it was "absolutely necessary" to restore liquidity to the banking system now that the vote is over.However the European Central Bank, which holds a conference call on Monday morning, may be reluctant to increase emergency lending to Greek banks after voters rejected the spending cuts and economic reforms which creditors consider essential to make Greek public finances viable, central bankers said.In Brussels, EU officials said there would be no comment until the final results are announced.First indications were that any joint European political response may take a couple of days. German Chancellor Angela Merkel and French President Francois Hollande will meet in Paris on Monday afternoon. The European Commission, the EU executive, meets in Strasbourg on Tuesday and will report to the European Parliament on the situation."EU leaders must get together immediately, even on Monday. The situation is too serious to leave to finance ministers," said Axel Schaefer, a deputy head of the Social Democrat (SPD) group in the German parliament."You have to have confidence in the ability of the ECB to act. We must use all the possibilities in the EU budget to help Greece, which is still a member of the euro and the EU."UNCHARTEDA 'No' vote would leave Greece and the euro zone in uncharted waters. Unable to borrow money on capital markets, Greece has one of the world's highest levels of public debt. The International Monetary Fund warned last week that it would need massive debt relief and 50 billion euros in fresh funds.Greek officials see the IMF report as a vital support for their argument that the bailout terms as they stood would merely have driven Greece further into depression.Tsipras called the referendum eight days ago after rejecting the tough terms offered by international creditors as the price for releasing billions of euros in bailout funds.He denounced the bailout terms as "blackmail" and his argument that a 'No' vote would allow the government to get a better deal appears to have convinced many Greeks, particularly among younger voters who have been ravaged by unemployment levels of nearly 50 percent."I have been jobless for nearly four years and was telling myself to be patient," said 43-year-old Eleni Deligainni, who said she voted 'No'. "But we've had enough deprivation and unemployment."Opinion polls over the months have shown a large majority of Greeks want to remain in the euro. But, exhausted and angry after five years of cuts, falling living standards and rising taxes imposed under successive bailout programmes, many appear to have shrugged off the warnings of disaster, trusting that a deal can still be reached.