LD50 in London is accused of using their credibility as an art gallery to promote "a culture of hatred." 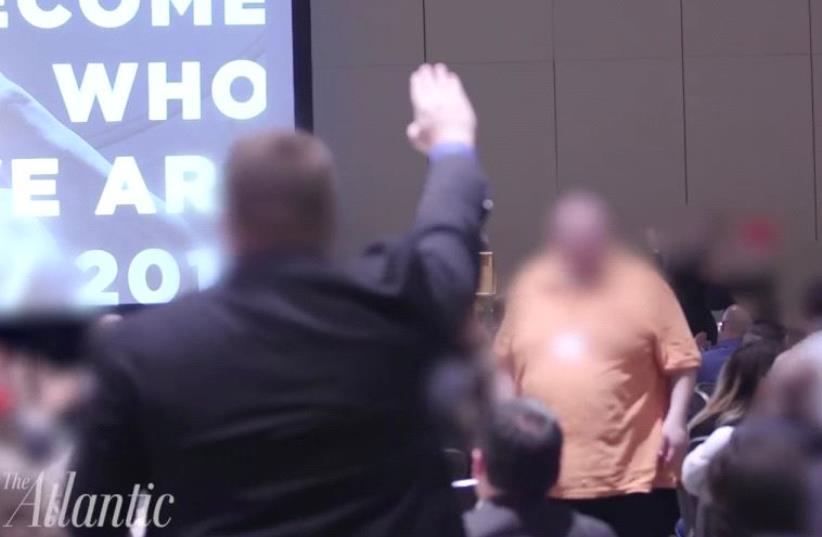 A supporter of the alt-Right giving a Nazi salute.
(photo credit: YOUTUBE SCREENSHOT/THE ATLANTIC)
Advertisement
The art world is in an uproar this week over a controversial London gallery according to reports from British media. The LD50 gallery in Dalston, London has been accused of catering and giving a platform to alt-right and neo-nazi speakers and artworks.The gallery hosted a so-called "neoreaction conference" series throughout the summer of 2016, which featured speakers with connections to far-right movements and publications.Speakers at the conference included Peter Brimelow, the founder of VDARE, which has been listed by the Southern Poverty Law Center as an anti-immigration hate website, and Brett Stevens, who praised the "bravery" of Norwegian far-right terrorist Anders Breivik who killed 77 people in 2011.The gallery also hosted an exhibition of far-right and Nazi imagery alongside the conference series.A group called Shut Down LD50 was formed to counter the gallery's programs. A statement on the Shut Down L50 says, "The gallery is using the cover of the contemporary art scene and academia to legitimize the spread of these materials and the establishment of a culture of hatred... it is imperative that this is not allowed to continue, that the gallery is shut down, and those responsible for it understand that their views are not welcome in our diverse city."Lucia Diego, the gallery owner, responded on the LD50 website by decrying society's "cultural echo chamber"  and the "exceptionally aggressive, militant and hyperbolic reaction" of the protestors.Diego came under fire again this week after a Facebook exchange she had with an artist was made public. In the messages, Diego referred to the Left as "more like a fascist organisation than the real fascists" and said she was unsure if she disagreed with Trump's "Muslim ban."