J'lem teacher, 3 children die in attack; Ashton compares shooting to "what is happening in Gaza."

Eyewitnesses present at Toulouse shooting said the unknown assailant drove up to the Ozar Hatorah school’s entrance on a black scooter around 8:00 a.m. and fired at the people gathered there with a heavy-caliber firearm and a pistol.Rabbi Yonatan Sandler, a 30- year-old French-born teacher from Jerusalem; his two children Aryeh, 6, and Gavriel, 3; and 8-year-old Miriam Monsonego, the daughter of the school’s principal, died in the attack. Several others were wounded. “I saw two people dead in front of the school, an adult and a child... Inside, it was a vision of horror, the bodies of two small children,” a distraught father whose child attends the school told RTL radio.

“I did not find my son; apparently he fled when he saw what happened. How can they attack something as sacred as a school, attack children only sixty centimeters tall!”

There will be a moment of silence throughout France on Tuesday in memory of the Toulouse victims.

Police believe the shooting was the work of a killer who had recently murdered three French soldiers on two separate occasions in the area. They said forensic evidence revealed a gun used at the school was the same used in the previous incidents. 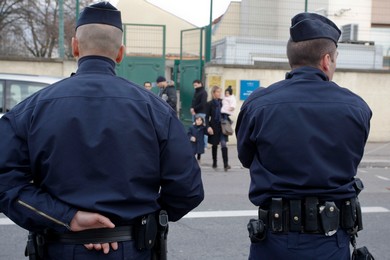 The suspect is believed to be a man of slightly below average height and stocky build who rides a Model T Yamaha motorcycle, wears a black helmet and wields a .45 caliber pistol.

The victims in all three shootings were members of minority groups, but the exact motivation of the killer is still unknown. 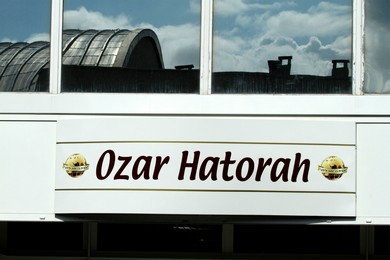 The first murder linked to the gunman took place on March 11. Police found the body of Imad Ibn-Ziaten, a 30- year-old staff sergeant of North African descent, behind a school in Toulouse. Investigators suspect the off-duty serviceman was lured there by his murderer.

Last Thursday, a gunman riding a motorcycle and wearing a black helmet opened fire on three French soldiers in uniform at a shopping mall in Montauban, a city 50 kilometers north of Toulouse. Abel Chennouf, 24, and Muhammad Legouad, 26, both of North African descent, were killed. Loic Liber, 28, of Afro- Caribbean descent, was left in a coma.

During the attack, one eyewitness said the assailant pushed an old lady out of his way before emptying his gun directly into one of the wounded soldiers from close range, Le Figaro reported. Another said the gunman was stocky and short.

On Monday morning, a motorcyclist similar in description to the one involved in the second attack opened fire on the people gathered outside the entrance of the Ozar Hatorah school.

On this occasion, the suspect is said to have also used a .35 heavy-caliber firearm. Experts were quoted as saying that using two guns of different calibers seemed to indicate that the assailant was not a guns expert – otherwise, the gunman would have used two firearms using the same ammunition.

French police have launched a massive manhunt for the suspect while Interior Minister Claude Gueant has ordered increased security at Jewish schools throughout the country.

French paper Le Point reported Monday that police are searching for three former paratroopers, who were dismissed over suspicion of being neo-Nazis in 2008.

French President Nicolas Sarkozy said that Monday’s attack was the work of the same gunman responsible for the killing of the three soldiers last week.

“We know that it is the same person and the same weapon that killed the soldiers, the children and the teacher,” Sarkozy said in a televised address, saying the terrorism alert level in France had been raised.

“This act is odious and cannot remain unpunished.” Sarkozy also said he would suspend his campaign for France’s April-May presidential election until Wednesday.

Sarkozy, who is facing an election later this year, is personally overseeing the investigation in Toulouse. In a press conference, he vowed to find the perpetrator of the attacks.

Meanwhile, his main political opponent François Hollande also traveled to the region to express solidarity with the local residents and the Jewish community.

France is taking immediate action to increase security around Jewish schools, French Ambassador to Israel Christophe Bigot said in an interview on Channel 2.

“There is security around every Jewish school in France,” Bigot said. “We are going to provide more security.”

Such steps, Bigot said, were necessary to protect French citizens and French values.

The entire country is in shock from the “horror” of the incident and mourning the loss of innocent life, Bigot said.

“This is a tragedy for all the French, not only the French Jews,” he said. “There is tremendous solidarity.”

“These kids are our kids, the kids of all French people,” the ambassador continued.

Earlier in the day, Gil Taieb, a vice president of the CRIF, France’s Jewish umbrella group, told The Jerusalem Post that he had no doubt the attack was a hate crime.

“For someone to locate this school in a place like Toulouse means he knew what he was doing,” Taieb said. “He went there to kill Jews.”

Taieb said the community was in a state of shock.

“There are occasional anti- Semitic attacks but they are small, nothing like this,” he said. “We haven’t had something like this in at least 10 years.”

The shooting was the single worst act of violence against Jews in France since 1982, when six people were killed and 22 wounded in a grenade attack on a Jewish restaurant in Paris that was believed to have carried out by a Palestinian group.

The most recent anti-Semitic murder occurred in 2006 when Ilan Halimi was kidnapped and killed by a gang in Paris in a crime that had racist overtones.

Some 500,000 Jews live in France, which has the world’s third-largest Jewish community.

A recent spate of attacks and attempted attacks on Jewish and Israeli targets in India, Thailand, Georgia and Azerbaijan allegedly by Iranian-backed assassins raises suspicions. The attacks are believed to be retaliation for the mysterious killings of nuclear scientists in the Islamic Republic that Tehran has blamed on Israel.

French police were not ruling out anything on Monday. By press time, they had still not apprehended a suspect.

Rabbi Avraham Weill, the chief rabbi of Toulouse, said there was no warning that the community, which numbers about 20,000, might be targeted.

“There was nothing – no phone call, no warning,” he said over the phone from France.

Weill said his top priority was to comfort the families of the victims and prepare the bodies for burial.