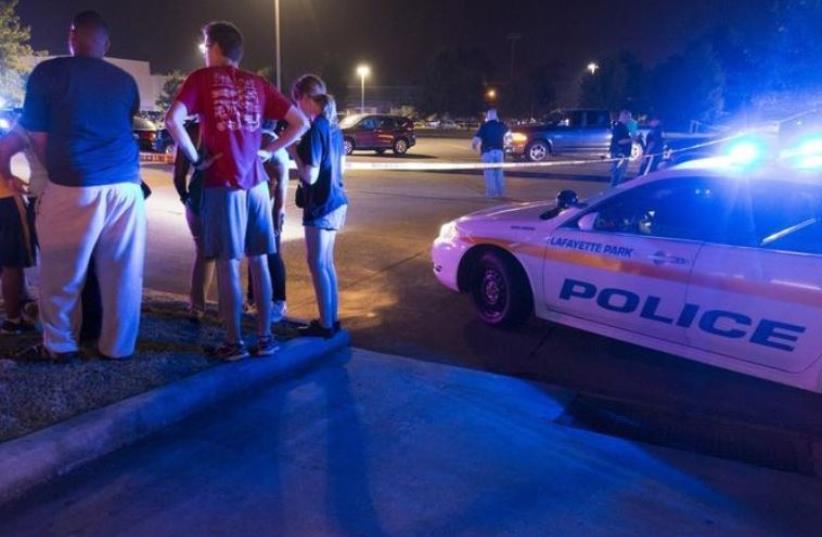 Louisiana theater shooting
(photo credit: REUTERS)
Advertisement
A lone gunman opened fire inside a crowded movie theater in Lafayette, Louisiana, on Thursday evening, killing two people and injuring seven others before taking his own life, police said.The gunfire erupted during a 7 p.m. CDT (0000 GMT) showing of the film "Trainwreck" and took place almost three years to the day after a massacre at a cinema in Aurora, Colorado, that killed 12 people.Lafayette Police Chief Jim Craft said two people died in the hail of bullets before the 58-year-old gunman killed himself with a handgun as officers responded to the scene shortly after 7:30 p.m.Seven people suffered injuries ranging from non life-threatening to critical, Craft said. Authorities said they know the shooter's identity but were not releasing his name during the early stage of the investigation.Authorities searched cars in the parking lot of the theater on a main thoroughfare and dispatched officers to other theaters in Lafayette and descended on the gunman's home.But investigators offered no immediate motive and the gunman's body remained inside the theater several hours later. None of the victims were immediately identified by authorities.Witness Katie Domingue told the local Advertiser newspaper that the gunman stood up in the theater and began shooting about 20 minutes into the movie."He wasn't saying anything. I didn't hear anybody screaming either," Domingue said.Keifer Sanders told CNN that some 100 people were in the theater when the gunman opened fire.Republican Louisiana Governor Bobby Jindal traveled to Lafayette, a city of about 120,000 people roughly 55 miles (90 km) southwest of Baton Rouge."As governor, as a father and as a husband, whenever we hear about these senseless acts of violence it makes us both furious and sad at the same time," he said at a briefing.The shooting came three years after a gunman opened fire at a movie theatre in Aurora, Colorado, during a screening of the Batman film, "The Dark Knight Rises", killing 12 people and wounding 70 others.Former graduate student James Holmes was convicted last week on 165 counts of murder, attempted murder and explosives in the July 20, 2012, rampage.Jurors in that case were trying to determine if Holmes should face the death penalty or life in prison during a penalty phase of that case.The United States has witnessed several mass shootings in the last two months.A gunman is accused of a racially motivated shooting at a black church in South Carolina that killed nine church members in June. More recently, a gunman attacked military offices in Tennessee last week, killing five U.S. servicemen.Jindal said he had ordered National Guard members at offices and other facilities to be armed in the wake of the Tennessee attack.In a BBC interview excerpt that aired on Thursday before the shooting, U.S. President Barack Obama said his biggest frustration was the failure to pass "common-sense gun safety laws" in the United States.