The raid targeted the Radisson Blu hotel, located just west of the city centre in a neighbourhood that is home to government ministries and diplomats. 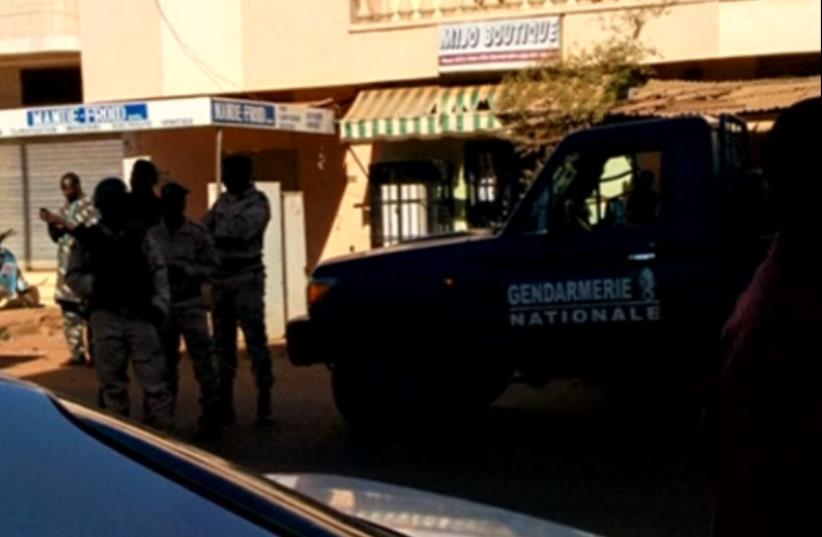 Security forces surround a luxury hotel in Mali's capital Bamako, after Islamist gunmen take 170 people hostage inside
(photo credit: REUTERS)
Advertisement
BAMAKO - Malian special forces stormed a luxury hotel in Bamako on Friday after Islamist gunmen took 170 people including many foreigners hostage in the capital of the former French colony, which has been battling rebels allied to al-Qaida for several years."They've penetrated inside the hotel. The operations are under way," a police source told Reuters.State television said 80 hostages had been freed but the French newspaper Le Monde quoted the Malian security ministry as saying at least three people had been killed in the initial attack. A witness outside the hotel said gunfire could be heard from time to time.A senior security source said the gunmen had burst into Radisson Blu hotel at 7 a.m. (0700 GMT), firing and shouting "Allahu Akbar", or "God is great" in Arabic, and begun working their way through the building, room by room and floor by floor.Some hostages escaped under their own steam while others were freed after showing they could recite verses from the Koran, one security source said.Twelve Air France flight crew were in the hotel, but all were extracted safely, the French national carrier said.A Turkish official said three of six Turkish Airlines staff who had been in the hotel had managed to flee.The Chinese state news agency Xinhua said several Chinese tourists were among those trapped inside the building.Malian President Ibrahim Boubacar Keita cut short a trip to a regional summit in Chad to return to Bamako, his office said. French President Francois Hollande said France would "use all the means available to us on the ground to free the hostages".The raid on the hotel, which lies just west of the city center near government ministries and diplomatic offices, comes a week after Islamic State militants killed 129 people in Paris.The identity of the Bamako gunmen, or the group to which they belong, is not known.ISLAMISTS ACTIVE IN MALINorthern Mali was occupied by Islamist fighters, some with links to al Qaeda, for most of 2012. They were driven out by a French-led military operation, but sporadic violence has continued in Mali's central belt on the southern reaches of the Sahara, and in Bamako.One security source said as many as 10 gunmen had stormed the building, although the company that runs the hotel, Rezidor Group, said it understood that there were only two attackers.The hotel's head of security, Seydou Dembele, said two private security guards had been shot in the legs in the early stages of the assault."We saw two of the attackers. One was wearing a balaclava. The other was black-skinned. They forced the first barrier," Dembele told Reuters.Within minutes of the assault, police and then soldiers had surrounded the hotel and were blocking roads leading into the neighborhood.It is not the first time Bamako has come under attack.An Islamist group claimed responsibility for the death of five people last March in an attack on a restaurant in Bamako that is popular with foreigners.And in August, 17 people were killed during an attack on a hotel in Sevare in central Mali, some 600 km (375 miles) northeast of Bamako, that was claimed by the Sahara-based Islamist militant group al-Mourabitoun.The dead in Sevare included nine civilians, five of whom worked for the U.N. mission in Mali (MINUSMA), as well as four Malian soldiers and four militants.In the wake of last week's Paris attacks, an Islamic State militant in Syria told Reuters the organisation viewed France's military intervention in Mali as another reason to attack France and French interests."This is just the beginning. We also haven't forgotten what happened in Mali," said the non-Syrian fighter, who was contacted online by Reuters."The bitterness from Mali, the arrogance of the French, will not be forgotten at all."France said it was dispatching 50 elite counter-terrorism officers to Bamako imminently.