Guterres calls for Hezbollah’s disarmament ahead of UNSC debate

'I renew my call for Israel to adhere to its obligations under relevant Security Council resolutions and immediately cease its overflights above Lebanese airspace.' 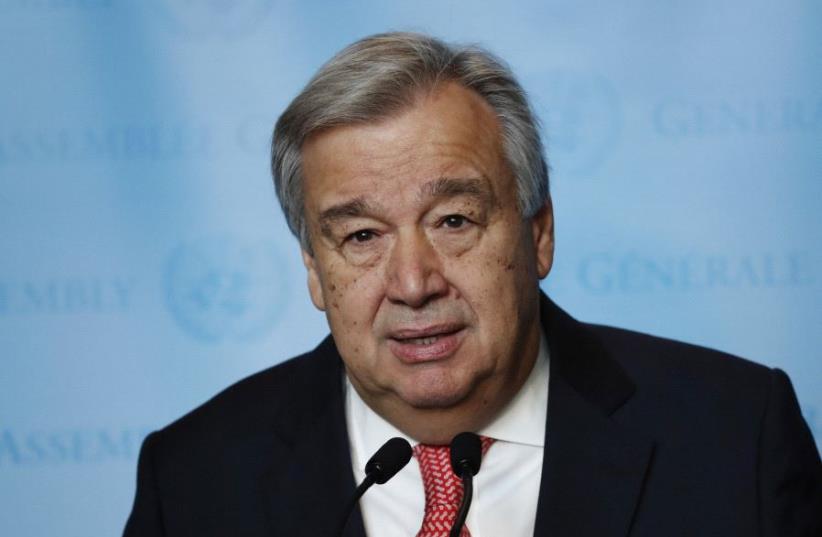 United Nations Secretary-General Antonio Guterres‏
(photo credit: REUTERS)
Advertisement
The Lebanese government and army should ensure the disarmament of Hezbollah, UN Secretary General Antonio Guterres said as he warned of the dangers of the paramilitary group’s involvement in neighboring Syria in advance of Wednesday’s closed-door UN Security Council debate on the matter in New York.“I continue to urge the government and the armed forces of Lebanon to take all measures necessary to prohibit Hezbollah and other armed groups from acquiring weapons and building paramilitary capacity outside the authority of the State,” Guterres wrote.“The continued involvement of Hezbollah in the conflict in the Syrian Arab Republic... carries the risk of entangling Lebanon in regional conflicts and undermining the stability of Lebanon and the region,” Guterres said.He addressed these concerns in a report on activity in Lebanon from October 15, 2019 to April 7 of this year, which he submitted ahead of the discussion on compliance with the 2004 Resolution 1559. That resolution calls for respect for Lebanon’s sovereignty and the dissension and disarmament of “all Lebanese and non-Lebanese militias.”That resolution was never enforced and Guterres described how there were a number of armed groups in Lebanon, of which Hezbollah was the largest. But, he wrote, “no progress was made during the reporting period with regard to dismantling the military bases of the Popular Front for the Liberation of Palestine-General Command and Fatah al-Intifada in the country.”In his report, dated April 30, Guterres said, Hezbollah’s self-acknowledged maintenance of arms and “the alleged increase by Hezbollah of its arsenal pose a serious challenge to the State’s ability to exercise full sovereignty and authority over its territory.” Hezbollah’s “renewed admission that it possesses missiles is also of great concern,” Guterres said.He also took issue with Israeli violations of the resolution, such as the flyovers. “Unscrewed aerial vehicles and fixed-wing aircraft, including fighter jets, of the Israel Defense Forces, continued to make near daily overflights above Lebanon during the reporting period,” Guterres said.“The alleged use of Lebanese airspace by the Israel Defense Forces to strike targets in the Syrian Arab Republic is deeply concerning. I renew my call for Israel to adhere to its obligations under relevant Security Council resolutions and immediately cease its overflights above Lebanese airspace,” Guterres said.In a statement that appeared aimed at both Israel and Hezbollah, Guterres said that “violations, by air and ground, run the risk of triggering an escalation and could jeopardize stability in Lebanon, Israel and beyond. They undermine the credibility of the Lebanese security and State institutions and generate anxiety among the civilian population.”Wednesday’s UNSC debate comes just one week after the UNSC discussed the implementation of Resolution 1701 adopted in 2006, which ended the second Lebanon War and the role of the United Nations Interim Force in Lebanon in monitoring that resolution. UNIFIL’s mandate is renewed annually in August.After the meeting, Ambassador to the UN Danny Danon said that “if Hezbollah continues to paralyze UNIFIL operations and intensify its terrorism operations in the region, there will be no choice but to begin making decisions on the purpose of the UN organization in its present form.”US Ambassador to the UN Kelly Craft similarly expressed her frustration at the limited role UNIFIL plays.Craft charged that Hezbollah “openly flaunts its weaponry; flagrantly disregards Resolution 1701; and, for all intents and purposes, dictates to UNIFIL where and when it can patrol.” In addition, Craft accused the Lebanese government of preventing UNIFIL from accessing and investigating Hezbollah terror tunnel sites located within UNIFIL’s area of operations.“Now, we see UNIFIL barred from the places it used to patrol and prevented from inspecting sites clearly used for military activity,” Craft said.From November 1 to February 18, UNIFIL was prevented 13 times, sometimes violently, from carrying out its mandate, Craft said.
Despite UNIFIL, Hezbollah armed itself, stockpiled munitions, dug tunnels for terrorist fighters, built factories to upgrade its rockets and used women and children as shields in assaults on UNIFIL peacekeepers, Craft said.In a March 10 report for that meeting, Guterres listed violations of 1701 from both sides the border and expressed his concern about the lack of access granted to UNIFIL.According to his report, UNIFIL has 10,368 military personnel and conducted 14,457 monthly military operational activities, including 6,774 patrols, during the reporting period.Guterres said that UNIFIL recorded “313 ground violations of the Blue Line by unarmed Lebanese civilians crossing south of the Blue Line, including 209 violations by shepherds and farmers.”Separately, he said that “UNIFIL recorded 291 air violations” by Israel, “for a total overflight time of 890 hours.” He said that 79% of that air-traffic was from aerial vehicles and the remainder was from “fighter aircraft or unidentified aircraft.”After last week’s meeting, Estonian Ambassador Sven Jürgenson, who holds the rotating monthly presidency of the UNSC for May, said, that UNSC members had “stressed the importance of UNIFIL being able to fulfill its mandate.” He added that members were concerned by violations of Resolution 1701 including “land and air.”UNSC members “recalled that all parties should make every effort to ensure that the cessation of hostilities is sustained.”