Hollande: Brexit is a tough challenge for the European Union

The EU for its part will be economically and politically damaged, facing the departure not only of its most free-market proponent but also a member with a UN Security Council veto and powerful army. 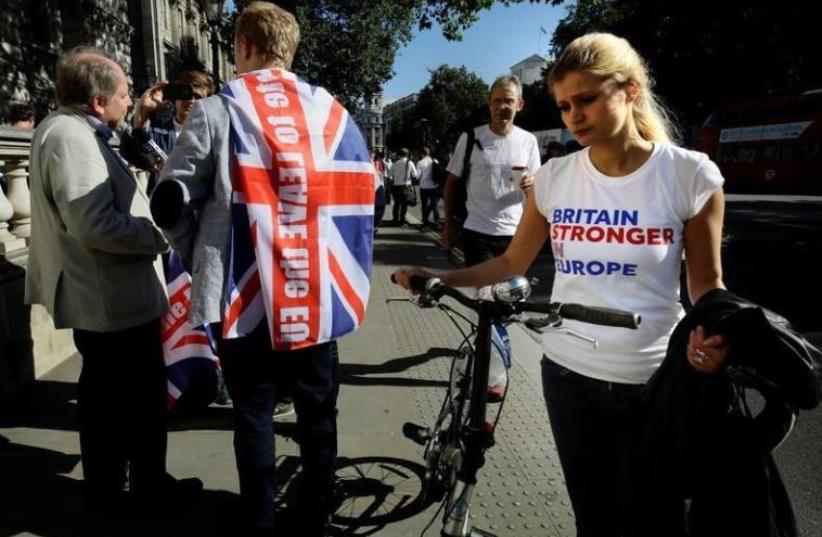 A vote remain supporter walks past a vote leave supporter outside Downing Street after Britain voted to leave the European Union.
(photo credit: REUTERS)
Advertisement
Britain's decision to leave the European Union is a serious challenge, French President Francois Hollande said on Friday adding that adding that he would take initiatives to jolt the bloc back on track.The vote raised global concern for the future of the European Union, with many fearing that other countries would follow Great Britain’s lead.Hollande said the EU must focus on key priorities like security and defense, border protection and job creation as well as reinforcing the euro zone, while leaving member states to handle what falls to them.The leader of the euro zone's second-largest economy said negotiations over Britain's exit must be swift. He said he regretted but respected the British referendum's outcome."The British vote is a tough test for Europe," Hollande said in a televised address, adding that he would travel to Berlin on Monday to meet German Chancellor Angela Merkel and possibly Italian Prime Minister Matteo Renzi.Hollande will also meet with the leaders of France's main political parties.Hollande's prime minister, Manuel Valls, said it was time to reinvent Europe or risk the bloc's fragmentation. Valls said the vote revealed a malaise within Europe that had been ignored for too long.Quitting the EU could cost Britain access to the EU's trade barrier-free single market and mean it must seek new trade accords with countries around the world.The EU for its part will be economically and politically damaged, facing the departure not only of its most free-market proponent but also a member with a UN Security Council veto and powerful army.German Chancellor Angela Merkel said on Friday, "With deep regret we today have to recognize the decision of the majority of the British people," she said. "Today is a watershed for Europe, it is a watershed for the European unification process."Merkel said Germany had a particular interest and responsibility in European unity succeeding.It is important that all the other 27 EU member states analyzed the situation together in a calm and sober manner and did not rush into any decisions, Merkel said.United Nations Secretary-General Ban Ki-moon expects Britain to continue its leadership at the world body particularly on development issues after the country, a Security Council veto power, voted to leave the European Union."At the U.N., we look forward to continuing our work with the United Kingdom and the European Union, both important partners," Ban's spokesman Stephane Dujarric said in a statement on Friday. "When we work together, we are stronger."He said that as Britain and the European Union begin to negotiate a departure, Ban "trusts in Europe's well-proven history of pragmatism and common responsibility in the interest of European citizens.”Jerusalem Post Staff contributed to this report.