In Bangkok, dazed and covered in soot and dust

The blast went off right at the spot where tourists, including Israelis at times, congregate daily and where female vendors sell flower garlands, joss sticks and votive offerings for the spirits. 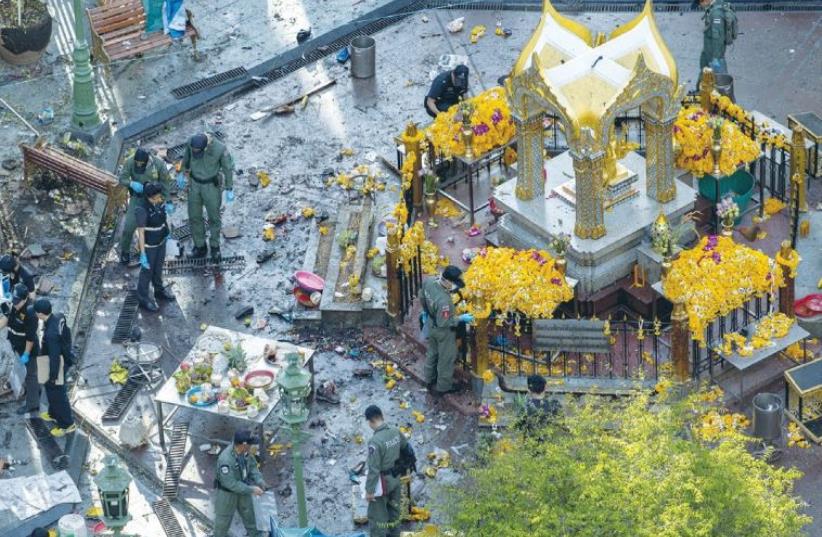 EXPERTS EXAMINE the scene of the explosion at the Erawan Shrine in Bangkok yesterday.
(photo credit: REUTERS)
Advertisement
BANGKOK – There was a muffled boom, its impact deadened by distance and the buzzing clamor of a vibrant city during evening rush hour. I didn’t think much of it.I was on my way home, legging it down a road at around 7 p.m. on Monday, near the perennially gridlocked Ratchaprasong intersection in the teeming commercial heart of Bangkok, Thailand’s capital.
Bangkok Jewish community on high alert, but still maintaining a brave face
Surrounded by luxury malls and five-star hotels, Ratchaprasong is famous for the Erawan Shrine, a small gated enclosure with its golden statue of a Hindu deity, which is widely revered by Thais and draws throngs of worshipers and tourists daily.The traffic, sluggish at the best of times, suddenly froze up along a road leading to the intersection. There were signs of pandemonium up ahead.A car crash, I reckoned. Soon enough, however, it became apparent that something more serious was afoot. The sirens of ambulances, police cars and fire trucks kept blaring; the walkie-talkies of shopping mall security guards were abuzz with abrupt commands; people were hurrying away from the area.There at the intersection, 50 or so meters from the shrine and behind a quickly improvised police cordon, a crowd had gathered. In the middle of a road, three motorcycles had been ablaze. The fires had promptly been put out, leaving the mangled remains of torched chassis and disembodied wheels. Debris, body parts and congealed blood lay everywhere.Police officers, security guards, mototaxi drivers, bystanders and medics were tending to the wounded, Thais and foreign tourists alike. Several bodies around the shrine lay under white sheets.A side of the shrine’s wroughtiron fence, which stands right by a busy pedestrian crossing, was heavily damaged. A sturdy concrete column of it had buckled under the force of the explosion, which had spewed a deadly spray of debris in a large radius. A bomb disposal unit was inspecting the site for any other explosives.The blast went off right at the spot where tourists, including Israelis at times, congregate daily and where female vendors, stationed at their curbside stalls on a narrow sidewalk, sell flower garlands, joss sticks and votive offerings for the spirits. A few meters away, inside the shrine’s compound, young Thai women in traditional costumes routinely perform traditional dances in honor of the shrine’s Hindu deity all evening long.Now, dazed and covered in soot and dust, a few Thais stood or sat near a median strip. They resembled extras from an apocalyptic horror film. Several people were clearly in shock.A few women were sobbing quietly. A policeman picked up a shoe with what appeared to be a foot in it. He placed it in a plastic bag. Another was inspecting a motorcycle helmet found on the road.“Two motorbikes crashed and exploded,” offered a Thai man, who said he works in the area and now stood in the crowd of bystanders. He was wrong. As CCTV footage later showed, according to Thai police, it had been a powerful homemade bomb, placed in a backpack and left by the fence of the shrine, which caused the blast.At least 20 people, several of whom were Malaysian, Singaporean and Hong Kong tourists, were killed and dozens of others were wounded in this deadliest bomb attack in Bangkok’s history. Several nearby motorbikes on the road, some reportedly with riders on them, got caught up in the blast. So did pedestrians, worshipers and local Thais who made a living, one way or another, at the shrine.Standing across the road from the site of the blast is a visibly shaken young Thai man. He says he was praying at the shrine, whose idol is presumed to protect Bangkok and its denizens, just moments before the explosion. Through sheer chance, he was already at a safe distance out on the street when the bomb went off. Alarmed, he ran into a nearby hotel’s lobby.“This is terrible,” he says in halting English. “The people who were there with me [at the shrine], I don’t know what happened to them. I think they are all dead.”