IN PICTURES: Hundreds of thousands march for unified Spain

Protesters on Sunday turned out in the largest display of support for a united Spain since the beginning of the crisis in Catalonia.

By REUTERS
OCTOBER 29, 2017 16:33
Pro-unity supporters take part in a demonstration in central Barcelona, Spain
(photo credit: JON NAZCA/ REUTERS)
Advertisement
BARCELONA - Hundreds of thousands of supporters of a unified Spain filled Barcelona's streets on Sunday in one of the biggest shows of force yet by the so-called silent majority that has watched as regional political leaders push for Catalan independence. 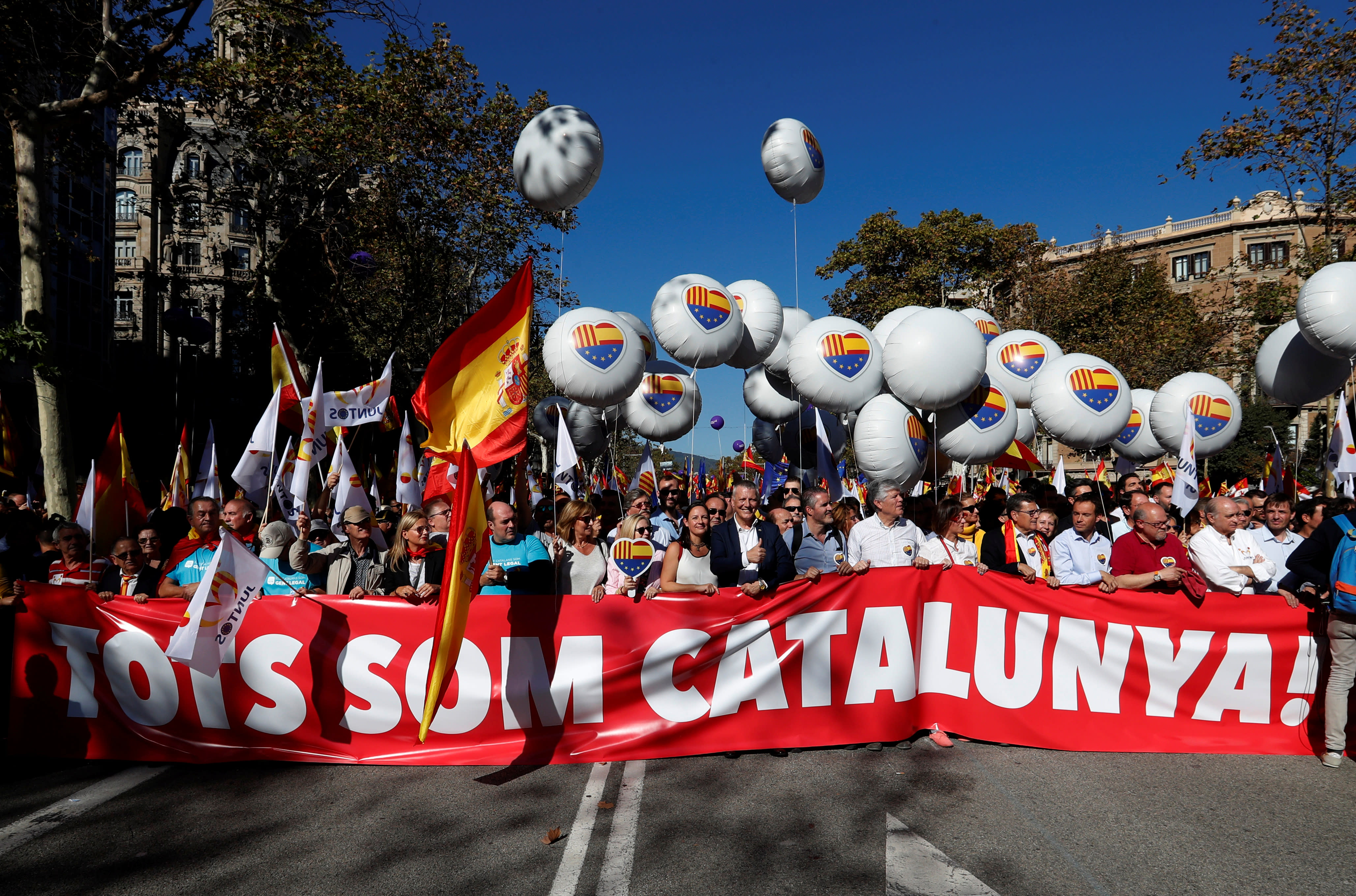 Pro-unity supporters take part in a demonstration in central Barcelona, Spain (Yves Herman / Reuters)Political parties opposing a split by Catalonia from Spain had a small lead in an opinion poll published on Sunday, the first since Madrid called a regional election to try to resolve the country's worst political crisis in four decades.Polls and recent elections have shown that about half the electorate in the wealthy northeastern region, which is already autonomous, oppose secession from Spain, but a vocal independence movement has brought the current crisis to a head. 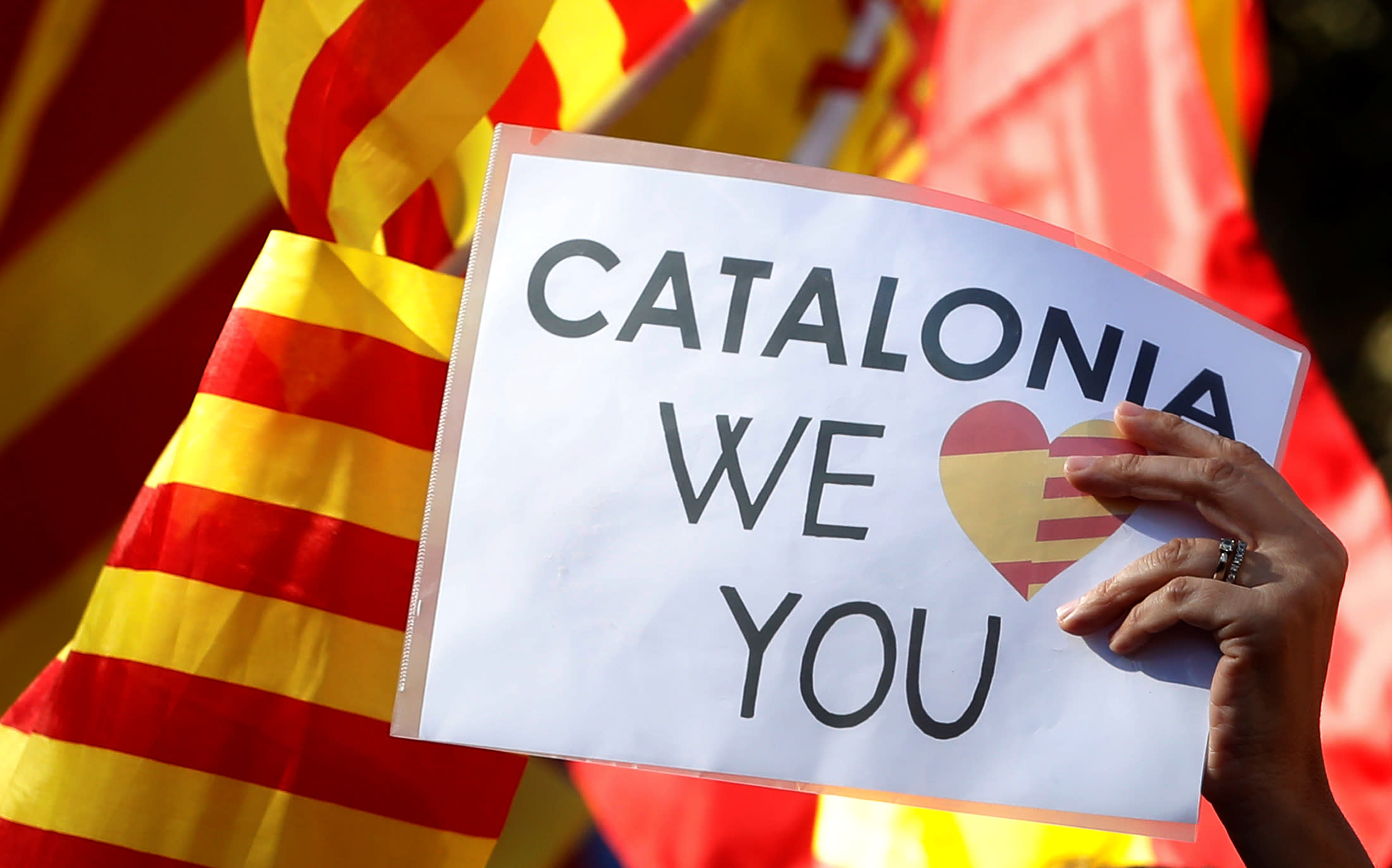 Pro-unity supporters take part in a demonstration in central Barcelona, Spain (Yves Herman / Reuters)Spain's central government called an election for December 21 on Friday after sacking Catalonia's president Carles Puigdemont, dissolving its parliament and dismissing its government. That followed the assembly's unilateral declaration of independence in a vote boycotted by three national parties.The regional government claimed it had a mandate to push ahead with independence following an unofficial referendum on October 1 which was ruled illegal under Spanish law and mostly boycotted by unionists.Waving thousands of Spanish flags and singing "Viva España," protesters on Sunday turned out in the largest display of support for a united Spain since the beginning of the crisis -- underlining the depth of division in Catalonia itself."I'm here to defend Spanish unity and the law," said Alfonso Machado, 55, a salesman standing with a little girl with Spanish flags in her hair. 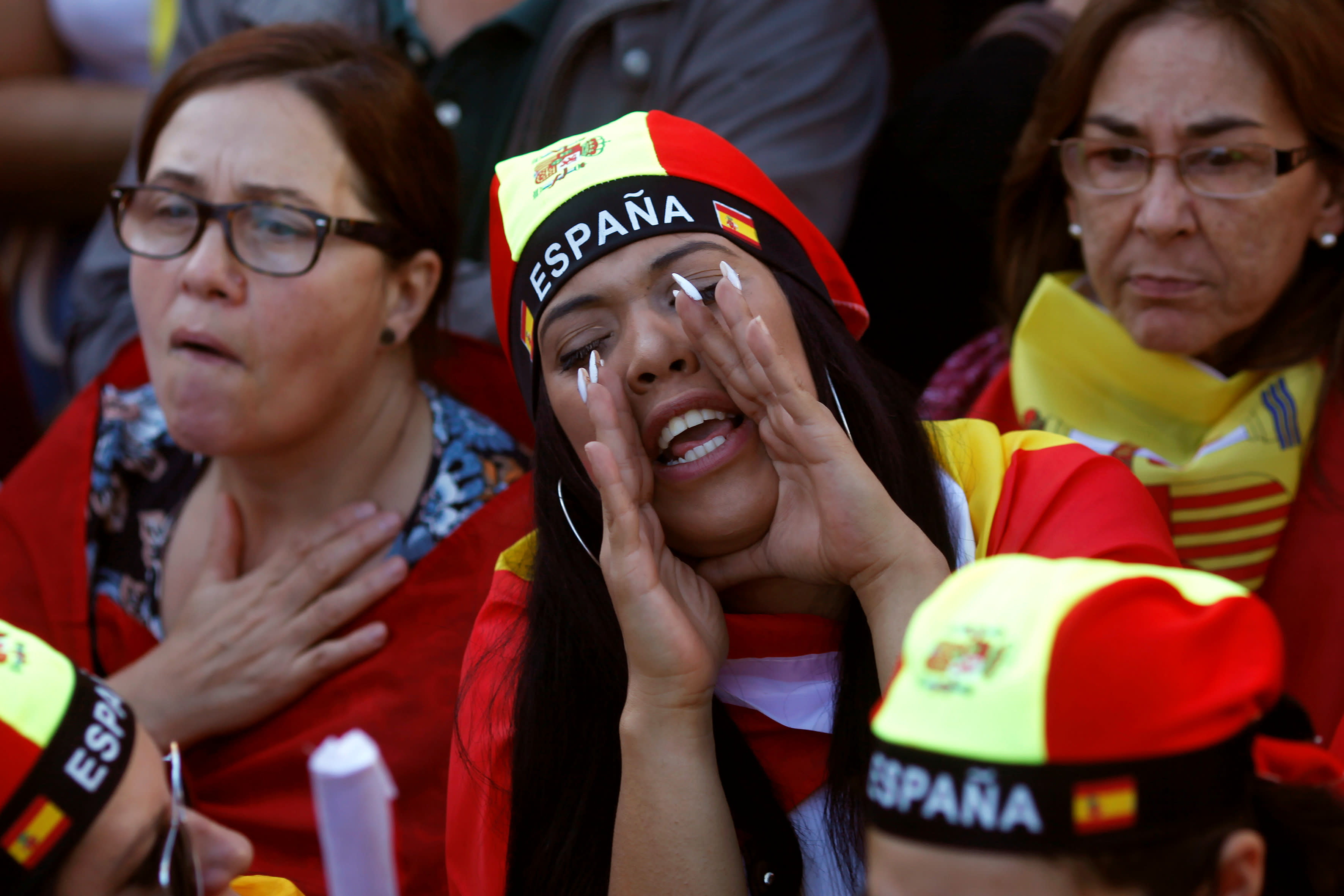 Pro-unity supporters take part in a demonstration in central Barcelona, Spain (Jon Nazca / Reuters)"Knowing that in the end there won't be independence, I feel sorry for all the people tricked into thinking there could be and the divisions they've driven through Catalan society."SLIGHT UNIONIST LEADThe poll of 1,000 people by Sigma Dos for newspaper El Mundo, which opposes independence, showed anti-independence parties winning 43.4 percent support and pro-independence parties 42.5 percent.The survey was taken from Monday to Thursday, just as the central government prepared to take control of Catalonia.Madrid said on Saturday that secessionist politicians, including Puigdemont, were free to take part in the December 21 election. The hardline CUP has been unclear if it would.With weeks still to go before that date, the poll showed the CUP, kingmaker for the pro-secessionists in the dismissed 135-seat parliament, would win seven seats, down from a current 10.The pro-independence coalition Junts pel Si, which held 62 seats previously, was split into parties PDeCat and ERC for the poll as they are unlikely to run on a single platform. The two parties would win between 54 and 58 seats in total, the poll showed.In a speech at Sunday's unity rally, former European Parliament president Josep Borrell called for voters to turn out en masse in December to ensure independence supporters lose their stranglehold on the regional parliament."Maybe we're here because many of us during elections didn't go and vote. Now we have a golden opportunity. This time, nobody should stay at home," Borrell said to cheering crowds. 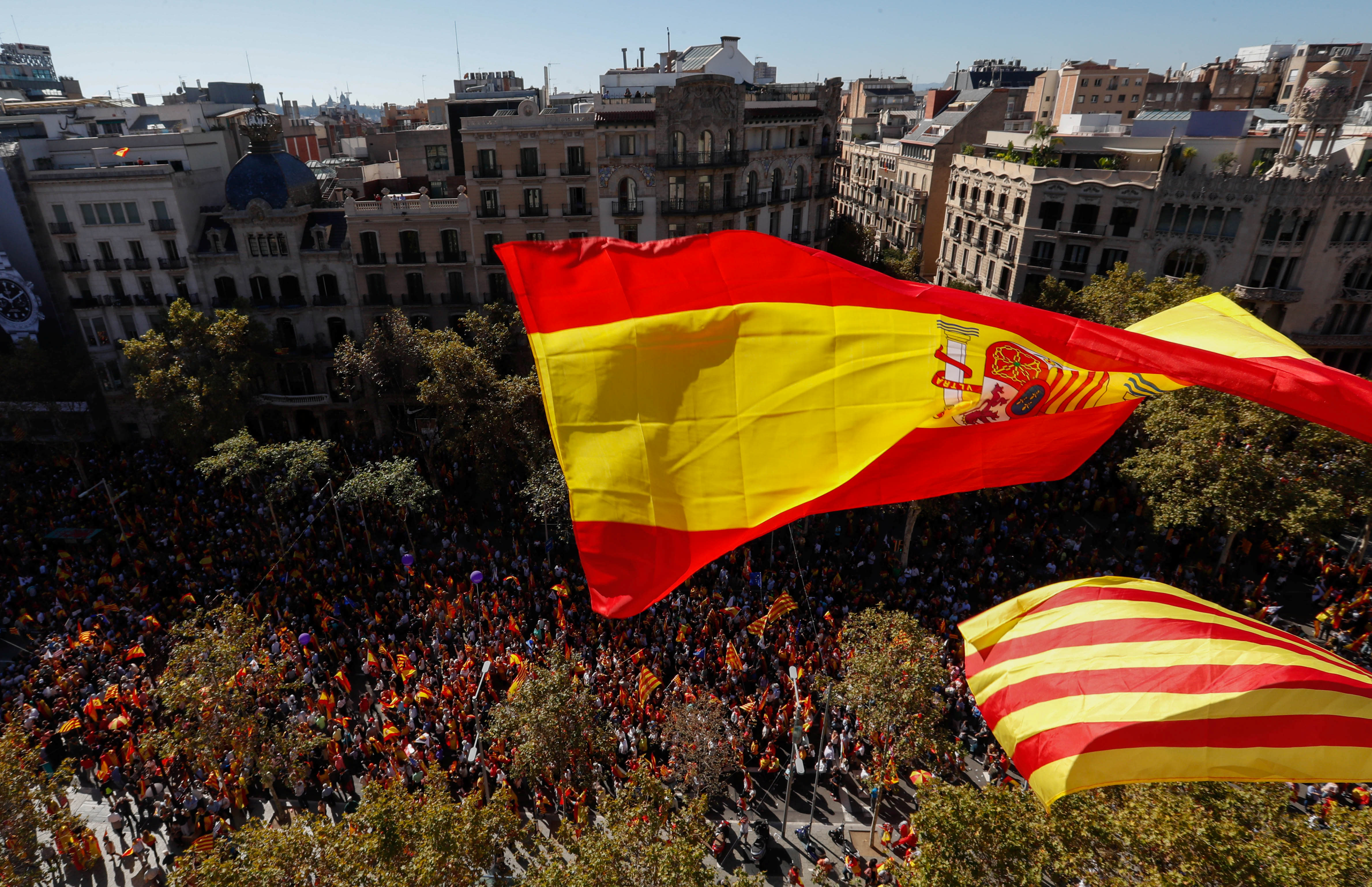 Pro-unity supporters take part in a demonstration in central Barcelona, Spain (Yves Herman / Reuters)DAMAGE TO CATALONIAPuigdemont, speaking from the Catalan nationalist stronghold of Girona on Saturday, called for peaceful opposition to Madrid's takeover. But he was vague on precisely what steps the secessionists would take as Spanish authorities move into Barcelona to enforce control.European countries, the United States and Mexico have also rejected the Catalan declaration of independence and expressed support for Spain's unity.But emotions are running high and the next few days will be tricky for Madrid as it embarks on enforcing direct rule and putting officials in administrative roles. National police were accused of heavy-handedness during the October 1 referendum.Officers of the regional police force, called the Mossos d'Esquadra in Catalan, were stationed in main public and government buildings on Sunday.But the force is believed to have divided loyalties. The central government has removed the Mossos' chief, Josep Lluis Trapero, and said units could be replaced if warranted.The main secessionist group, the Catalan National Assembly, has urged civil servants not to follow orders from the central government and to mount "peaceful resistance," while the pro-independence trade union CSC has called a strike.Since the return of democracy in the late 1970s Spain has suffered several traumatic episodes, including an attempted military coup in 1981, a violent Basque separatist conflict, and more recently an economic crisis. The Catalan issue is, however, the biggest challenge to the territorial integrity of what is now a progressive European Union nation.The chaos has also prompted an exodus of businesses from Catalonia, which contributes about a fifth of Spain's economy, the fourth-largest in the euro zone. Tourism in hugely popular Barcelona has been hit and markets have darted up and down on the fast-moving developments.European leaders have also denounced the push, fearing it could fan separatist sentiment around the continent.