Last year, head of temple said he would consider allowing women to enter if there was a machine to check if they were menstruating. 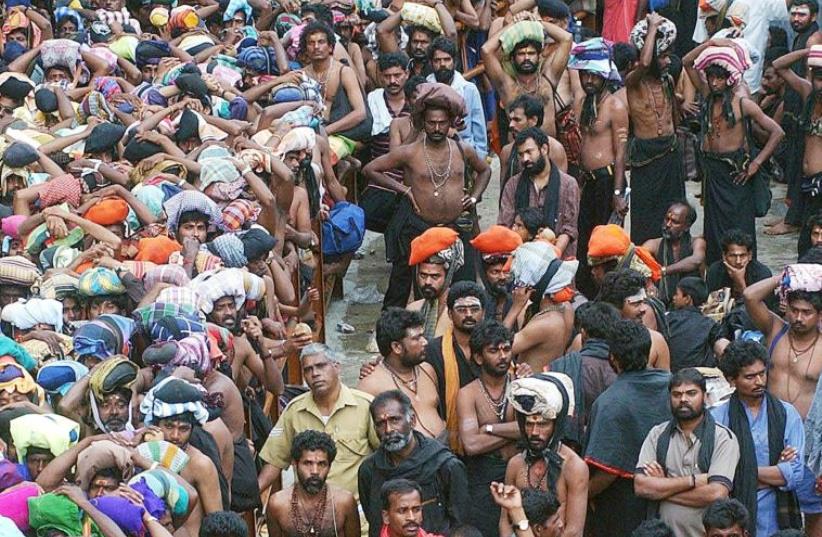 Hindu devotees wait outside the Sabarimala Temple to offer prayers for the Hindu god 'Ayyappa' in Pathanamthitta in the southern Indian state of Kerela November 20, 2002.
(photo credit: REUTERS)
Advertisement
NEW DELHI - The head of a lawyers group fighting for the right of women to enter a famous Hindu temple in southern India said on Thursday he had received hundreds of death threats warning him to drop the petition in the country's top court.The popular Sabarimala Ayyappa temple in Kerala state is one of a few in India which bar women of reproductive age, only allowing entry to girls aged under 10 and women over 50.The ban came under legal scrutiny after the Indian Young Lawyers' Association (IYLA) filed a petition in the Supreme Court seeking entry for all women, prompting the court on Monday to ask temple authorities to explain the ban.IYLA President Naushad Ahmed Khan said he had since received over 300 death threats on his cell phone - prompting police to provide him with a personal security guard."I have received more than 700 telephone calls, including some calls from international telephone, since Wednesday. These callers are (trying to) force me to withdraw the petition," Khan told the Thomson Reuters Foundation."I am the president of the IYLA, and the plea has been filed by the organization. I have never been personally involved with this petition," he said, adding that the question of whether the petition would be withdrawn had not arisen.This is not the first time the Sabarimala temple and its decades-old ban on women has hit the headlines in India.Last November, scores of women took to social media, joining a campaign launched as #happytobleed, after the head of the temple said he would consider allowing women to enter if there was a machine to check if they were menstruating.Menstruation is rarely discussed openly in both rural and urban India, and menstrual blood is considered impure. In many communities, menstruating girls and women are not allowed to prepare food or enter a temple.Khan said he did not know who the threats were from, but phone messages included threats to blow up his house. There were also messages on social media sites such as Twitter, he added.Khan said his name, photograph and phone number were posted on Twitter with a message in Malayalam, the official language in Kerala, saying "Why is this man showing so much enthusiasm for something which millions of Sabarimala devotees do not want?"An estimated one million Hindu pilgrims flock to Sabarimala in Kerala's Western Ghats mountains every year to pay homage to the deity Lord Ayyappan who meditated at that spot, according to Hindu mythology.