The president of the Jewish Affairs Committee of Indiana, which lobbied for the bill, thanked the state House for its passage. 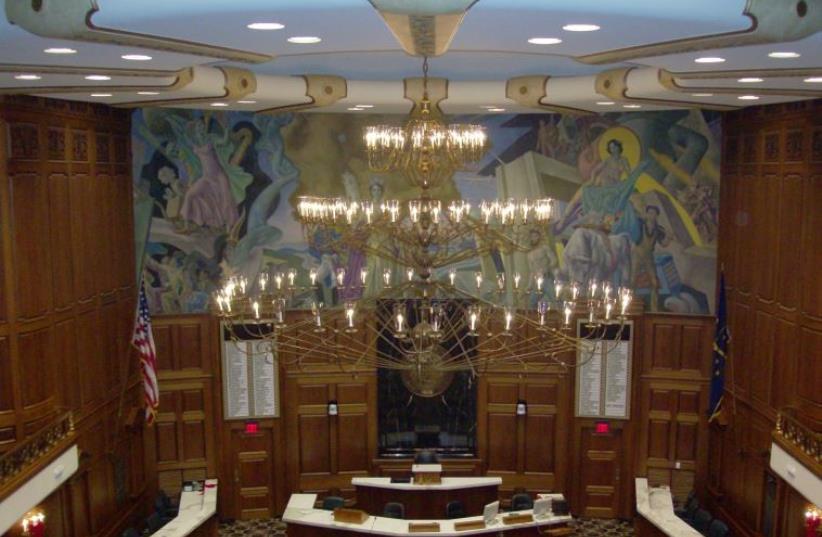 Chandelier in the House of Representatives in the Indiana Statehouse
(photo credit: XNATEDAWGX/WIKIMEDIA)
Advertisement
The Indiana House of Representatives unanimously approved a bill banning state dealings with entities that boycott Israel.The bill sent to the state’s Senate on Jan. 26 defines “the promotion of activities to boycott, divest from, or sanction Israel” as meeting the standard of “extraordinary circumstances” necessary under state law to mandate divestment from a company.The Indiana bill states that the effort to boycott, divest from and sanction Israel is “antithetical and deeply damaging to the cause of peace, justice, equality, democracy and human rights for all people in the Middle East.” The bill is one of about a dozen now under consideration in state legislatures that would counter the BDS movementThe businesses defined in the bill include commercial enterprises and non-profit organizations, which would mean that the law, once passed, would apply to universities. The Boycott, Divestment and Sanctions, or BDS, movement has focused its efforts on campuses and scholarly associations.Funds that would be mandated to divest from businesses that boycott Israel include the teachers’ retirement fund and the public employees retirement fund.Elliot Bartky, the president of the Jewish Affairs Committee of Indiana, which lobbied for the bill, thanked the state House for its passage, and noted in a statement that its sponsor, House Speaker Brian Bosma, a Republican, had led passage last year of a non-binding resolution in the House condemning BDS; a similar resolution was approved in the Senate“Speaker Bosma’s leadership role in support of Israel places Indiana at the forefront of states taking a strong position in favor of the United States’ closest ally,” Bartky’s statement said.Should the state Senate approve the bill, Gov. Mike Pence, a Republican known for his pro-Israel leadership while he was in the US Congress, is expected to sign it.