Secretary General Ronald Noble suggested that two men who boarded using stolen passports may have been smuggled by traffickers.

By REUTERS
A US Navy helicopter takes off from the USS Pinckney to assist in the search for the missing Malaysia Airlines jet.
(photo credit: REUTERS)
Advertisement 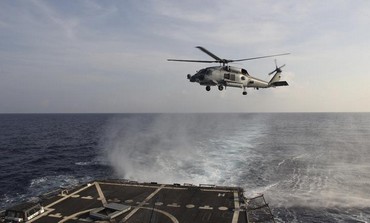 The international police agency Interpol does not believe the disappearance of a Malaysia Airlines plane was the result of a terrorist attack, its head said on Tuesday.Interpol Secretary General Ronald Noble also suggested that two men who boarded using stolen passports and had aroused suspicion may have been smuggled by traffickers.The plane, with 239 people on board, has been missing for four days and a search involving crews from 10 countries widened on Tuesday to a larger swathe of the Gulf of Thailand and South China Sea."The more information we get, the more we are inclined to conclude it is not a terrorist incident," Noble said. Two Iranian passport holders aged 18 and 29, who started their trip in Doha, had swapped their passports in Kuala Lumpur and used stolen Italian and Austrian passports to board the airliner, he told reporters at Interpol's headquarters in Lyon."We know that once these individuals arrived in Kuala Lumpur on the 28th of February they boarded flight 370 using different identities, a stolen Austrian and a stolen Italian passport," he said.Neither of the Iranian passports was reported stolen or lost.Interpol is working with member countries to follow all leads including "terrorism, organized crime, illegal movement of people, whether in the form of human trafficking or smuggling," Noble said.Making public the names of the two individuals listed on the Iranian passports - Pouri Nourmohammadi and Delavar Seyed Mohammadreza - might compel family and friends to offer tips that could allow authorities to exclude terrorism theories, Noble said."By doing this, eventually, with more and more evidence, we'll able to exclude they were involved in conduct that might have involved the plane to disappear and focus on eliminating the human trafficking ring that allowed them to travel."