By REUTERS
Iranian demonstrators carry a British flag (R) 311
(photo credit: REUTERS/Raheb Homavandi)
Advertisement
TEHRAN - Iranian police on Tuesday secured the release of six employees of the British embassy compound in northern Tehran who had been taken hostage by hardline students earlier in the day, the semi-official FARS news agency reported."Police freed the six people working for the British embassy in Qolhak garden," FARS said. RELATED:Iran body passes law expelling British ambassadorProtesters stormed two British Embassy compounds in Tehran, smashing windows, hurling petrol bombs and burning the British flag in a protest against sanctions imposed by Britain, live Iranian television showed. Iranian police clashed with the protesters who gathered in front of the British embassy compound in central Tehran and fired tear gas to disperse the crowd, the semi-official FARS news agency reported."Some students at the embassy have been injured and security forces are trying to force them out of the embassy. Some security forces have also been injured in clashes with protesters," the report said.The attacks followed the rapid approval by Iran's Guardian Council of a parliamentary bill compelling the government to expel the British ambassador in retaliation for the sanctions, and warnings from a lawmaker that angry Iranians could storm the British embassy as they did to the US mission in 1979.Several dozen protesters broke away from a crowd of a few hundred protesters outside the main embassy compound in downtown Tehran, scaled the embassy gates and went inside. Iranian security forces appeared to do little to stop them. 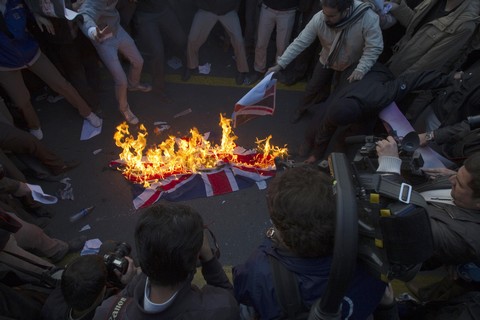 Iranian protesters burn British flag (Reuters)
The semi-official Mehr news agency said protesters pulled down the British flag, burned it, and put up the Iranian flag.Inside, the demonstrators threw stones and petrol bombs. One waved a framed picture of Queen Elizabeth, state TV showed.The British Foreign Office said it was outraged by the incursion into embassy.It was not clear if British diplomats had been caught up in the action, or had been harmed. Embassy staff fled protesters "by the back door," the Mehr news agency reported.Demonstrators waved flags symbolizing martyrdom and held up portraits of Iran's Supreme Leader Ayatollah Ali Khamenei.A separate group of protesters broke into a second British embassy compound in the north of the city, the IRNA state news agency said, and seized "classified documents".Riot police later moved in and mounted the embassy gates, helping protesters climb back on the street outside, television pictures showed, and began to slowly clear demonstrators.The incident followed Britain's imposition of new sanctions on the Islamic state last week over its nuclear program.London banned all British financial institutions from doing business with their Iranian counterparts, including the Central Bank of Iran, as part of a new wave of sanctions by Western countries.In London, Foreign Secretary William Hague said Britain expected other countries to follow its lead in imposing financial sanctions on Iran and will take "robust" action if Tehran reduces their diplomatic relations.Hague was speaking in a parliamentary debate as news broke of the incident in Tehran but he made no comment on it.