The 38-year-old Leo Varadkar, a son of immigrants, is already drawing comparisons to Canda's Trudeau and France's Macron. 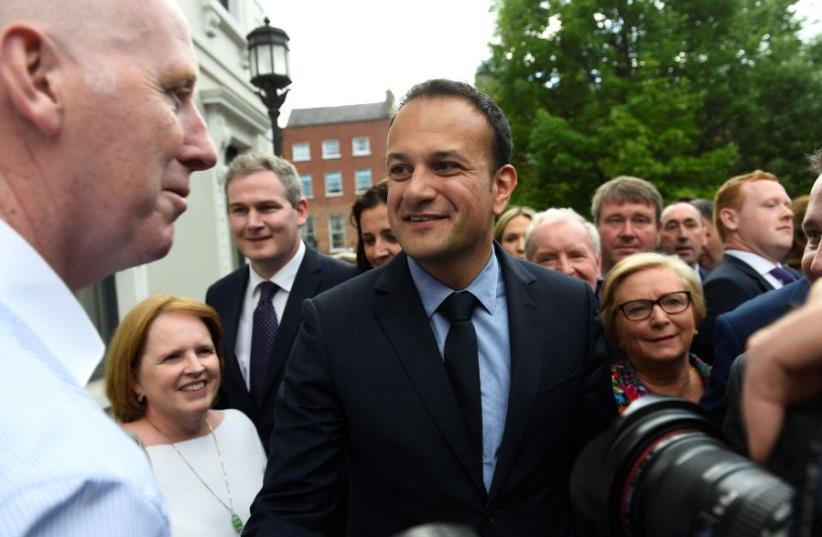 Leo Varadkar, newly elected Irish prime minister.
(photo credit: REUTERS)
Advertisement
Ireland's governing Fine Gael party elected Leo Varadkar as its new leader on Friday, choosing the gay, 38-year-old son of an Indian immigrant to succeed Enda Kenny as prime minister in a striking sign of the country's rapid social change.Varadkar overcame ministerial colleague Simon Coveney as expected, winning an overwhelming majority among the center-right party's lawmakers who hope the straight-talking Dubliner can lead them to third successive term for the first time.Bar an unexpected development, Varadkar will be voted in as prime minister when parliament next sits on June 13 and become the once-staunchly Catholic country's first openly gay premier and the youngest person ever to hold the office."If my election today shows anything, it is that prejudice has no hold in this Republic," Varadkar said to huge applause in a speech at Dublin's Mansion House, where Ireland's parliament first sat almost a century ago."I know when my father traveled 5,000 miles to build a new home in Ireland, I doubt that he ever dreamed that one day his son would grow up to be its leader and despite his differences, his son would be judged by his actions not his identity."Every proud parent in Ireland today can dream big dreams for their children," Varadkar said.His election marks another chapter in the social change that has swept through the country of 4.6 million people that only decriminalized homosexuality in 1993 but became the first country to adopt gay marriage via a popular vote in 2015.It also shows another face of modern-day Ireland. Varadkar's father Ashok, who like his son is a doctor, was born in Mumbai in India. He met his wife Miriam, an Irish nurse, in England in the 1970s before moving to Ireland where Varadkar was born.The generational shift from Kenny, 66, who led the party for 15 years and has been prime minister since 2011, will likely be matched with Varadkar's cabinet choices. Paschal Donohoe, 42, is expected to be promoted to finance minister, replacing the retiring Michael Noonan.Varadkar's opponents, who hope his blunt style will prove a liability rather than an asset to Fine Gael, were quick to claim that the current social protection minister -- who recently led a campaign against "welfare cheats" -- would move the government to the right."Leo Varadkar is a Tory. Fine Gael will be dragged even further to right under his leadership and that can only mean further hardship for ordinary people," Gerry Adams, president of the left-wing Sinn Fein opposition party said in a statement."CUT AND RUN?"Supporters, on the other hand, excitedly compare their new leader to charismatic Canadian Prime Minister Justin Trudeau and new French President Emmanuel Macron, anticipating a rebound from last year's disappointing election where they only returned to power as the senior party in a fragile minority government.Fine Gael has already received a bounce, regaining its standing as the most popular party in most opinion polls and Varadkar has pledged to hit the ground running with promises of increased infrastructure spending and further income tax cuts.However, despite inheriting the fastest-growing economy in Europe, he will have less room to boost spending and cut taxes in his first budget than Kenny enjoyed in each of his last two as Ireland seeks its first balanced budget in a decade.He will also face the diplomatic and economic challenge of Brexit, which is set to impact neighboring Ireland more than any other European Union country due to its close trading links with Britain and land border with British-run Northern Ireland.The constraints of minority rule, where Fine Gael relies on the backing of rival Fianna Fail on key votes, could also act as a brake on his ambitions, and while Varadkar has ruled out an early election, analysts are alive to the possibility."Having Leo Varadkar at the helm in the next election probably sets Fine Gael up better than under Enda Kenny, I think that's a safe bet but everyone watching Irish politics knows this is to all extents and purposes a zombie government," said David Farrell, politics professor at University College Dublin."I think the fact that he will be so tightly constrained would suggest that on balance going for an early election may be best for him. Cut and run during a honeymoon, on his terms, might be the way to go."