Is Turkey’s main opposition starting to act like one?

Even under heavy government censorship and alleged election fraud Turkish opposition might surge forward, unless a total crackdown by the government is commenced. 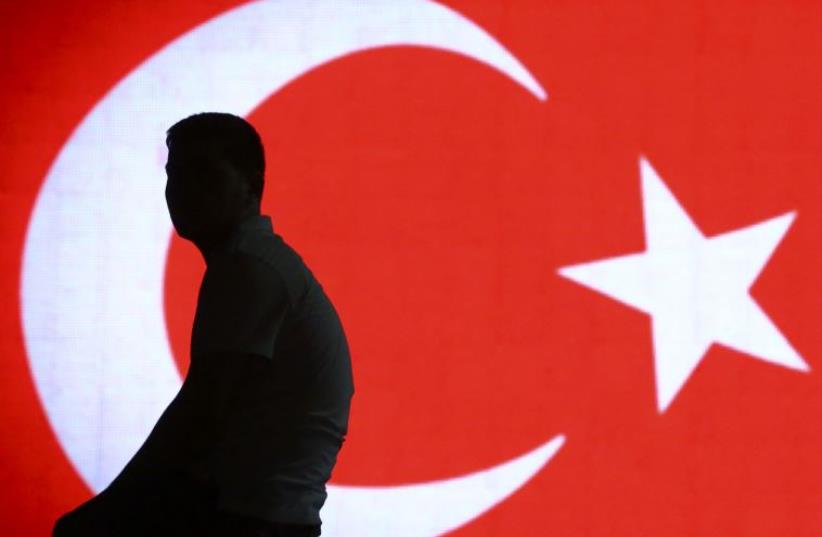 Man sits in front of Turkish flag hours after coup in Turkey thwarted
(photo credit: REUTERS)
Advertisement
The Republican People’s Party, CHP, Turkey’s main opposition party, has long lacked the political will and opportunity to effectively challenge the ruling Freedom and Justice Party, AKP. But the jailing of the first CHP lawmaker on June the 14 could potentially be the catalyst for a new chapter in Turkish party politics in which CHP takes on a more unifying role in a highly fragmented opposition.On the June 14, CHP MP Enis Berberoglu was sentenced by an Istanbul tribunal to 25 years in prison for his role in publishing pictures of the Turkish secret service allegedly delivering weapons to jihadists in Syria, despite the government’s denial of being involved in any such affair. The jailing of a Turkish MP was not unprecedented, as witnessed by the arrest of several MPs from the pro-Kurdish Peoples’ Democratic Party, HDP, ever since the parliamentary immunity ban was lifted in mid-2016. But Berberogtlu’s sentence marked the first time a deputy of the main opposition party had been thrown behind bars.And although it was related to Berberoglu’s time as a journalist, and not as a politician, it was still a very potent show of force from Erdogan. Main opposition leader Kemal Kilicdaroglu, however, did not accept the message and instead proclaimed a 480 km. “Justice March” from Ankara to Istanbul’s Maltepe Prison where Berberoglu is currently jailed. Murat Yetkin, a prominent Turkish commentator, has even described Kilicdaroglu’s march as an “almost Ghandian action.” More than 40,000 people took part in the Justice March, and a reported 1.5 million people attended the final speech of the march, that ended in Istanbul on July 9.Through the march Kilicdaroglu has stepped up to Erdogan and has mobilized awareness and sympathy from thousands of followers and millions of Turks in one of the most symbolic political gestures in Turkish politics.Even more interesting is that the rally has deepened relationships between the CHP and pro-Kurdish HDP. The two parties are increasingly putting aside ideological and ethnic disagreements in a bid to more effectively confront the Turkish government.Although one cannot expect full union, this marks an unseen level of solidarity between the two parties and perhaps a new beginning for the Turkish opposition.Kilicdaroglu’s rally has garnered the support of several HDP deputies and high-profile names. Most remarkably, Ahmet Turk, one of the most senior Kurdish politicians, voiced his support for and participation in the rally at the end of June. And he does not stand alone. Party leader and co-chair Serpil Kemalbay on June 26 said that HDP would offer “concrete support” to CHP’s march “soon.” While other elements of the HDP voiced a desire for the Justice March also to extend to and include the prison of jailed co-chair Figen Yuksekdag in Edirne, stating that if this was done, “they would believe in the sincerity” of the Justice March.Likewise, Osman Baydemir, spokesperson for HDP, during an iftar dinner on the June 14 expressed solidarity with CHP saying, “We will not remain silent like those who were silent about Demirtas,” referring to CHP’s leadership that had remained quiet on the jailing of HDP’s co-chair, Selahattin Demirtas, who was arrested on November 2016. However, seemingly unrelated, that very same night Kilicdaroglu broke his silence on Demirtas in an interview with CNN Turk stating that he might visit Demirtas in prison, and that he was a “respectable politician” – marking one of many unprecedented solidarity gestures in recent weeks.The HDP has expressed some skepticism regarding CHP’s intent, but the growing pressure from Erdogan, and the CHP realizing their mortality under his rule, has helped shaped a more communicative and cohesive opposition. And on the 19th day of the march, the HDP joined in.The trend of a closer cooperation between the HDP and CHP preceded Berberoglu’s arrest. On June 9, Kilicdaroglu paid his first-ever visit to HDP’s headquarters and met with co-chair Serpil Kemalbay – a highly symbolically important event. Kilicdaroglu also had meetings with the Homeland Party (VP), the Democrat Party (DP) and the Felicity Party (FP) as a way of constituting the bloc of parties opposing the referendum results of April 16, where a narrow majority of voters decided to change Turkey’s parliamentary system into a presidential one with weak checks and balances.And although all parties apart from the HDP and CHP do not have seats in parliament, it is highly remarkable that the CHP is rallying everything from right-wing nationalist parties to left-wing pro-Kurdish party toward a common cause, setting aside the typical deep divisions and fault lines of Turkish party politics.Furthermore, some of the parties, such as the Democrat Party, are parties with an influential history in Turkish politics, and appeal to some of AKP’s core voters, effectively providing a non-presidential religious-conservative alternative to Erdogan.CHP’s greatest challenge is its legacy as the founding father’s party.Although Kilicdaroglu has been trying to turn the CHP into a more European- style democratic and cosmopolitan party, straying too much from the path of Kemalism and losing the narrative on Turkish nationalism, which is implied in a stronger relationship with a pro-Kurdish party, could upset core voters and lead to a voter migration.Its increasingly joint action with the HDP is the tough balancing act ahead for the CHP.Opposition parties currently remain out of influence in parliament, as the state of emergency decree completely bypasses them. But it is important to keep in mind that Erdogan only won the constitutional change with 51.4% – despite the two parties sponsoring the change, the AKP and MHP, gaining 61.4% of the total votes in the November 2015 parliamentary elections.The support for the current system was secured by a very narrow margin and if the CHP successfully forms an all-inclusive opposition that converges around common interests rather than colliding on differences, it could make or break the results of the upcoming presidential and parliamentary election in 2019 – even under heavy government censorship and alleged election fraud, unless a total crackdown by the government is commenced.

The author is the Middle East editor of the Danish quarterly on international politics RÆSON. He is a student of international relations at the London School of Economics and is currently pursuing a traineeship as a Turkey analyst at Carnegie Europe.