Police have arrested at least 8 people in investigation into lone-wolf attack; British PM says assailant was British-born and known to authorities.

By REUTERS, JPOST.COM STAFF
MARCH 23, 2017 14:28
Footage of people wounded on Westminister bridge in London amid attack near British parliament (credit: DAVID SCULLION / RADOSLAW SIKORSKI / REUTERS)
Advertisement
Islamic State claimed responsibility for an attack outside Britain's parliament which left four people dead, the group's Amaq news agency said on Thursday."The perpetrator of the attacks yesterday in front of the British parliament in London is an Islamic State soldier and he carried out the operation in response to calls to target citizens of the coalition," the Amaq statement said.Islamic State, which has controlled parts of Iraq and Syria in recent years, has lost territory this year to local forces in those countries supported by a US-led military coalition. Earlier on Thursday, UK Prime Minister Theresa May said that the assailant, who was shot dead at the scene, was a British-born citizen and was once investigated by MI5 intelligence agents over concerns about violent extremism.

First photo of the Parliament terror attack suspect as he is wheeled into an ambulance after being shot by police https://t.co/WiQ5YFzVR9 pic.twitter.com/n7NISnKnkY
— Daily Mirror (@DailyMirror) March 22, 2017

Police arrested eight people at six locations in London and Birmingham in the investigation into Wednesday's lone-wolf attack that May said was inspired by a warped Islamist ideology. Forty people were injured and 29 remain in hospital, seven in critical condition.The assailant sped across Westminster Bridge in a car, plowing into pedestrians along the way, then ran through the gates of the nearby parliament building and fatally stabbed an unarmed policeman before being shot dead. "What I can confirm is that the man was British-born and that some years ago he was once investigated by MI5 in relation to concerns about violent extremism," May said in a statement to parliament."He was a peripheral figure...He was not part of the current intelligence picture. There was no prior intelligence of his intent or of the plot," she said, adding that his identity would be revealed when the investigation allowed.A man lies injured after a shooting incident on Westminster Bridge in London, March 22, 2017 (Reuters)Westminster Bridge and the area just around parliament were still cordoned off on Thursday morning and a line of forensic investigators in light blue overalls were on their hands and knees, examining the scene where the attacker was shot.The dead were two members of the public, the stabbed policeman and the attacker.It was the worst such attack in Britain since 2005, when 52 people were killed by militant islamist suicide bombers on London's public transport system. Police had given the death toll as five but revised it down to four on Thursday.The casualties included 12 Britons, three French children, two Romanians, four South Koreans, one German, one Pole, one Chinese, one American and two Greeks, May said. 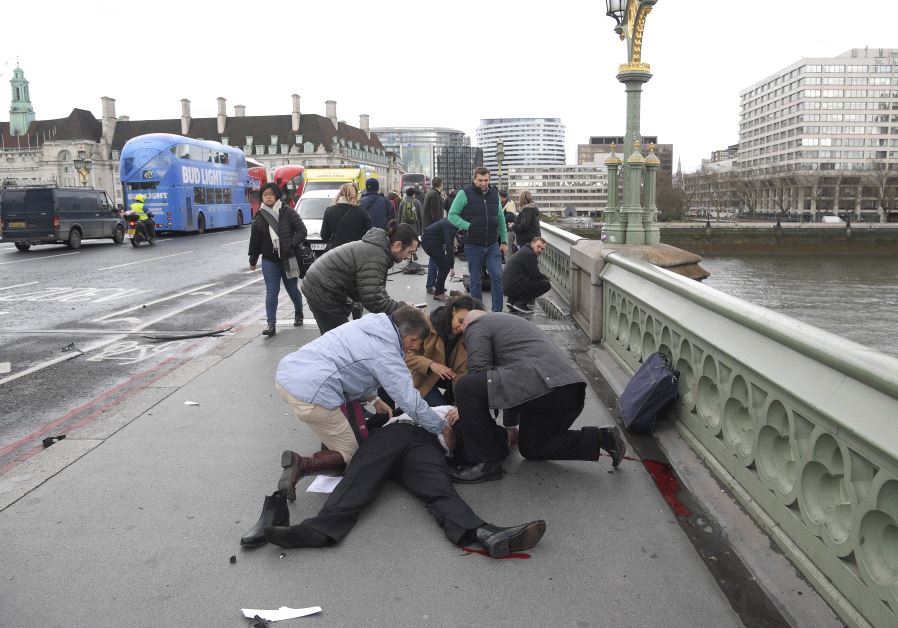 Injured people are assisted after an incident on Westminster Bridge in London, March 22, 2017. (Reuters)"We meet here, in the oldest of all parliaments, because we know that democracy and the values it entails will always prevail," she said."A terrorist came to the place where people of all nationalities and cultures gather what it means to be free and he took out his rage indiscriminately against innocent men, women and children," said May.A minute's silence was held in parliament and in front of police headquarters at New Scotland Yard at 0933 GMT, in honor of the victims -- 933 was the shoulder number on the uniform of Keith Palmer, the policeman who was stabbed to death.