Islamic State says it is behind Saturday night's horrendous attack which claimed the lives of seven and injured scores more. 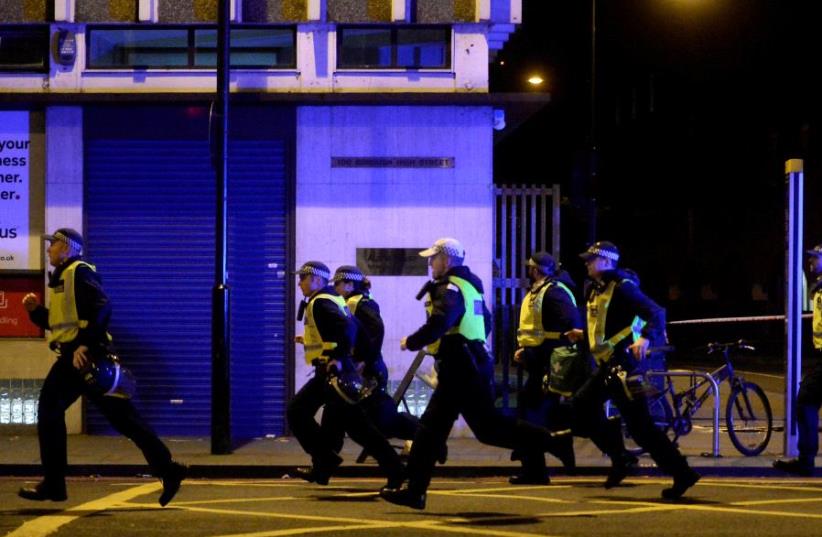 Police attend to an incident on London Bridge in London, Britain, June 3, 2017.
(photo credit: REUTERS / HANNAH MCKAY TPX)
Advertisement
Islamic State has claimed responsibility on Sunday night for the deadly attack in the British capital that claimed the lives of seven people and injured scores more. Amaq, the Egypt-based ISIS media agency, claimed that the terror group masterminded the combined attack in which three terrorists rammed into pedestrians on London Bridge and stabbed passersby in an a nearby street and bar. The militant group's agency released a statement on its media page saying that "A detachment of Islamic State fighters executed yesterday's London attack."
The London police is expected to release the details of the attackers in the coming days, and security measures have been increased in the UK, that is still reeling from Saturday night's attack which came less than two weeks after a lethal suicide bombing at a Manchester Arena during a concert by American pop singer Ariana Grande. The terrorists drove a van at high speed into pedestrians on London Bridge before stabbing Saturday night revelers on the street and in nearby bars, killing seven people and wounding nearly 50. Armed police rushed to the scene and shot dead the three male attackers in the Borough Market area near the bridge, as authorities urged Londoners on Twitter to "run, hide, tell" if they were caught up in the violence.Islamic State, losing territory in Syria and Iraq to an offensive backed by a US-led coalition, had sent out a call on messaging service Telegram early on Saturday urging its followers to carry out attacks with trucks, knives and guns against "Crusaders" during the Muslim holy month of Ramadan.Islamist militants, or people claiming allegiance to the group, have carried out scores of deadly attacks in Europe, the Middle East, Africa, Asia and the United States over the past two years.
Cell phone videos show people running for safety after London attack (credit: REUTERS)
In a speech at Downing Street on Sunday morning, British Prime Minister Theresa May that "terrorism breeds terrorism and perpetrators are inspired to attack," claiming that they are "bound together by the single evil ideology" of radical Islam. May added that the extremist ideology "is a perversion of Islam and a perversion of the truth."The British PM said that the attackers are copying one another and that the nation cannot pretend that the way things are can continue. "Defeating this ideology is one of the great challenges of our time."She stated that the Internet provides a platform to spread hate and that a global effort must be made to crack down on the dissemination of this hatred. She also said that there is too much tolerance for extremism in Britain. Daniel Altman and Reuters contributed to this report.