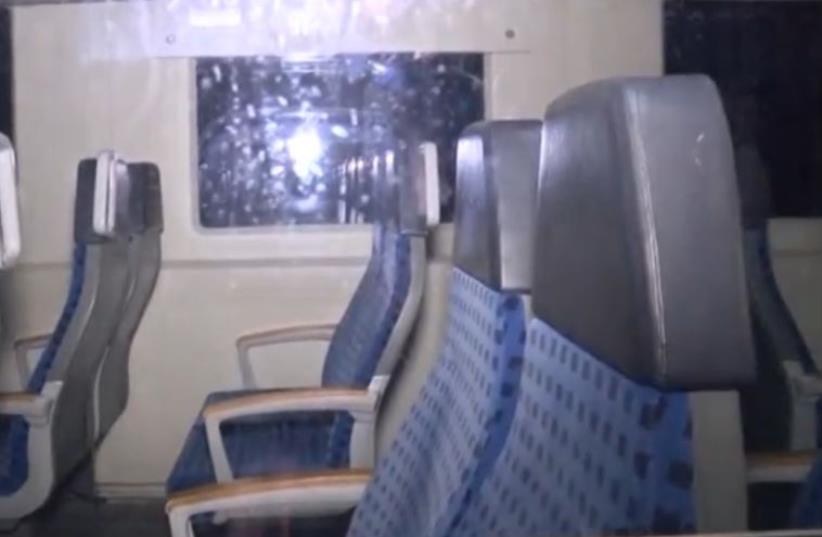 Afghan refugee axe attack wounds at least four on German train
(photo credit: screenshot)
Advertisement
Islamic State claimed responsibility on Tuesday for an attack by an axe-wielding Afghan refugee on a German train, according to its online Amaq news agency."The perpetrator of the stabbing attack in Germany was one of the fighters of the Islamic State and carried out the operation in answer to the calls to target the countries of the coalition fighting the Islamic State," the statement said. Earlier on Tuesday, the interior minister for the state of Bavaria said a hand-drawn Islamic State flag was found in the room of the 17-year-old Afghan refugee who attacked passengers on a train in southern Germany before being shot dead by police.Speaking on German public television, Interior Minister Joachim Herrmann said it was too early to speculate about the motives of the attacker, who had wielded an axe and a knife, and whether he was a member of an Islamist group or had become self-radicalized in recent times.Herrmann said two of those injured in the attacks were in a critical condition. Several of the injured included members of a Chinese family, he said, without giving any further details. Four people were severely wounded in the attack before he was shot dead by police, the interior minister for the state of Bavaria said.The attack comes just days after a Tunisian delivery man drove a 19-tonne truck into crowds of Bastille Day revelers in the southern French city of Nice, killing 84.It is likely to deepen worries about so-called "lone wolf" attacks in Europe and could put political pressure on German Chancellor Angela Merkel, who welcomed hundreds of thousands of migrants to Germany over the past year."The attacker appears to have been a 17-year-old Afghan who has been living in Ochsenfurt for some time," Herrmann said. "He suddenly attacked passengers with a knife and an axe, critically injuring several. Some of them may now be fighting for their lives."Police spokesman Fabian Hench said four people had been severely wounded and a fourth slightly injured. Several others were treated for shock.The attacker fled the train when it halted at a station on the outskirts of Wuerzburg. Herrmann said the man had tried to attack police when he was confronted and had been shot dead.German media, citing a spokesman for the Bavarian interior ministry, reported that the man had shouted "Allahu Akbar" (God is great) during the attack, but neither Herrmann nor Hench said they could confirm that."There are witnesses that suggest there may be an Islamic background to this but that is far from clear at this point," Herrmann said.Unlike neighbors France and Belgium, Germany has not been the victim of a major attack by Islamic militants in recent years, although security officials say they have thwarted a large number of plots.Germany welcomed roughly 1 million migrants in 2015, including thousands of unaccompanied minors. Many were fleeing war in countries like Syria, Iraq and Afghanistan.