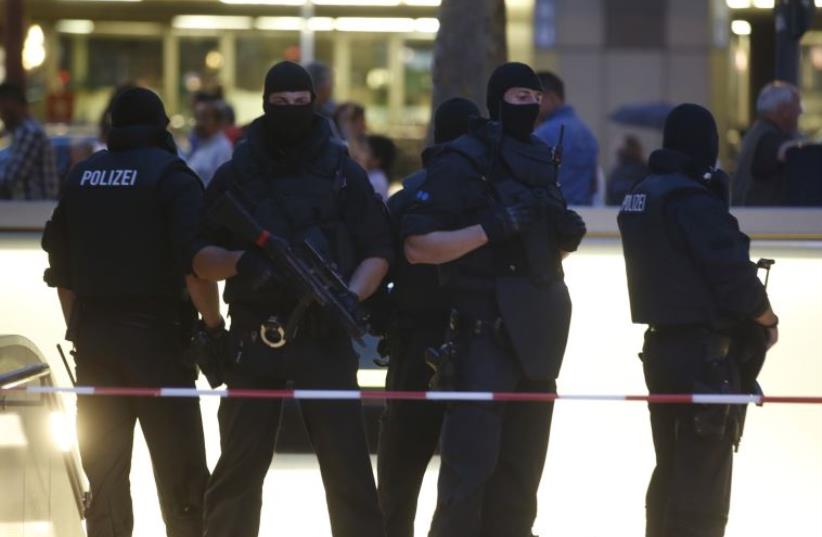 Special force police officers stand guard at an entrance of the main train station, following a shooting rampage at the Olympia shopping mall in Munich
(photo credit: REUTERS)
Advertisement
There was no immediate claim of responsibility but supporters of Islamic State celebrated the "likely terror attack" conducted in Munich, Germany Friday evening in what police believe was orchestrated by a lone gunman."Thank God, may God bring prosperity to our Islamic State men," read one tweet."The Islamic state is expanding in Europe," read another.Police said at least ten people were killed when a gunman on Friday evening attacked a busy shopping mall, spraying bullets as people fled in horror for safety from what police said was a terrorist attack. Police added that they believe the attacker had taken his own life in the aftermath of the assault. Friday's attack took place a week after a 17-year-old asylum-seeker wounded passengers on a German train in an axe rampage. Bavarian police shot dead the teenager after he wounded four people from Hong Kong on the train and injured a local resident while fleeing.German Justice Minister Heiko Maas told Bild newspaper's Friday edition before the mall attack that there was "no reason to panic but it's clear that Germany remains a possible target".The incidents in Germany follow an attack in Nice, France, on Bastille Day in which a Tunisian drove a truck into crowds, killing 84. Islamic State also claimed responsibility for that attack.Friday is also the five-year anniversary of the massacre by Anders Behring Breivik in Norway. Breivik is a hero for far-right extremists in Europe and America.The Munich assault was also reminiscent of Islamist militant attacks in a shopping mall in Nairobi, Kenya, in September 2013 and in Mumbai, India, in November 2008.