A member of a militia kneels as he celebrates victory next to a wall painted with the black flag commonly used by ISIS militants
(photo credit: REUTERS)
Advertisement

The Islamic State terrorist group claimed responsibility for the Friday attack on a police checkpoint in Ismailia, Egypt, that resulted in the deaths of three police officers. Despite Islamic State’s partial defeat in Egypt, the attack demonstrated its survival and aim to expand its reach to key locations in the country, in order to attract additional fighters.

Amaq, the Islamic State’s news agency, usually publishes claims of responsibility for the terrorist group’s attacks. It said on Saturday: “A cell of soldiers of the caliphate managed to attack an Egyptian police roadblock … with a machine gun.”

This is the first ISIS attack outside of the Sinai Peninsula in almost three years. Ismailia is a strategic city, located near the midpoint of the Suez Canal, making it a strategic place in the country.

Ahmed Soltan, an independent researcher in Islamic movements and counterterrorism focusing on Daesh, and contributor at think tanks such as the Egyptian Center for Strategic Studies and Trends research and advisory, told The Media Line that the attack might be a statement by the new ISIS leader, Abu al-Hussein al-Husseini al-Qurashi. He is the successor of Abu Hasan al-Hashimi al-Qurayshi, who was killed in mid-October by the Free Syrian Army.

“I think it is a statement by Abu al-Hussein al-Husseini al-Qurashi, as an attempt to send a message that the organization in Egypt is expanding to different territories, such as Ismailia,” he said. Thus, the central branch of ISIS in Iraq and the Levant, said Soltan, ordered its fighters to move toward the big cities in Egypt and conduct many attacks. 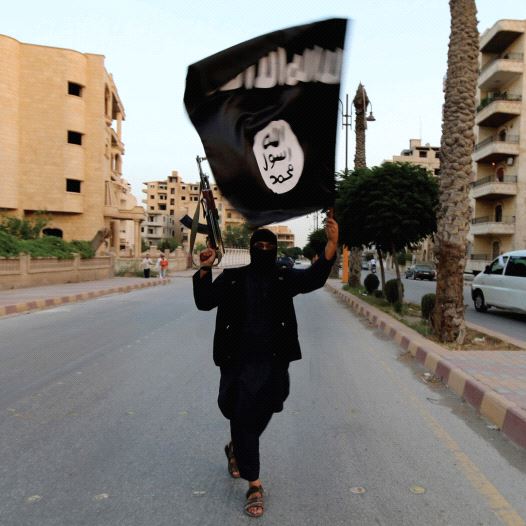 A MEMBER of ISIS waves the group’s flag in Raqqa (credit: REUTERS)

Soltan noted that, in recent months, the Islamic State in Sinai has lost big parts of its territory, and many of its fighters and leaders. Among them, Abu Kazem Al-Maqdisi, a Gazan ISIS jihadist who was one of the most prominent leaders of the organization in Sinai and was eliminated by the Egyptian forces in mid-August last year.

That is why, he explained, ISIS in Sinai is currently seen as a weak branch in the eyes of the leadership of the organization. According to Al Naba, a weekly newspaper issued by the ISIS central media office, ISIS in Sinai conducted four attacks in October and none in November, Soltan noted, adding that this is a good way to judge the extent of the power of ISIS in Sinai.

Soltan pointed out that the organization is very low in manpower. “We are speaking about dozens of fighters who conduct traditional missions, in addition to a special unit called ‘Tawasul,’ that is in charge of communication with the central branch.”

That is why he believes the Friday attack was designed to attract new fighters to enlist in their lines. “The ISIS attack in Ismailia sends a message that it can conduct attacks in special cities, and that will benefit the ISIS to recruit new fighters, as it has lost many fighters in the last years and it has collapsed in Sinai,” he said.

Mohammed Thabet Hassanin, an Egyptian researcher of Middle East affairs, told The Media Line that, in recent years, the Egyptian government has implemented various measures to combat terrorism in the country, including military operations, and legislation to freeze assets of terrorist organizations and increase the powers of the country’s security forces.

He said the Egyptian army has boosted its security measures and surveillance, and the government is making efforts to counter extremist ideology through the promotion of a moderate form of Islam, in collaboration with some religious leaders. These efforts, both military and nonmilitary, said Hassanin, “aim to address the threat of terrorism in Egypt. But it is difficult to quantify the success of these measures. I think that the Islamic State in Sinai is weak at this moment, but it has been able to survive.”

He added that the Egyptian Army cooperates with the tribal leaders in the Sinai Peninsula, who helps them track the terrorist organization’s fighters and leaders. “It is a very effective strategy,” Hassanin said, noting that the Egyptian armed forces have cleaned the areas of Rafah and Sheikh Zayed in Sinai from ISIS fighters.

He pointed out that, as the economic situation worsens in Egypt, the presence of ISIS in the country puts further pressure on the Egyptian government. “The economic issue has become closely linked to the security issue, in light of the food and energy crisis caused by the Russian-Ukrainian war,” he added.

There has been no official statement on the attack by the Egyptian government, Soltan noted, “but people in Egypt are wondering what the attack means since this is the first attack by ISIS in a big city in years.”